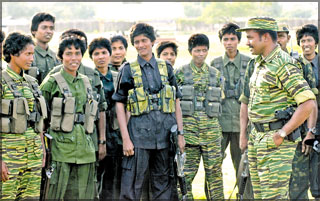 (New York) – The Sri Lankan government should act on the call by a government deputy minister to investigate war crimes by examining his own role in serious abuses.

In early March 2013, Deputy Minister Vinayagamoorthy Muralitharan, known as Col. Karuna, called for war crimes investigations into the Tamil National Alliance, an opposition coalition of ethnic Tamil political parties, presumably because some members had links to the secessionist Liberation Tigers of Tamil Eelam (LTTE). Karuna was effectively the second-in-command of the LTTE and the head of its Eastern Province forces until he broke away from the group’s leader, Vellupillai Prabhakaran, in March 2004.

LTTE forces under Karuna’s command were directly involved in some of the worst crimes of Sri Lanka’s 26-year-long armed conflict, which ended in May 2009, Human Rights Watch said. In June 1990, 400 to 600 police officers who had surrendered to LTTE forces, many of whom may have been under Karuna’s control, were bound, gagged, and beaten. The LTTE then executed the Sinhalese and Muslim police officers among them. Karuna has admitted that the LTTE committed these killings in an interview with the BBC, but claims he was not at the scene. Under the legal principle of command responsibility, though, Karuna could still be criminally liable for the massacre even if he was not physically present.

The LTTE widely recruited and used children as soldiers, which Human Rights Watch documented in a 2004 report, “Living in Fear: Child Soldiers and the Tamil Tigers in Sri Lanka.” Karuna’s forces played a prominent role, routinely visiting Tamil homes to tell parents to provide a child for “the movement.” The LTTE harassed and threatened families that resisted, and boys and girls were abducted from their homes at night or while walking to school.

After Karuna broke away from the LTTE, his forces continued to operate with the complicity of the Sri Lankan government security forces. The Karuna group, as it was known, abducted children for use as soldiers in Sri Lanka’s eastern districts, taking boys from their homes, work places, temples, playgrounds, public roads, camps for the internally displaced, and even weddings. These abuses are documented in Human Rights Watch’s 2007 report, “Complicit in Crime: State Collusion in Abductions and Child Recruitment by the Karuna Group.”

The Karuna group eventually joined forces with the Sri Lankan security forces and helped push back the LTTE’s stronghold in the east. After that, Karuna entered politics. He has been a member of parliament since 2008. His party is part of the coalition of the governing United People’s Freedom Alliance. He is currently the deputy minister for resettlement.

“Karuna has enjoyed immunity for some of the worst atrocities committed during Sri Lanka’s long conflict,” Adams said. “His threat to initiate investigations against a political party is a cynical gesture aimed at silencing the opposition while denying his own responsibility for war crimes.”
HRW