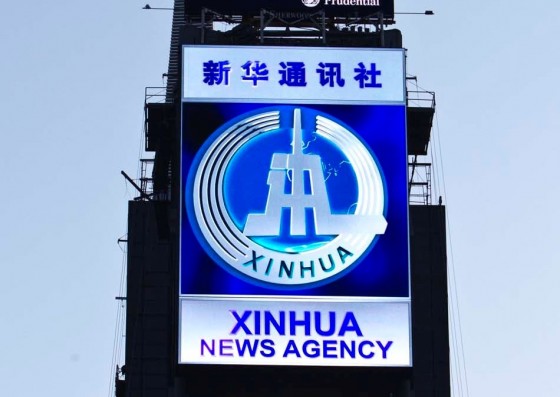 March 29 (Xinhua) — Muslims in Sri Lanka, a predominantly Buddhist country, have been living in fear over the past couple of months as comments and statements made by Buddhist monks at public rallies have led to hate campaigns, mostly using social media.
The concerns saw an online campaign being launched this week seeking the intervention of President Mahinda Rajapaksa to protect the liberties of Sri Lanka’s minorities and to defend their interests against hate speech and hate acts.

Hate campaigns began after a group of monks representing the Bodu Bala Sena demanded that the issuing of the halal certification in Sri Lanka by a Muslim group, the All Ceylon Jamiyyathul Ulama, be suspended.

Anti-Muslim messages and images were also posted on Facebook as well as other social media websites against Muslims and the halal certificate.

Muslim politician Azath Salley told Xinhua that things have gone out of control and the government is silent over the issue.

“The top monks can’t tolerate this. What is the government doing? Things have gone out of control. The Bodu Bala Sena should be brought under control,” he said.

The All Ceylon Jamiyyathul Ulama gave into the demands to stop issuing the halal certificate after at least two mosques came under attack by unknown groups during that period.

However the hate campaign has not stopped and the public have now petitioned the president to act before things get out of hand.

The petition urged the government and the police to take necessary action to stop incidents of harassment against minorities and their businesses.

Addressing a public rally last weekend, the Bodu Bala Sena insisted Sri Lanka is not a multiracial or multi-religious country but a Sinhala Buddhist country.

Speaking at the rally, the venerable Medagoda Abayathissa thero urged the Sinhalese to protect the nation and not let other races or religions to take over.

The monk also urged Sinhalese families to have at least 5-6 children so that the Sinhalese Buddhist population grows in order to protect the Sinhala race and Buddhism in Sri Lanka.

Meanwhile Secretary of the Bodu Bala Sena, the venerable Galaboda Aththe Gnanasara thera said that the country should be ready to rally against Christian and Muslim extremist groups operating in the country.

He insisted that the Bodu Bala Sena does not have issues with Muslims and Tamils as a whole. However he said that Muslim women should not be allowed to wear the Niqab in Sri Lanka.

The police however felt the hate campaign was being carried out by some individuals using mobile SMS and not any religious group.

Police spokesman Budhika Siriwardena said that action will be taken against anyone attempting to incite racial or religious hatred via SMS.

He said that the Criminal Investigations Department (CID) has already launched investigations in this regard.

The police said that a Buddhist man and a Muslim man have already been questioned for sending out SMS messages which could incite racial or religious hatred.

The Muslim Tamil National Alliance, a group led by Salley, in a letter sent to UN Secretary General Ban Ki-moon, said that radical members of the Buddhist clergy were taking the law into their hands, with the enforcers of the law watching from the sidelines.

“After the defeat of the Liberation Tigers of Tamil Ealam, the Muslims of Sri Lanka have been looking at every opportunity to bring about national unity at a time when the country is in transition. We fail to understand the failure of the government of Sri Lanka in arresting the current trend which if left to go its course, would spell disaster for the country we call our home,” Azath Salley said in the letter.

He urged the UN to draw the attention of the Government of Sri Lanka to international standards relevant to the protection and promotion of the rights of minorities.

The letter, a copy of which had also been sent to the UN Human Rights Council, said the government of Sri Lanka is failing to uphold and is pushing the country towards another holocaust.

“We urge your Excellency to take all necessary measures to guarantee that the rights and the freedom of religion or belief of the various religious communities living in Sri Lanka are respected and protected and ask of the government of Sri Lanka to adopt effective measures to prevent the recurrence of these acts,” the letter sent to the UN chief said.

However the Bodu Bala Sena dismissed reports that it was against Muslims in Sri Lanka.

He said that such reports send the wrong message and tarnish the image of the country and of the government.

The Sri Lanka Muslim Council had meanwhile written to President Mahinda Rajapaksa raising concerns regarding the recent incidents targeting Muslims in the country.

In the letter, the Muslim Council said the Muslim community has recently been targeted by extreme Buddhist groups for virulent attacks of hate and abuse on the basis of religious beliefs and cultural practices and erroneous assumptions regarding the increase in our numbers.

It said the groups who are targeting all minority religions have created a great sense of unease among Muslims throughout the country.

“Their campaign has also affected all businesses–not just Muslims–and resulted in a threat to the maintenance of law and order affecting all communities. These groups have been using the traditional media, social media, public meetings, posters, leaflets, and the circulation of rumors and misinformation insulting Muslims to inculcate a sense of fear and hatred of Muslims among Sinhalese. They are using abusive language when referring to our religious practices and publicly calling for a boycott of businesses run by Muslims,” the letter signed by the President of the Muslim Council N.M. Ameen stated.

The Jeddah-based Organization of Islamic Cooperation (OIC), the parent body of 57 member countries, had also recently expressed its concerns over the escalating ethnic tensions in Sri Lanka, which has affected the island’s Muslim community and its businesses sector.

The Saudi media reported that the (OIC) (formerly known as the Organization of the Islamic Conference) expressed its concerns amid increasing reports of ethnic tensions in parts of Sri Lanka particularly in the central province of Buwelikade, which has a large Muslim population.

The OIC pointed out that it is confident that the Sri Lankan government is taking the appropriate measures to calm the situation on the ground.