Sri Lanka president says his govt. would continue to implement the UNHRC resolution 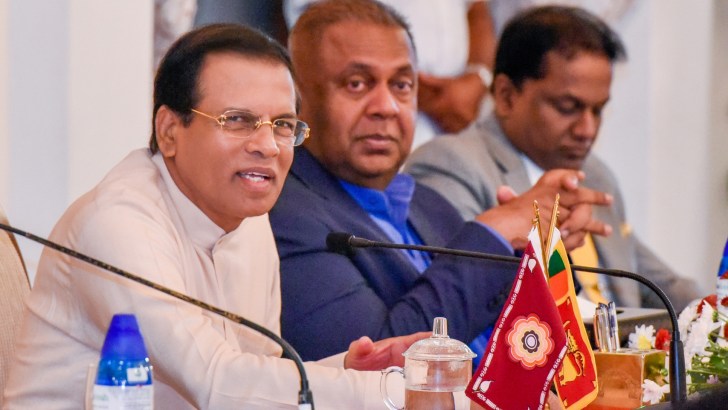 PMD News.Wednesday August 30th, 2017.
My commitment is to build SLFP as a clean, uncorrupt and principled party that gives leadership to the nation – President
President Maithripala Sirisena said he is totally dedicated and committed to build the Sri Lanka Freedom Party (SLFP) as a clean, unstained, uncorrupt and principled party that provides leadership to the nation through honest and dedicated politicians. “Although it is not an easy task as not only the body politics but also the entire social fabric is diseased with corrupt practices, I am absolutely determined to fulfill this uphill task,” he said addressing Media Heads and Newspaper Editors at the President’s House in Colombo today (August 30).

President Sirisena said that will be the significant message he wants to project to the nation on the 66th Anniversary of the SLFP scheduled for 3rd September. “The people in the country yearn for unstained politicians and my determination is to ensure that the SLFP is a party that provides such politicians to make the people’s dream a reality,” he said.

When a journalist referred to the recent bribery case in which a school principal was prosecuted after nine years, and asked if the government had any plans to speed up the judiciary process, the President replied that the he has advised the relevant ministers and officials to study the judiciary systems in different countries to find out the methods of meting out speedy justice. However, he clarified the government is committed to independence of judiciary and would not allow any interference in the judiciary process.

He pointed out that it took a long period of time for taking legal action against Marcos of Philippines, Lula de Silva of Brazil. However quick action was taken against South Korean President and she was sentenced to a prison term. Pakistani Supreme Court gave a verdict against Prime Minister Nawaz Shariff and he had to resign. All these examples show the speed in some countries and delays in other countries. We have to study and find out a suitable method, he said.

Asked about the UNHRC resolution, President Sirisena said that the government would continue to implement the agreed terms. “It is a slow process and we cannot have speedy solutions. However we have categorically stated that the government would implement those clauses while safeguarding the sovereignty and independence and only the steps that are compatible to the country would be taken.

Referring to the opposing voices in the SLFP, President Sirisena said that there are divisions within any political party and the degree of the rift changes from time to time. He said that charges against violation of party discipline are being studied and action would be taken after completion of investigations.

When asked about the future of the consensual government, he expressed confidence that the partnership would continue until 2020. Although some say their own party would a government soon, under the current composition of the Parliament no single party could form a government on its own. Even if there is another coalition, I will fulfill my responsibilities towards the people as President of the country until the end of my term, he said.