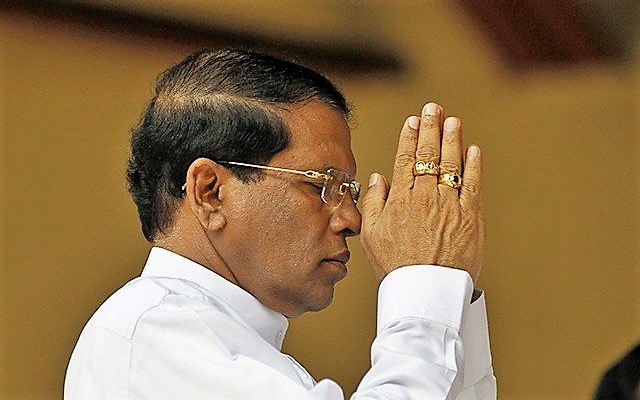 Addressing a hurriedly called press conference at the President’s House, State Minister of Finance Lakshman Yapa Abeywardene reaffirmed the President’s position. He said only logistical and IT assistance would be obtained to expedite the judicial process, when the judicial mechanism was set up to probe the alleged crimes.

Responding to journalists on the suggestions that had been made by the Consultative Task Force on Reconciliation Mechanism to include foreign judges in the judicial process that is to probe war crimes, Minister Yapa said President Sirisena was very clear on this matter and added he has more than once said there will be no foreign judges in the local judicial mechanism and it will not be a hybrid court as suggested by certain groups.

“President Sirisena and the government have full confidence in our judiciary, legal process and judges. We have extremely eminent and experienced judges and our judges have served in various countries and global organizations that have given much credit to the country.

Minister Yapa said Sri Lanka expects to submit a progress report to the UNHRC in March and explain the measures take by the unity government to promote reconciliation, rule of law, inter communal harmony and strengthen democratic institutions and the concept of good governance.

Sri Lanka’s Constitution or the Criminal Procedure Code do not provide for the establishment of a judicial mechanism with foreign judges to adjudicate alleged war crimes. As such the issue of establishing a so-called Hybrid Court does not arise and the government’s intention was to establish a credible domestic mechanism comprising of our own judges, acceptable to the local and global community.

“The government under no circumstances will target war heroes, field commanders of the three armed forces or the political leadership for war crime charges or haul them before a court or tribunal. But we have to deal with those if there are any, who have violated the International Humanitarian Law on an individual level,” he stressed. (Sandun A Jayasekera)
www.dailymirror.lk#

Justice and Buddha Sasana Minister Wijeyadasa Rajapakshe yesterday said that he was not ready to assess the Consultation Task Force on Reconciliation Mechanisms’ (CTFRM) recommendation to include foreign judges, lawyers, and investigators in the transitional justice mechanism.

“I cannot make a statement on the inclusion of foreigners in the reconciliation process right now. I can say that we have communicated our position on the issue to the UN Commission on Human Rights. We are an independent nation that can make the final decisions,” Rajapakshe said.

The minister did say, however, that it would be very difficult to include judges in the proceedings under Sri Lankan law.

“Under the Constitution, no foreigner can sit as a judge. The recommendations will be difficult to institute because of this,” he added.

Rajapakshe also hit back at the idea that those who had suffered abuse during the war had little trust in the judiciary.

“No one is complaining about the independence of the judiciary. I have full faith that the Sri Lankan judiciary can handle this important task fairly and professionally,” he said.

State Finance Minister Lakshman Yapa Abeywardena yesterday rejected a comprehensive set of proposals, including foreign judges and other personnel in accountability mechanisms to address the grievances of the war affected.

CTFRM headed by attorney-at-law Manouri Muttetuwegama dealt with contentious issues of demilitarization, lands, Prevention of Terrorism Act (PTA) as well as bifurcation of the Attorney General’s Department to pave the way for a Department of Public Prosecutions.

Secretary to the CTFRM Dr. Paikiasothy Saravanamuthu said that they wanted the government to formulate a new Act to replace the PTA in line with international standards.

Addressing the media at the President’s House, State Minister Abeywardena said that the government wouldn’t accept such proposals.

Matara District MP reiterated the UNP-SLFP coalition’s confidence in the local judiciary. “Whatever various interested parties say, we have faith in our judiciary.”

When The Island pointed out that Muttetuwegama’s outfit had been asked to come up with a formula by the government and the recommendations were in accordance with Geneva Resolution co-sponsored and unanimously adopted in Oct 2015, State Minister Abeywardena insisted that Sri Lanka no longer faced threat of sanctions and hybrid courts in the wake of Maithripala Sirisena’s victory at the January 2015 presidential polls.

State Minister Abeywardena refrained from commenting on The Island observation that the Geneva Resolution referred to foreign judges including Commonwealth members.

State Minister Abeywardena said that the country was moving ahead under President Maithripala Sirisena’s leadership. The international community had changed its attitude towards Sri Lanka in the wake of the introduction of the 19 Amendment, he claimed.
www.island.lk