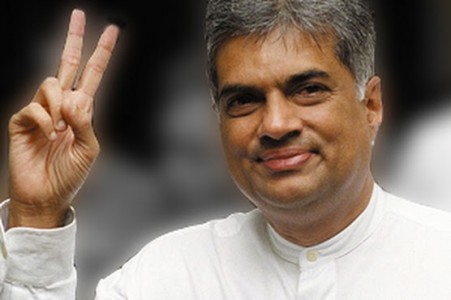 ECONOMYNEXT – A last ditch attempt by President Maithripala Sirisena to oust Prime Minister Ranil Wickremesinghe has failed due to a constitutional hurdle and more significantly the lack of parliamentary support, sources close to both sides said.

President Sirisena had agreed to continue working with Wickremesinghe, but had a sudden change of heart on Thursday after meeting with his United People’s Freedom Alliance (UPFA) and Sri Lanka Freedom Party (SLFP) seniors.

The two general secretaries of the parties, ministers Mahinda Amaraweera and Susil Premajayantha told reporters that neither of them could work under Wickremesinghe and insisted that they would not be in a cabinet with him.

dream of being the leader of an unadulterated UPFA/SLFP cabinet was reinforced by his nemesis Mahinda Rajapaksa pledging conditional support.

The charismatic former president controls at least 56 members of parliament out of the 96 elected under the UPFA ticket, but even together they do not have an absolute majority of 113 seats required to constitutionally topple Wickremesinghe.

A senior official close to Sirisena said the president had been misguided by a senior lawyer who had advised him that he had the power to sack Wickremesinghe the same way he unceremoniously dismissed D. M. Jayaratne in January 2015.

However, he was told that the President’s power to dismiss the Prime Minister was taken away by the 19th amendment to the constitution. Some have argued that the president could sack the entire cabinet and thus the PM too would lose his job, but there is no provision to under Articles 48 (as specified in the 19th amendment) to remove the cabinet in toto.

Aides have argued that Sirisena could have pressed ahead ignoring constitutional provisions if he had an absolute majority as in the case of Mahinda Rajapaksa who used his executive power and the huge parliamentary majority to impeach chief justice Shirani Bandarayanake in 2013 using highly questionable means. In less than three weeks into office, Sirisena’s administration in January 2015 overturned the impeachment of Bandaranayake using equally controversial means, but thanks to a steamroll majority in the House.

Realising both the legal impediments and the lack of a parliamentary majority, the once gung-ho UPFA ministers went silent over the weekend with their efforts at a constitutional putsch backfiring and raising questions about their tenure in the National Unity government.

UPFA general secretary and minister Amaraweera had told the president in writing that no SLFP/UPFA member, himself included, could be in a cabinet with Wickremesinghe, a sentiment articulated over national television by Premajayantha.

While President Sirisena cancelled his meeting with senior editors on Friday, Wickremesinghe hosted senior journalists to tea at Temple Trees after a no-holds-barred press conference where he categorically declared that he will remain but with changes in his party and the cabinet.

In sharp contrast to the president’s camp, Wickremesinghe was careful not to criticize the president or his SLFP ministers. When asked how he could have Messers Premajayantha and Amaraweera in a future cabinet, Wickremesinghe said: “It is coalition politics. We have to get used to it. It was a little difficult for everyone at the beginning, but not anymore.”

He said the president had told him that he was spending the weekend at his home constituency of Polonnaruwa and they would discuss the composition of the new cabinet in the coming week. He expected the process of finalizing a new cabinet of ministers to take over a week.

Parliament meets on Tuesday for the first time after the February 10 local government elections and should the UPFA and the SLFP have sufficient numbers to oust Wickremesinghe they have no impediment to submiting a no-trust resolution against the premier.

Despite UPFA attempts to push Nimal Siripala de Silva as a successor to Wickremesinghe, the somnolent transport minister made no public comments about accepting high office. Instead, he was attending temple ceremonies and offering poojas for good luck, a source close to him said.

Shortly after the local government election results showed that Wickremesinghe’s UNP had suffered a drubbing, the premier was under pressure from within the party to step down.

However, the final results were not as bad as initially feared and Wickremesinghe was slowly able to rally support and keep disgruntled elements under check. A party senior said he also earned sympathy from the rank and file after a private media channel went out on a limb to personally attack him.

“The media campaign against Ranil was an overkill and many people who saw the live coverage ended up feeling that he was unfairly targeted and began to rally behind him,” the source said.

Wickremesinghe himself told reporters on Friday that he accepted responsibility for the electoral humiliation and was carrying out a restructuring of the party. He said the leadership was in “transition without disruption” and wanted younger members to take a leading role.

He also admitted that the fallout from the bond scandal and his government’s failure to prosecute high profile members of the previous regime accused of corruption were key factors.

He said he had taken on board the powerful warning from the electorate and was on a course correction to swiftly deliver on electoral promises made three years ago to bring to justice those responsible for killings and corruption. (COLOMBO, February 16, 2018)