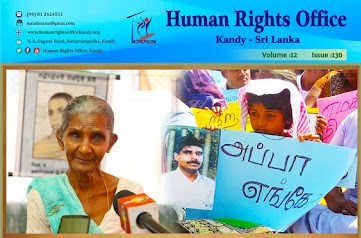 Image: the event was organised by HRO Kandy an police banned it saying it may cause disunity amongst different ethnic groups.

Human Rights Office Kandy (HROK) had organized an event to celebrate international Human Rights Day on 11th December 2021 in Kandy, based on the theme “Ensure the Prisoners their Dignity and Rights to Human Conditions”. As in previous such events, a significant part of the event was presenting tokens of appreciation to 22 families of prisoners for their long years of struggles in contributing to advocate for fair trials and rule of law while dealing with emotional, financial, social and other challenges of having a family member behind bars as suspects, accused and convicts.

Those receiving appreciations were ones whose family members court cases have been concluded, but they have started to work together as a group and continued to be engaged with HROK. They had also become human rights defenders and started to help other survivors and victim families.

On 9th December, the Kandy police had called the Director of HROK and said a court order was issued to stop the event. The Director was not in his usual residence and had informed the police where he was, but despite promise to deliver it in the evening, this was not done. The Director had twice visited the police to obtain the court order, but this was not handed over citing various reasons. However, the venue which had been rented by HROK to host the event had informed HROK that a court order had been served on them to stop the event from taking place.

Eventually, the police had handed over the court order to HROK’s Director on 10th December. The two court orders addressed to the manager of the venue for the event and to the Director of HROK were identical. They were dated 9th December 2021 and issued by the Additional Magistrate of Kandy, and citing 106 (1) of the Code of Criminal Procedure Act. The orders had prohibited the event on 11th December, saying it may cause disunity amongst different ethnic groups.

On the morning of 10th December, the Director, along with a lawyer from HROK had met the Senior Deputy Inspector General (SDIG) of Police to discuss the matter. HROK had provided detailed information about the event and their work and the SDIG had advised them to hold the event on a later date and desist from presenting tokens of appreciation to families of LTTE related suspects / accused / convicted.

Also on 10th December, HROK had filed a motion in the Kandy Magistrate court seeking to quash the court order issued on 9th December, presenting detailed information about the event and HROK’s work. As per the procedure, HROK had tried hard to handover notices of this to the police, but they had failed to do so. In the end, the Magistrate had heard the submissions of HROK without presence of the police and had not quashed the order.

In this light, and also considering advise of the SDIG, HROK was compelled not to hold the event on 11th December. This had meant cancelling elaborate arrangements made. The most difficult part was to inform the recipients of awards, for whom this was a very important event they were eagerly looking forward to, with some having purchased new clothes and some having started their journeys from far away and on verge of starting their journeys. Others attending the event from around Kandy and other districts had also started to come to Kandy and expressed disappointment.

HROK is holding internal discussions about next steps, including the possibility of holding the event on another date and any changes that maybe required to the nature of the event.

Background: HROK is a human rights group based in Kandy in the Central Province of Sri Lanka, started in 2008. It is a Catholic church-based group in the diocese of Kandy (Central Province), The founder and director is Rev. Fr. Nandana Manatunga, a Catholic Priest and winner of the Gwanju human rights award in 2018 and it has been backed by the Catholic Bishop of Kandy, along with national and international networks. The core group of HRO is a small team of staff, a support group that includes medical personnel, counselors and lawyers. They have been working with families of disappeared, survivors of rape, torture and also their families.

These include persons from different ethnic and religious groups and from different districts. The work includes legal support, psychosocial support, national and international campaigns and advocacy, organizing, mobilizing and empowering survivors and victim’s families in struggling for justice, educating religious leaders and students about human rights etc. One of their major areas of work has been the prison ministry, and they have been working closely with prisoners, those released, families of prisoners, prison officials and National Catholic Commission for prison ministry, presently headed by the Catholic Bishop of Galle. Amongst the key events they have organized is celebration of International Human Rights Day in December, which often involves human rights related activities with students and appreciating the role of survivors, victim’s families and human rights defenders through awards.

Past award winners have included men and women from different ethnic and religious groups, clergy, lawyers, journalists, government officials etc. HROK’s work has been subjected to surveillance for number of years by intelligence agents and on several occasions, intelligence agents had questioned staff and other supporters about their work. This became more intense in 2021, when two staff members were summoned for questioning in Colombo by the Counter Terrorist Investigation Department (CTID) on two separate occasions. The questioning had been very intense and probing. Inquiries had also been made about other staff members and there were indications other staff members may also be summoned for questioning.