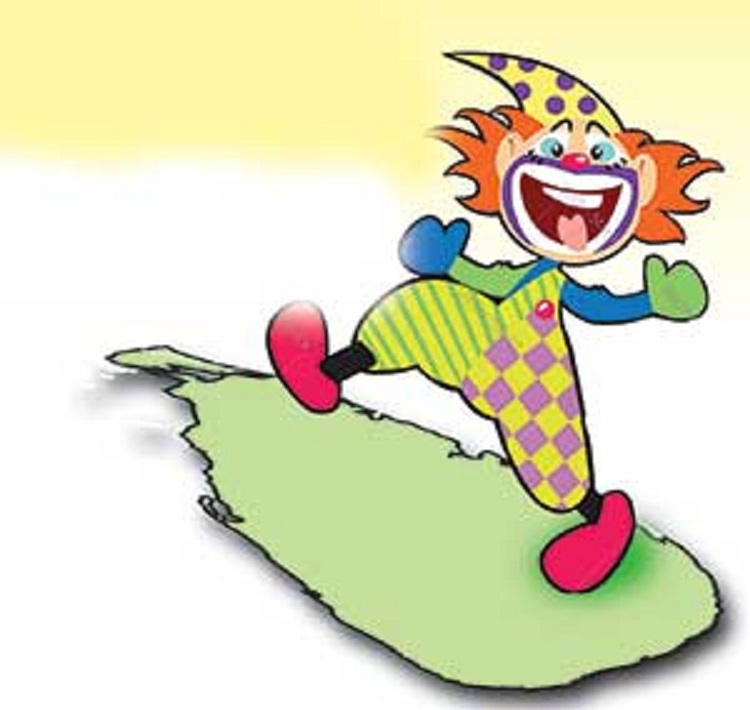 The IGP has certainly been joking in uniform, from meditation to dancing, making one wonder what happens to a decent society and law enforcement. He is the stuff of debate among the top two in the country – the President calls him a joker, and the Prime Minister is full of praise for his work. Is it any surprise this joker praises the Prime Minister and the so-called yahapalana or good governance that we have? He must be thinking of many more Bodhi poojas to help him keep his joking office, just as such poojas helped him get this top uniform.

The joker in the news today is just one of so many who are joking their way in politics, governance, administration, trade unions and even in games, a society where jokers are gaining the lead in all activities.

The country is in a foreign exchange crisis – and belt tightening is becoming the must for the people. But, just now the Prime Minister and his wife are in Norway… not to bring us any free fuel or cheap products to ease the lives of the people. Just after that, the President (possibly with some of his family, too) will be in the Seychelles … just to add one more destination to what must be a world record in international travel for any elected president of a democracy.

Should we not call this a joke, and are these two leaders any better or lesser jokers than the IGP?

A country angry at the wasteful expenditure in importing luxury cars for Members of Parliament, as well as their costly privileges, is told that to face the current exchange crisis the Duty Free import permits for cars has been suspended for MPs. Sheer bunkum. All of them – 225 and a few more – have got their duty free vehicles, which they can import once in five years. They just have no opportunity to get any more before parliament is dissolved. That is the truth. What a big joke to play on the people, that MPs can’t import duty free luxury travel due to the fall of the rupee? Those who send such messages believe the people are ready to believe their constant joking on public policy.

President Sirisena recently told the United Nations General Assembly about the need to let Sri Lanka solve her own problems, without any international interference or involvement. Sounds good to many. But what has he done about it? Does he not know that the UNHRC Resolution on Sri Lanka is co-sponsored by Sri Lanka and the US? Was he showing the world that Sri Lanka is a fun performer on the international stage? Is he any better joker than the IGP who serves under him? Just have a laugh or two.

Former President, Mahinda Rajapaksa, who will soon lead the opposition Sri Lanka Podujana Peramuna (SLPP), continues to joke with his loss of memory on corruption that prevailed during his regime. He does not think it is a joke to keep lining up constantly his son Namal as the next leader of the country. There are many jokes doing the rounds about the crooked role of the former family of power, but, it looks like the biggest joke is still to come for the country, if another Rajapaksa, with a citizenship alignment to Donald Trump, really seeks to be the next president of Sri Lanka.

There are jokers galore in this country. One could hardly find any politician, elected or not elected so far, who is not involved in the some commission racket or the other. The commissions that politicians make are just their joke in society, how they can fool the people. There are huge jokers both in government and the opposition. The dirtiest jokers in politics are those who were defeated in the last general election, but crept their way into parliament and portfolios, too, at a huge profit to themselves and a mighty loss to the people.

In case you think our medical doctors are beyond the line of jokers, just think of the Sri Lanka Medical Council (SLMC) and the Government Medical Officers Association (GMOA). They, together, carried out such a travesty in refusing to register qualified medical students as doctors that the Supreme Court had to use the legal whip on them. These medical performers have now emerged as bigger jokers than politicians. The political medicine they prescribe is destructive to society.

The jokers are spread all over today. They rise from local government bodies to provincial councils to parliament, and to all branches of administration, into the professions and law, medicine and many more, and the game of cricket, too. Shouldn’t we be reminded of the Pied Piper of Hamelin? The townspeople who hired a rat catcher to lure away the vermin, saw him return soon after and to lure away their children.

The people elect politicians to protect society from the crooked. They soon show their form as the crooked jokers of society, the cheaters, deceivers and beguilers – turning this former Paradise of the Orient into today’s Paradise of the Jokers.