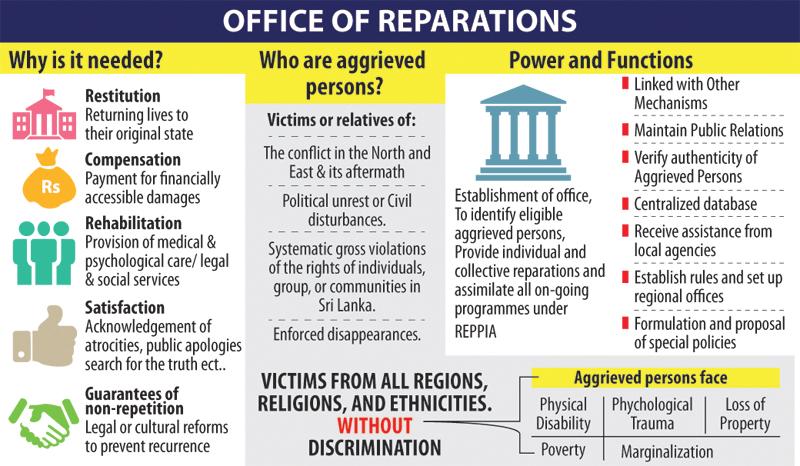 Image courtesy of the Sunday Observer.

The Office for Reparations Bill was passed in Parliament with a narrow margin on 10th Oct 2018. It received 59 votes in favour and 43 votes against in a parliament which has 225 members. The national socialist JVP absconded, reports the Island.

The Office for Reparations Bill was passed in Parliament yesterday with a majority of 16 votes.

It received 59 votes in favour and 43 votes against following a division called by the Joint Opposition. The UNP, SLFP members in the government and TNA voted in favour of the Bill. The JVP MPs were absent. The Joint Opposition together with the ‘SLFP Group of 15’ voted against the bill.

The bill was moved for the debate by Prime Minister Ranil Wickremesinghe. Foreign Affairs Minister Thilak Marapana moved at the end of the debate. The definition of “aggrieved persons” in the Bill was amended in conformity with the Supreme Court determination.

The Office for Reparations will be the second official mechanism to be set up to deal with missing persons issue and post-war allegations.

The Bill enables the provision of individual and collective reparations for aggrieved persons. As per the Bill, “aggrieved persons” mean persons who have suffered a violation of human rights or humanitarian law, their relatives and missing persons.

The scope of legislation applies to the conflict in the North and the East, as well as “any political unrest or civil disturbance, systematic gross violations of the rights of individuals, groups or communities of people of Sri Lanka, and enforced disappearances”.

Under the “individual reparations”, the bill facilitates any monetary payment or material benefit provided to an aggrieved person, micro-finance and concessionary loans, educational programmes, training, and skills development programmes, administrative assistance, and welfare services including psycho-social support provided to an aggrieved person, measures of restitution, including the provision of land and housing, and other appropriate measures identified by the Office for Reparations.

The Rehabilitation of Persons, Properties and Industries Authority Act No. 29 of 1987 will be repealed by the new Bill.