Sri Lanka: No amount of time will allow truth, justice and accountability to be established domestically so long as rule of law is subverted 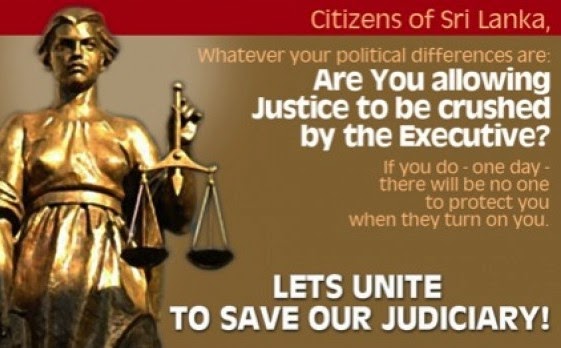 ”From our experience we know that no amount of time will allow truth, justice and accountability to be established domestically so long as rule of law is subverted and an environment of human rights abuse and impunity prevails. In such circumstances, pursuant to its mandate to address violations of human rights, including gross and systematic violations, the Council must lose no time in instituting an international mechanism to independently investigate allegations of serious violations in Sri Lanka. Moreover, the High Commissioner’s call for investigations represents the natural progression of the Council’s efforts on Sri Lanka in the last two years. ”

We call your attention to Sri Lanka as human rights groups based in the global South. In the past few years several calls have been made for independent, international investigations on allegations of international human rights and humanitarian law violations in Sri Lanka. Notably many of these calls have also come from within Sri Lanka. We welcome the endorsement of these calls by the UN High Commissioner for Human Rights in her report1 to the 25th regular session of the UN Human Rights Council. As civil society organisations based in the global South we call upon Council members, particularly those from the global South, to support this call and vote for an independent, international investigative mechanism on Sri Lanka. In Specific, we urge you to strengthen the currently tabled draft resolution2 by including adequate provisions for the establishment of an independent international investigative mechanism.

Successive reports by the UN, beginning from the 2011 UN Panel of Experts on Sri Lanka3, have demonstrated that allegations of humanitarian and human rights law violations during the last phase of the civil war in Sri Lanka are credible. The High Commissioner’s recent report is the latest in this series of reports. We believe that it is now imperative for the UN to probe for accountability as the findings in these reports clearly show the urgency for this. We stress that any attempts on investigation and fact finding by the UN should come with a clear mandate for establishing accountability in Sri Lanka.

The climate of impunity that surrounded Sri Lanka’s long period of war is yet to end. The Council’s resolution4 last year commented on a number of ongoing human rights abuses in the country. It reiterated recommendations made two years ago by a domestic commission to, among others, investigate widespread allegations of extra-judicial killings and enforced disappearances, protect freedom of expression, strengthen independent institutions, implement rule of law reforms and demilitarise the North of Sri Lanka.

Actual change on the ground is the true indicator of Sri Lanka’s level of cooperation with the Council and such change is conspicuous by its absence. Allegations of extrajudicial killings and disappearances are yet to be credibly probed. In the meanwhile all human rights defenders including those working on disappearances are facing continuous intimidation. Similarly journalists and dissenters have been threatened while freedom of expression remains deeply affected. Just months before the aforementioned resolution at the Council, the independence of Sri Lanka’s judiciary was severely compromised through a flawed impeachment of the then Chief Justice. No steps have been taken to reverse this and other independent state institutions including the Human Rights Commission of Sri Lanka remain compromised. There have also been no moves by the government to repeal abusive laws such as the Prevention of Terrorism Act, 1979. The North and East of the country remain heavily militarised and the military continues to occupy civilian land, interfere with civilian administration and promote a climate of oppression in the region. Despite the Council’s scrutiny of Sri Lanka in the last two years, there have been no meaningful outcomes on the ground.

As we write to you, human rights defenders are being subjected to a new wave of threats and intimidation even as the Council sits in session. Last week a 13 year old girl and her mother were taken into custody in the North of Sri Lanka.5 Both of them had been at the forefront of calls against disappearances in Sri Lanka and the mother still remains detained. Two prominent human rights defenders, Ruki Fernando and Father Praveen Mahesan who attempted to identify the circumstances of this incident themselves were detained,6 it is believed, under the abusive Prevention of terrorism Act on Sunday and released on Tuesday.7 These detentions can be construed as part of a wider pattern of reprisals to cast a chilling effect on Sri Lanka related discussions at the Council. During the first week of the Council’s current session, Sri Lanka’s state run television channel Rupavahini attacked Sri Lankan NGOs that wrote jointly to the Council on violations. The broadcast included pictures of the civil society leaders involved.

It is clear that currently within Sri Lanka there is neither a conducive, democratic environment nor the necessary political will required for credible domestic investigations of human rights abuses in general, including wartime abuses. Nearly five years after the war, there has been no implementation of even the few constructive recommendations on accountability issues made by Sri Lanka’s domestic ‘Commission of Inquiry on Lessons Learnt and Reconciliation’ (LLRC)8 –which was widely criticised for being inadequate and not meeting international standards.

The underlying presumption in the Sri Lankan government’s written response9 to the High Commissioner’s latest report is that there are robust democratic processes within the country. The government asserts that, bodies such as civilian and military inquiry commissions; the Press Council; Human Rights Commission of Sri Lanka; the judiciary and the police are either investigating current allegations of human rights abuses or are available for any future complaints to be investigated and resolved. In this vein, the government repeatedly relies on technical legal and administrative processes underway to counter outstanding issues. All these entities and processes can only be presumed to work effectively within a democratic set-up. We wish to emphasise that Sri Lanka does not possess the democratic milieu in which these institutions, bodies and processes can be meaningful. From independent assessments undertaken within Sri Lanka on the state of the country’s democratic institutions, it is clear to us that power has been unconstitutionally centralised with the Executive. As a result, checks and balances required for independent and credible investigations do not exist in the country.10 In our minds these findings from within Sri Lanka clearly discredit the government’s arguments against the Council’s scrutiny. We strongly urge you to consider this important aspect in your deliberations at the Council.

In its defense, at the 24th regular session of the Council, Government of Sri Lanka projected the successful election of representatives to the Northern Provincial Council (NPC) as a major step towards change. Several member states welcomed this development. Following this there were widespread reports of intimidation and harassment of elected officials of the NPC and proposals for devolving powers remained unimplemented. In January 2014 the Northern Provincial Council passed a resolution calling for an international inquiry into alleged human rights and humanitarian law violations.11

From our experience we know that no amount of time will allow truth, justice and accountability to be established domestically so long as rule of law is subverted and an environment of human rights abuse and impunity prevails. In such circumstances, pursuant to its mandate to address violations of human rights, including gross and systematic violations, the Council must lose no time in instituting an international mechanism to independently investigate allegations of serious violations in Sri Lanka. Moreover, the High Commissioner’s call for investigations represents the natural progression of the Council’s efforts on Sri Lanka in the last two years. If states do not fully heed this call it will amount to lowering a threshold the body has set for itself. We fear that such a signal from the Council will only bolster ongoing human rights abuses and encourage further break down of democracy in Sri Lanka. Given this context, we call upon Southern states to play a prominent role at the 25th regular session of the Council in supporting the establishment of an independent, international investigative mechanism on Sri Lanka that is capable of producing accountability.

Please accept the assurance of our highest consideration

The Commission for the Disappeared and Victims of Violence (KontraS)

Working Group On Human Rights in India and the UN (WGHR)

3″ Report of the Secretary-General’s Panel of Experts on Accountability in Sri Lanka, available at http://www.un.org/News/dh/ infocus/Sri_Lanka/POE_Report_Full.pdf

8″ The report of the Commission is available at www.llrcaction.gov.lk/reports/en/Final_LLRC_Report_en.pdf

10″ For example the 17th Amendment to the Sri Lankan Constitution requires that appointments to Sri Lanka’s independent institutions (such as the Sri Lanka Human Rights Commission, the Judicial service Commission, the National Police Commission etc..) are to be made by an independent Constitutional Council. Since 2005 the current President of Sri Lanka has suspended the Council and makes direct appointment to these bodies seriously undermining their independence. In 2013 Sri Lanka’s Chief justice was removed by the legislature through a legally flawed process undermining the independence of the judiciary. Bodies formed by Sri Lanka to conduct inquiries have been found ineffective over the past many decades, however, Sri Lanka continues to form inquiries often to be used as an administrative cover for impunity. For more information produced domestically within Sri “Lanka on these issues see below:

For independent analysis from within Sri Lanka on the implementation of LLRC recommendations see: Commentary on the Progress Achieved in Implementing the National Plan of Action to Implement the Recommendations of the Lessons Learnt and Reconciliation Commission, Center for Policy Alternatives, February 2014: http://www.cpalanka.org/commentary-on-the- progress-achieved-in-implementing-the-national-plan-of-action-to-implement-the-recommendations-of-the-lessons-learnt-and- reconciliation-commission/

For independent analysis on the judiciary from within Sri Lanka see: A systemic crisis n context: The Impeachment of the Chief Justice, The Independence of the Judiciary and the Rule of Law in Sri Lanka, Center for Policy Alternatives, April 2013: http://www.cpalanka.org/the-impeachment-of-the-chief-justice-the-independence-of-the-judiciary-and-the-rule-of-law-in-sri- lanka/