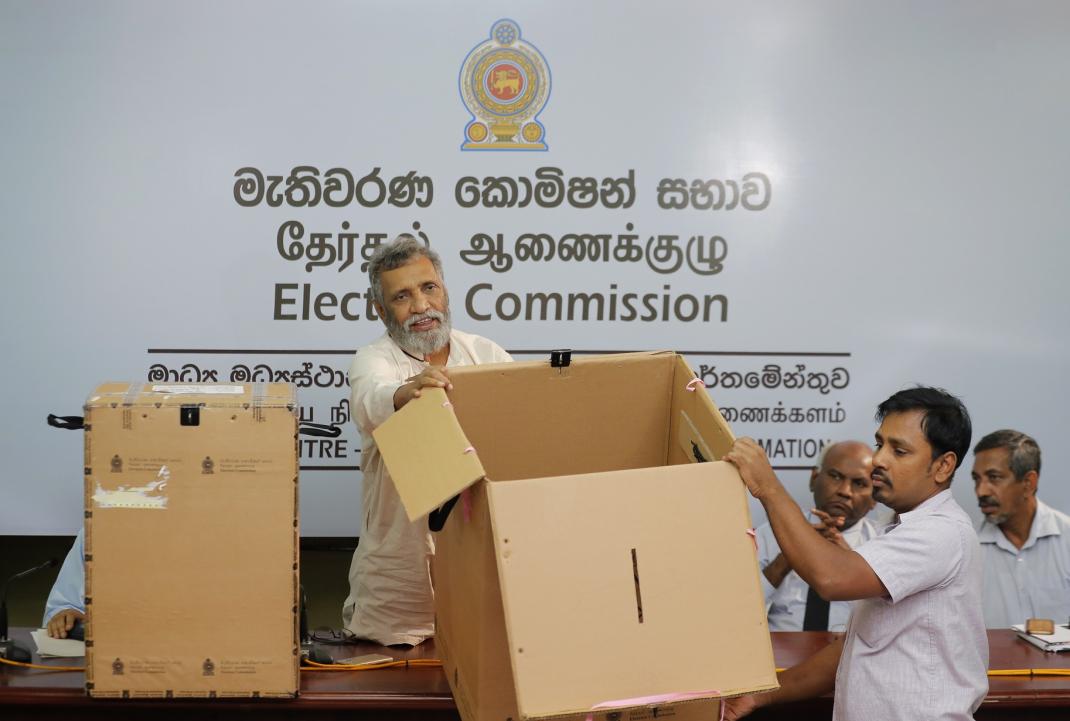 Image: Sri Lanka’s elections chief Mahinda Deshapriya displays ballot boxes that will be used in the upcoming presidential election in Colombo, Sri Lanka on Thursday, October 31, 2019. The voting is scheduled to be held on November 16.  © 2019 AP Photo/Eranga Jayawardena.

(New York) – The winner of Sri Lanka’s presidential election on November 16, 2019 will face enormous challenges to deliver justice for past crimes and prevent future abuses, Human Rights Watch said today. Since Sri Lanka’s civil war ended in 2009, there has been progress on the right to free expression, but no accountability for war crimes and other abuses committed by both sides.

Sri Lanka’s next president needs to make real progress on the 25 human rights commitments, including accountability for war crimes, made in a 2015 consensus resolution of the United Nations Human Rights Council. In March, Sri Lanka again joined a unanimous council resolution renewing its 2015 commitments. The resolution encourages the government of Sri Lanka to develop a “time-bound implementation strategy” for delivering on its commitments in full.

“Sri Lanka’s presidential election is certain to have important implications for human rights in the country, including justice for wartime violations,” said Meenakshi Ganguly, South Asia director. “Whoever is elected president will be under domestic and international scrutiny to ensure that Sri Lanka meets its human rights obligations.”

The Sri Lankan government has had a mixed record in carrying out the council resolution. Both an Office on Missing Persons and an Office for Reparations have been established, although neither is fully functioning. While serious concerns persist, there has been some progress on returning land occupied by the military during the conflict to its owners,.

However, the government has not kept its pledge to replace the Prevention of Terrorism Act, which has long been linked to indefinite arbitrary detention and torture. New concerns have arisen over freedom of expression and peaceful assembly in predominantly Tamil areas in the north, as the UN special rapporteur Clément Nyaletsossi Voulé documented earlier this year. Following the terrible Easter Sunday bombings in April, violent mob attacks erupted against members of Sri Lanka’s Muslim minority and migrants. As with similar episodes in recent years, the authorities failed to protect minority group members from attacks or act against those responsible.

Most crucially, the government has made no progress in its commitment to create a transitional justice mechanism to promote “reconciliation, accountability and human rights” in the country. Opposition by politicians to prosecuting “war heroes” ignores the demands of citizens who have spent a decade holding vigils, seeking the whereabouts of missing loved ones, and calling for those responsible for abuses to be brought to justice.

In March, the UN high commissioner for human rights, Michelle Bachelet, told the Human Rights Council that in Sri Lanka: “there has been minimal progress on accountability. Continuing impunity risks fuelling communal or interethnic violence, and instability. Resolving these cases, and bringing the perpetrators of past crimes to justice, is necessary to restore the confidence of victims from all communities.”

“Sri Lanka’s next government will have its work cut out to meet the country’s human rights obligations,” Ganguly said. “No Sri Lankan should again have to live in fear of torture, enforced disappearance, or extrajudicial killings.”