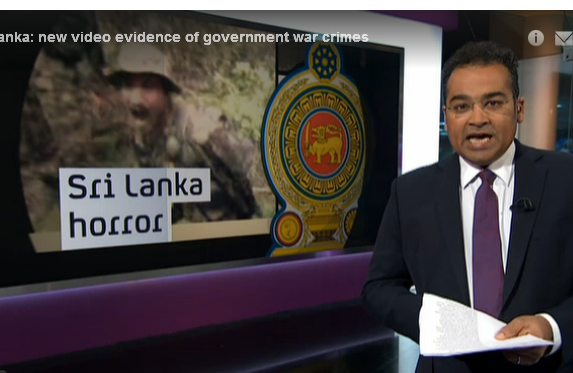 There has been no shortage of distressing images emerging from the final two or three years of Sri Lanka’s awful civil war. But this footage is amongst the worst I have seen, writes Callum Macrae.
Not because of the scale of the deaths it depicts – five deaths is a small incident in a war which saw upwards of 40,000 civilians massacred in the last few months alone, mostly by government shelling.
This footage is awful because of the behaviour of the soldiers towards the bodies of the female Tiger fighters, and because of the underlying culture of systematic brutality and sexual violence which it seems to illustrate.
We don’t know exactly when it was filmed – but it was at some point in the last two or three years of the war. It was filmed by a soldier on a mobile phone and its shows Sinhala-speaking soldiers – their uniforms suggest they may be special forces – who are laughing and cheering, as they celebrate the deaths of the Tiger fighters and perform acts of grotesque sexual violation on the bodies.
We also don’t know exactly what happened or how these people – who appear to be fighters, though they are not wearing combat fatigues – came to die.

‘No evidence of fabrication”

The images were examined by the leading forensic pathologist Dr Richard Shepherd. He concluded that the injuries shown are genuine and that this footage was not faked, but he also expressed surprise that the bodies showed few signs of the kind of battlefield injuries you might expect if this was the aftermath of a battle or ambush.
What he could see was evidence – in two cases at least – of serious head injuries, which appeared to have been caused by high velocity gunshots. This led him conclude: “The pattern of injuries overall is such that I can’t exclude the possibility of executions.”
The video – which has been supplied to us by a Tamil Group, the British Tamil Forum – has also been independently authenticated by a respected digital image analyst who often works for the British courts.
After an extensive frame-by-frame examination and analysis of the footage he concluded: “I found no evidence of fabrication or manipulation and I have formed the opinion that the video file is authentic insofar as it appears to be an accurate representation of the events depicted.”

But what is clearest of all in the footage is the climate of sexual violence. The bodies of the women – but not the men – have been stripped and are subjected to repeated sexual abuse. And what makes this of particular concern is that this is not an isolated incident.
The evidence of the apparently systematic execution and sexual violation of prisoners was first revealed on Channel 4 News over four years ago – and has continued to emerge.
The Sri Lankan government has responded by claiming the footage is, variously, doctored, manipulated or acted by Tamil Tigers dressed as government soldiers and speaking Sinhala, the language of the vast majority of government soldiers.
There is no doubt that the Tigers too were guilty of terrible war crimes – including the use of child soldiers and suicide bombings of civilian targets – but that cannot be used by the Sri Lankan government to justify its own actions.
When we revealed images of the Tamil Tiger television presenter Isaipriya, stripped and apparently executed, the government insisted she had been caught in crossfire.
But then three months ago, we obtained new footage which showed the moment of her capture by armed forces. She is unarmed and disorientated – but alive and unhurt. Isiapriya did not die in crossfire, she died in the custody of government forces.
And it is in that context that we must view the latest evidence. A pattern of systematic use of violence and executions. A pattern which – in an army as disciplined and effective as the Sri Lankan one – suggests that command responsibility for these actions can be traced to the very top.
And in Sri Lanka that means it goes to the Defence Secretary Gotabaya Rajapaksa and to his brother the overall commander of the armed forces, President Mahinda Rajapaka.

Issues for Sri Lanka, the UN, and David Cameron

This new evidence could not have emerged at a worse time for the Rajapaksa regime. The United Nations Human Rights Council is meeting this month in Geneva where it is considering calls for the establishment of an international commission of inquiry into all the crimes committed during the final stages of this awful war.
Until now the council has resisted calls to set up some kind of international inquiry – preferring to repeat calls on the government to mount its own investigation and take serious steps towards reconciliation and the addressing of political grievances.
But the Rajapaksa regime has responded with endless delays – accompanied by increasing repression of the Tamils in the north and east – and a continuing clamp down on any other dissent elsewhere in the country.
But human rights activists and Tamil organisations had high hopes that after three years of discussions – and following a recommendation from the High Commissioner for Human Rights, Navi Pillay – the council would finally vote this month for the creation of a genuine independent international commission of inquiry.
Hopes were raised still further when David Cameron made a clear commitment during the Commonwealth Heads of Government meeting last November. He said then: “Let me be very clear, if that investigation is not completed by March then I will use our position on the UN human rights council to work with the UN human rights commissioner and call for a full credible and independent international inquiry.”
But then the draft text of a resolution – apparently agreed by the British amongst others, and to be discussed by the HRC at the end of this month – was leaked last week.
To the surprise of many observers, and despite David Cameron’s deadline, the resolution does not call – in so many words – for the setting up of an international Commission of Inquiry from this meeting of the UN Human Rights Council.
It repeats the call made in various forms at HRC meetings over the past two years on Sri Lanka to conduct its own adequate inquiry. But the sting in the tail is that if passed, it does mandate the Human Rights Commissioner, currently Navi Pillay, to “assess progress toward accountability and reconciliation” and specifically “to investigate alleged violations and abuses of human rights and related crimes by both parties in Sri Lanka.”
That critical line will be interpreted in various ways by various interests. It will not be welcomed by the government in Sri Lanka which will certainly perceive it as a gross intrusion on their national sovereignty and the kind of “country-specific” resolution which represents an abuse of process at the UNHRC.
Supporters of the resolution – including the US and the UK – will argue it represents slow but significant progress. Specifically they will say that the mandate given to Pillay’s office does indeed constitute a form of international inquiry.
But many human rights activists and Tamil organisations will see it as a disappointing climb-down from the credible international mechanism or Commission of Inquiry which they felt was promised by Navi Pillay’s report and echoed in David Cameron’s pledge last November. To them it will seem that Sri Lanka is in effect being given yet another year to string the international community along.

The Sri Lanka High Commission has issued the following response to the latest video evidence:

It really is the most remarkable response to a request for a comment that I have experienced in thirty years as a journalist and film-maker. But I’m afraid it does rather illustrate the mind-set of the Sri Lankan regime of President Rajapaksa.