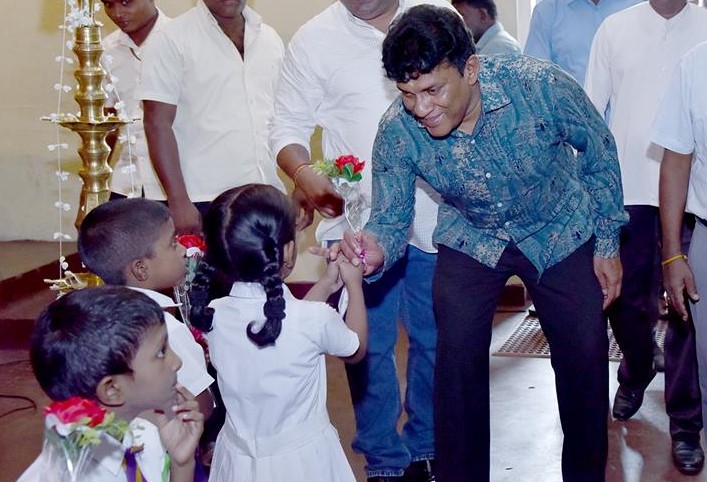 Look at the UNHRC sessions, today. We will be given a two-year conditional time period. I already said in my tweet early this week. It is “WAY-FORWARD breaking roadblocks targeting four Goals; 1)#New Constitution 2)#Reparations 3)#Truth-Seeking 4)#Democratisation.”

The [UNHRC] session is going on now. We have asked for the two-year time frame. It is going to be conditional with a time table. My ministry has two mandates. I am going to set both national coexistence dialogue campaign and official language policy implementation in parallel with the UNHRC time frame. My time line will be in line with UNHRC resolutions. Let us see how it’s going to come. Language policy implementations shall be the prelude to the political solution. Coexistence dialogue campaign shall bring the Sri Lankan identity with the committed consideration for the diverse nature of the nation.

It is going to be a time table. Within which we have to produce a new constitution. That will need a referendum. Besides, why should we do something behind the backs of the people, especially the Sinhala people? Let them study and decide. National question is the top priority for us, the Tamil, Muslim parties, progressive national parties and the international community. We supported and helped to establish the national government for this noble endeavour. It is not established for the sole purposes of some politicians to get ministerial portfolios and perks. We have seen both major parties playing politics by the national ethnic question since the 1950s. Hence we established the national government today with both UNP and SLFP. It should be understood very firmly by all parties. Those who reject the referendum are undermining the noble motive behind the establishment of national government.

I don’t know if TNA still sticks to Federalism. Unitary and Federalism are terminologies. We had a 30 year old bloody war practically over these terminologies. The world considered us as sick jokers. The terminologies do not matter. Nobody is meddling with the sovereignty. It is a debateless subject. Both TNA and TPA who represent the total Tamil populace in this country are for one single Sri Lanka. So, let us not make issues out of nothing.

My proposal is this. Let us finish the new constitution by May. Go for a referendum. All those forces rallied together in January 2015 will be together again. We can defeat the JO or anybody who oppose the new constitution. People who are more intelligent and patriotic than some politicians will support us. I trust we can obtain more than 6.2million what we received in 2015 on this one straight issue of the Constitution. Upon our victory it will be the end of the JO. Let any election, LG or PC come later after this.

SLMC, TPA, ACMC, EPDP who collectively represent 19 MPs in Parliament have jointly submitted proposals to the Steering Committee of the Constitutional Assembly. On the Executive Presidency subject, we have proposed for the continuation of the Presidency that is elected directly by the people. The executive powers shall be brought to the minimum where the President elected directly by the people at Presidential elections shall only hold the defence portfolio. It is one of our major proposals amid others. We have taken this position in view of the unscrupulous demands of both the UNP and the SLFP at the electoral reforms subject. They claim that abolishment of the Presidency will weaken the stability of the country. Hence, demand additional bonus seats in Parliament as stability bonuses at the cost of minor parties. Therefore, we, of the minor parties have now decided to keep both the Presidency and our Parliamentary stakes intact. Those who campaign for the abolishment of the Presidency shall understand the plights of the minor parties.

(Excerpts from a interview given to the Nation by Minister Mano Ganeshan.)