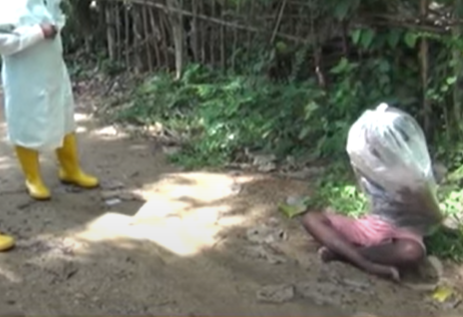 Image: Recently the public was shocked to see a man being caught by villagers, swathed in polythene.

The COVID-19 pandemic has created new challenges for everyone but perhaps nowhere has that been more marked than in the engagement between the State and the public. Faced with increasing financial, social and mobility issues, the public, particularly low income people, are surviving this year in the midst of monumental hardship. Therefore it is incredibly unfair for Police Spokesman DIG Ajith Rohana to say anyone avoiding PCR tests will be taken into custody and possibly jailed for being a “traitor”.

For too long anything or anyone who does not toe the line in Sri Lanka has been censured as “unpatriotic”. Often this word is applied without context considering the multidimensional facets of issues faced by an individual, group or even race. But when such broad brush strokes are applied to everyday people who are doing their best to get by and survive the unprecedented hardships of a global pandemic, it is incredibly unfair that they are then branded as “traitors” into the bargain.

Recently the public were shocked to see a man being caught by villagers, swathed in polythene and handed over to Police for reportedly moving out of an isolated area. This was followed just days later by the Government deploying drones to keep people hemmed into isolated areas with even a helicopter doing the rounds at one point.

This sort of fear-mongering, championed by the State no less, creates an environment of crippling fear, which is often worsened by misinformation and disinformation. It is unconscionable that a senior public servant feels such callous statements are justified.

Already an entire community in Sri Lanka has been vilified and deprived of the right to lay their deceased to rest in line with their religious and cultural beliefs. These decisions were taken with no scientific basis and little transparency and their impact will resonate for years longer than the pandemic.

COVID-19 has already robbed humans of too much and the next casualty should not be compassion and care. It is true that the process of test and trace is integral to controlling the spread of the virus but it should be done within the safeguards and rights provided by the Constitution. Moreover the Government and Police have to be sensitive to the different issues that people may encounter.

Many fear the stigma of the virus, concern for the welfare of their loved ones, their standing in the community, ability to afford the test or how to deal with being sent into quarantine when they may have insufficient funds. Parents could be worried about the stigma attached to their children or a multitude of other things that cannot be fathomed unless approached with compassion.

Tarring them as “traitors” and throwing them in already overcrowded jails is certainly no solution at all. Concerns over COVID-19 spreading to congested prisons was brought to the attention of the Government and Attorney General as early as April by civil society and other stakeholders. Unfortunately even six months later the proposed solutions were barely implemented.

The Government has to acknowledge there have been shortcomings on their part as well, whether it was Navy and Police clusters emerging, failing to scale up adequate PRC testing, exorbitant costs in the returnees quarantine process or a serious Police riot. The condemning of citizens for avoiding PCR tests will not help this situation at all and will instead make an already difficult situation, terrible. DIG Rohana would do well to ask himself whether he is a true patriot.