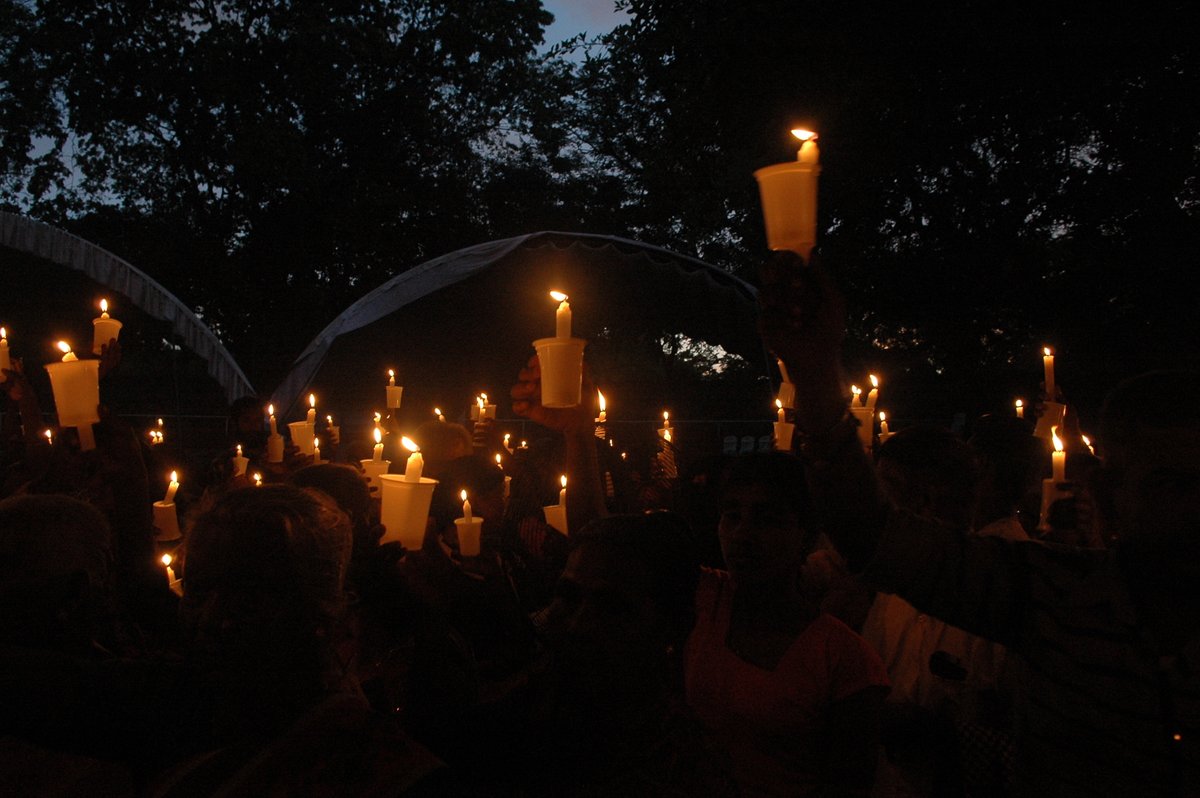 Issuing a press release to mark the  International Day of the Victims of Enforced Disappearances the  Sri Lanka Monitoring Accountability Panel (MAP) says that “in light of the GSL’s lack of progress to date, the MAP will soon release a thematic report addressing alternative avenues for redress and accountability for the mass crimes committed during and after Sri Lanka’s armed conflict.”

The press release in full follows:

The 30th of August marks the International Day of the Victims of Enforced Disappearances. This day has a particular resonance for the Sri Lankan Tamil community whose members have been subjected to decades of abductions, secret prisons, and disappearances at the hands of the Sri Lankan Army and security services. As noted previously by the UN Office of the High Commissioner for Human Rights the ‘scale of enforced disappearances in Sri Lanka has long been exceptional’. Historically, disappearances have been used ‘to target those perceived as critical of the Government [of Sri Lanka (GSL)], supportive of opposition movements, or involved in armed conflict’ and have been largely perpetrated by GSL security forces ‘in collusion with paramilitary groups’. The victims of enforced disappearance are not only the disappeared themselves, but also their family members. Today, no doubt, many thousands of Sri Lankans will be reflecting on this and other aspects of the country’s unfortunate history.

This press release comes in advance of the Thirty-Sixth Session of the UN Human Rights Council (HRC) to be held in Geneva from 11–29 September 2017. The MAP urges all stakeholders to work towards the meaningful implementation of the HRC’s Resolution of October 2015 on ‘Promoting reconciliation, accountability, and human rights in Sri Lanka’ (Resolution 30/1), including a functioning Office of Missing Persons and a law criminalizing enforced disappearances.

In July 2017, the Transitional Government of Tamil Eelam extended the mandate of the Sri Lanka Monitoring Accountability Panel (MAP) for a further two years. The recomposed panel of three international legal experts will continue to provide independent monitoring of the transitional justice mechanisms in Sri Lanka, including the judicial measures to investigate and prosecute war crimes, crimes against humanity, and genocide.

Despite co-sponsoring Resolution 30/1, the GSL has largely failed to establish the promised accountability mechanisms to address the crimes committed during the protracted civil war between the Government of Sri Lanka (the ‘GSL’) and the Liberation Tigers of Tamil Eelam, which ended in 2009 and left more than 40,000 dead and some 280,000 displaced. In particular, the GSL has capitulated to domestic political pressures and resisted the inclusion of foreign judges and prosecutors in a special criminal court.

In response to these failings, the UN High Commissioner for Human Rights encouraged Member States to ‘[w]herever possible, in particular under universal jurisdiction, investigate and prosecute those allegedly responsible for such violations as torture, enforced disappearance, war crimes and crimes against humanity’. The MAP has previously argued that, if the GSL continues in its current obstructionist vein, the UN Security Council should refer Sri Lanka to the International Criminal Court.

Since the release of the MAP’s Second Spot Report on 28 February 2017, the Human Rights Council has granted the GSL an additional two years in which to implement the processes envisaged in Resolution 30/1. Regrettably, the HRC did not impose any further demands on the GSL or set benchmarks for its compliance with the Resolution.

In the six months following this seemingly pro forma extension, there have been a number of notable developments, which illustrate the failures of the GSL’s transitional justice program:

• In April, Amnesty International issued a report focusing on the stories of victims’ relatives, many of them women, who have spent years searching for truth and justice: ‘Obstructed at every turn, they have been misled about the whereabouts or fate of their disappeared relatives, subjected to threats, smears and intimidation, and suffered the indignity of delayed trials and a stalled truth and justice processes.’

• In May, the GSL cabinet approved a third draft of the Counter Terrorism Act (CTA)—meant to replace the draconian and reviled Prevention of Terrorism Act (PTA) which remains in force to date—but no parliamentary vote has yet been set. According to Human Rights Watch, ‘Sri Lanka’s latest counterterrorism bill falls far short of the government’s pledges to the United Nations Human Rights Council to end abusive detention without charge’ and ‘would still permit many of the abuses occurring under [the PTA]’ while raising ‘a number of new concerns including broad and vague definitions of terrorist acts, warrantless arrests, and undue limitations on freedom of expression.

• In June, the GSL announced it would appoint a ministerial committee—chaired by Prime Minister Ranil Wickremesinghe—to coordinate the recommendations made in Resolution 30/1. However, the committee’s precise mandate and proposed plans have yet to be clarified.

• In July, the UN’s Special Rapporteur on human rights and counter-terrorism Ben Emmerson announced the preliminary findings of his recent mission to Sri Lanka. According to Mr Emmerson, ‘Sri Lanka continues to use torture against people detained on national security grounds, and its progress on human rights, reforms, and justice remain woefully slow.’ Additionally, ‘[a]ll the evidence points to the fact that the use of torture was “routine and endemic” against people held under the deeply-flawed [PTA]’. Unsurprisingly, the ‘Tamil community has borne the brunt of the State’s well-oiled torture apparatus, as the law is used disproportionately against them’. It was reported that ‘80% of suspects arrested under the anti-terror legislation in late 2016 had reported torture and other physical ill-treatment’. The Special Rapporteur will present a comprehensive report with his findings and recommendations to the UN Human Rights Council in March 2018.

• In July, President Sirisena officially signed the gazette on the Office of Missing Persons (OMP). While the spokesman for the UN Secretary General called the development a ‘significant milestone for all Sri Lankans still searching for the truth about missing loved ones’, the OMP has yet to become operational and the GSL’s intentions with respect to the office are dubious. A recent press report suggests that the OMP may be used to whitewash the past: ‘The government last week said the OMP will put to end the possibility of disappearances in the future and no one will be prosecuted for past action’. Moreover, Sri Lanka’s domestic political opposition factions have ‘slammed the move as a betrayal of the troops which crushed the LTTE’s three-decade-long separatist campaign’. Previously, the MAP has been critical of the OMP (as currently formulated) for: (1) failing to ensure the independence and impartiality of its membership and (2) potentially impeding any consequent efforts of a special court by way of overly protective confidentiality and immunity provisions.

• In July, the International Truth and Justice Project (ITJP) issued a report documenting 21 cases of abduction, illegal detention, torture, and/or sexual violence against Tamil victims by the Sri Lankan security forces in 2016 and 2017.

• In August, Sri Lanka’s army chief Mahesh Senanayake described the country’s military as a ‘highly disciplined’ force that did not commit ‘any offences’ during the civil war, noting that ‘[t]here can’t be murderers among war heroes’ and ‘[t]hose who fought the war will not be punished’. This standard political line, which has been adopted by many actors in the GSL and military, suggests that any national war crimes investigations may face interference from powerful forces.

• In August, Sri Lanka’s new foreign minister Tilak Marapana repeated the GSL’s consistent yet erroneous position that foreign judges could not be accommodated in domestic judicial mechanisms in accordance with the country’s constitution. As noted previously by the MAP, there is nothing in the constitution or any other Sri Lankan law that amounts to such a prohibition. Hybrid courts with international judicial assistance have functioned around the world in various legal environments that have been adapted for such specific purposes. There is simply no legal reason why Sri Lanka could not do the same.

In addition to recent developments, longstanding issues continue to fester. These include: the sustained militarization of Sri Lanka’s Tamil-dominant Northern and Eastern Provinces (including the occupation of civilian land); continued detention of political prisoners; a lack of security-sector and constitutional reform; and harassment of religious and ethnic minorities and human rights defenders.

As recently noted in a report issued by Amnesty International (Amnesty Report), one of the ‘important steps’ taken by the GSL since the adoption of Resolution 30/1 has been the ratification of the International Convention for the Protection of All Persons from Enforced Disappearance. However, the GSL’s commitments under the convention have yet to be fulfilled. A parliamentary debate on a bill criminalizing enforced disappearance scheduled for July 2017 was postponed without explanation. And, as noted, the success of the OMP remains an open question.

In light of the above, the MAP hereby calls on the GSL to adopt all of the recommendations contained in the Second Spot Report as well as those set out in the Amnesty Report. In particular, the GSL should:

• criminalize enforce disappearances as a matter of urgency;

• operationalize the OMP as soon as possible, ensure its independence, and consider amendments in light of the MAP’s previous criticisms;

• repeal the PTA, replace it with legislation that meets international standards, and provide immediate and meaningful judicial review of detention orders made pursuant to the old law;

• begin taking the preliminary practical steps necessary for the eventual establishment of a special court, including: amending substantive law to include international crimes and modes of liability, developing a system for the collection and preservation of evidence, enhancing witness protection systems, and establishing an outreach program regarding accountability mechanisms and issues.

In light of the GSL’s lack of progress to date, the MAP will soon release a thematic report addressing alternative avenues for redress and accountability for the mass crimes committed during and after Sri Lanka’s armed conflict.

(The MAP provides independent monitoring, advice, and recommendations, focusing on the effectiveness of accountability measures from a victims’ perspective. Its views and recommendations will enable victims and other stakeholders to participate more effectively in the transitional justice process and thus enhance the legitimacy of measures taken.