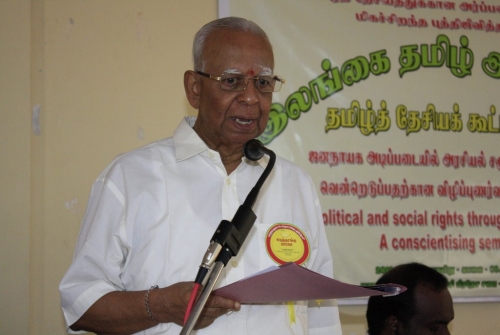 CHENNAI: Sri Lanka’s Tamil National Alliance (TNA) leader and senior MP R Sampanthan on Tuesday said the Indian government should seriously consider the opinion of the leaders in Tamil Nadu over the country’s participation in the Commonwealth Heads of Government Meeting (CHOGM) scheduled to be held in his country in November.

Many parties, including the AIADMK and the DMK, and students’ organizations in the state have been urging the Centre to boycott CHOGM.

Sampanthan was speaking to reporters at BJP’s Tamil Nadu headquarters after an interaction with party leaders, including state president Pon Radhakrishnan, national secretary Ila Ganesan, state secretary Vanathi Srinivasan and others. Sampanthan said he sought the support of the BJP on the implementation of 13th amendment to Sri Lanka’s constitution.

The India-backed 13th amendment to the Sri Lankan constitution was carried out to ensure autonomy to the country’s provinces.

Sampanthan alleged that the India-sponsored rehabilitation projects had not been properly implemented in Sri Lanka. “India’s intervention is very much needed for a permanent solution to the Sri Lankan Tamil issue. India should help for resettlement of Tamils,” he said.

Asked about the divided opinion of the TNA leaders on India’s participation at CHOGM, Sampanthan said they might be thinking that the participation of the leaders from India would help the cause of the Tamils. “But I don’t consider that it is the wide opinion,” he added. It might be recalled that in an exclusive interview to TOI a few days before his election as Northern Provincial Council chief minister, C V Wigneswaran said: “We must have the courage of conviction to tell the Sri Lankan government that it has done this and this and what does it got to say… It is better you say it at the CHOGM rather than keep away.”

Sampanthan requested the leaders in Tamil Nadu to work together to help the Sri Lankan Tamils. He said Wigneswaran and other TNA leaders would meet the leaders of various parties, especially those in Tamil Nadu, to get their support.