Sri Lanka may pull its mission out of Tamil Nadu 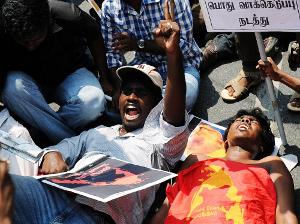 COLOMBO: Faced with growing anti-Sri Lankan sentiments in Tamil Nadu, Colombo may shift its deputy high commission office out of Chennai, a media report said today.
The new location could be Trivandrum in neighbouring Kerala, the Sunday Times said.
Threats and intimidation of Sri Lankan nationals and Sri Lankan property have been noted in Chennai.
The paper claimed that even the Sri Lankan defence attache based in Chennai had come under harassment.

The protests came as India voted against Sri Lanka alongside the US in a key UN human rights resolution, last week, that called for an independent and credible investigation into allegations of human rights violations towards the end of the island’s three-decade civil war against Tamil separatists in 2009.