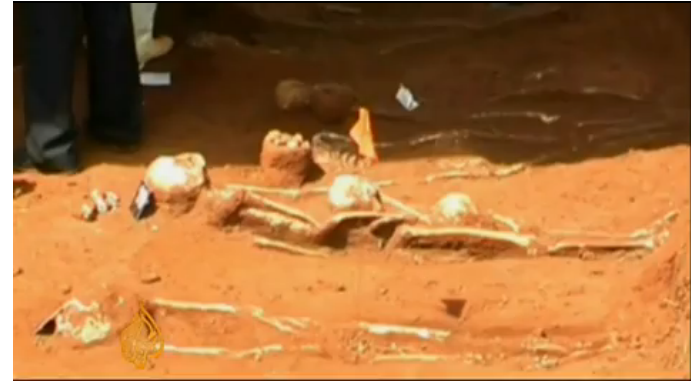 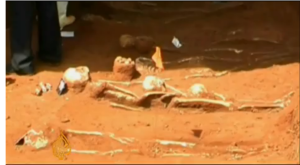 Human remains in central Matale district is “the scene of a crime”, a forensic medical officer has told Al Jazeera.
The remains of more than 150 people have been excavated in the town of Matale in central Sri Lanka.
The skeletal remains were discovered late last year by workers building a facility at a hospital in Matale.
Dr Ajith Jayasena, Matale hospital’s judicial medical officer in charge of the investigation, told Al Jazeera that the site “is a crime scene”.

Bone samples will be sent abroad to find out when they died and soil analysis of the area is also being done, investigators said.

“This is only one mass grave, I’m sure there are many, many mass graves in Sri Lanka,” he said.

There are allegations that the bodies are those of victims of a small pox outbreak from a hundred years ago, while19/02/2013

There are allegations that the bodies are those of victims of a small pox outbreak from a hundred years ago, while others believe they may be those killed by a flood some years ago.

But other theories hold that the people died in political contexts. The Matale area was an epicentre of a late 1980s uprising by leftist Sinhalese group, the JVP, in which the state matched the guerrillas’ extreme violence.

The group says this site could potentially be where some of its members may have been buried.

Jayasena told Al Jazeera that no real conclusions could be drawn until a detailed analysis of the skeletal remains is carried out.

“The real story behind the dozens of people found buried here can only be known with more comprehensive investigations,” he said.

He added that “evidence of decapitation, dismemberment and concealment” indicates that “crimes were committed”.

“There were bundles and bundles of skeletal remains. Another thing is the direction of the bodies and certain injuries, that I have informed (the) court about, so it is unlikely to be a routine burial site.”