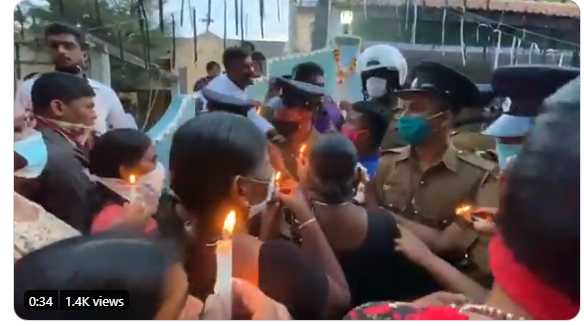 The general elections of 2020, conducted in the midst of the ongoing crisis of COVID-19 and a global economic recession imminent, marks yet another turning point in our political history. Two issues under girded the campaign; nation building ideological platforms and economic considerations in the name of progress, development and welfare of the people. It is a bare eleven years after the war and just a year after the calamitous Easter Sunday Bombings. The question of who belongs and who does not belong to the nation, the discourse of us and them very much alive, shaping politics.

The SLPP had a resounding victory in the polls, and along with its few allies, some of them newly minted, is able to command an overwhelming majority in the parliament and in steering the country’s policies for the next five years. It won on a plank of strong government, development, prosperity and (Political) Buddhism. The election outcome and trends promoted by the current government privileges militarisation, not just the deployment of the military in certain areas, but the militarisation of civilian rule. A 20th amendment to the constitution seems imminent. This will render the gains of the 19th amendment null and void; one of the few achievements of the good governance rule that brought about a reduction of the powers of the Executive President.

The question of land is entangled in multiple political and economic priorities. Land has been at the centre of the devolution debate. Military occupation of land in the north and east was a bone of terrible contention in the years following the war and is feared by many in these parts. It is said that 80% of the land in Sri Lanka is state owned. This means that the state holds this land in trust for the people, and in no event should any government be allowed to abuse that trust and ride rough shod over the welfare of the people. Land alienation in the name of economic progress, namely turning land over to companies for economic purposes, is a matter of grave concern. Contracts like MCC should not be passed without widespread discussion. No government should be allowed to rush these measures through which will dispossess this country’s people of their claim to land.

Land is also an ideological factor. We are concerned that issues like heritage which have real historical value could be used at times to deny people access to land, for their livelihood and for habitation. The task force on heritage in the east is composed overwhelmingly of the Military and Clergy; this has raised the fears of Muslims and Tamils who are a dominant presence in the east. Their aspirations and even survival seem threatened by these new measures surrounding heritage. All land related programmes, including settlement and re-settlement, need to be done in consultation with the people concerned. The environment is a cardinal feature of our future. An environmental discourse should be composite and bring people into its articulation. Environmental concerns cannot be undermined for grand economic programmes, nor should they be used as political ploys in devaluing people’s livelihood attempts and survival.

COVID-19 places a great strain on an already fragile Sri Lankan economy, which had been kept bolstered only through foreign loans and a precarious export economy. COVID-19 has merely precipitated the crisis. Setting up factories, creating and training a labour force for export or local industries in ever increasing precarity, characterised recent economic programmes. What is the future of this now? The dispossession of large numbers of working women in West Asia is going to create untold hardship to those dispossessed.

The state plays a pivotal role in packaging a liberalising economic agenda, in which workers and cultivators of small holdings or landless peasants would be further disenfranchised. Post COVID-19 austerity measures straitjacket us into accepting neo-liberal packages that erode into workers’ rights and welfare, people’s claim to land for cultivation and habitation. Privatisation has eroded into areas that were under the state’s purview previously, and we fear that this process will be accelerated in the coming years. We must safeguard the cherished welfare measures that we have long fought for, like health care and education.

Long standing concerns of the plantation community which is also largely a Tamil minority community has not been addressed and they have been a pawn in the shenanigans of short term political manoeuvre. Low salaries and housing are primary concerns; protection of workers in large and small holdings, work security, access to good schooling facilities are some of the other issues. Women’s economic survival, safety and mobility form the backbone of stability. They are at the helm of the export economy and have sustained communities through decades of hardship. We are concerned about the overall disenfranchisement of working women.

Suppression of dissent has been with us for long and during the war and in the post war years have led to a serious suppression of dissent. We are concerned about arbitrary arrests of journalists, lawyers, activists and working people on flimsy pretexts, as well as police personnel who had not toed the line, for instance, the arrest of Shani Abeysekara. Activists and professionals Ramzy Razeek and Hejaz Hisbullah are still in detention for reasons which are not clear. At a time when the Muslim community is under assault, these suppression of persons in the community instills fear among minorities.

It is our call that those who value the co-existence of all communities, make a pledge to talk across lines of disempowerment, allow the fault lines of class, gender, ethnicity, sexual minorities and disabilities to find expression; and preserve and develop our democratic institutions, nurture pluralism, keep alive a culture of discussion and dissent.