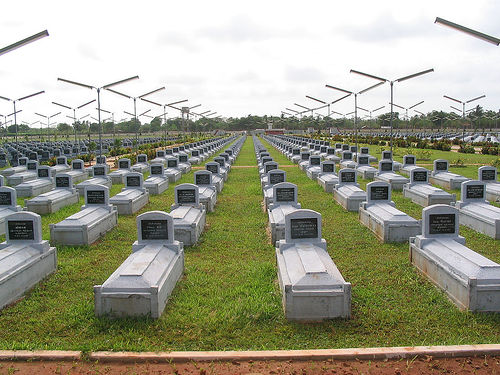 The Sri Lankan State’s erasure of the complex history and experiences of the war manifest in varying ways across the country; military monuments that showcase a single victory narrative, the construction of Buddhist statues in Tamil-majority areas and the blatantly incorrect signboards at several of these locations. Then, there is the desecration of the Liberation Tigers of Tamil Eelam’s (LTTE) ‘maaveerar thuyilum illam’, which loosely translates to ‘great heroes’ resting places’.

Here lie bodies of LTTE cadres killed in combat. In the several cases where bodies could not be recovered, memorial headstones are erected. The people who remember them in their original state are quick to say that they were graveyards as much as they were gardens, or even temples, meticulously designed and maintained by the LTTE and their families. Now, some of them are cement fragments piled in the centre of a vast field, while others now form the foundation of a few of the many army camps that cover the peninsula.

On November 27, the thuyilum illams across the Northern and Eastern provinces would become the sites of community mourning and celebration of ‘Maaveerar Naal’, the LTTE’s ‘Great Heroes Day’ celebration. Held on the anniversary of the death of Shankar, considered to be the first ‘maaveerar’, a symbolic lamp is lit and the LTTE flag raised at 6.05pm, allegedly his precise time of death. It was the day Velupillai Prabhakaran, leader of the LTTE, would make his annual speech. These observances are said to provide the community with the feeling that by sacrificing their lives, the dead cadres would grasp eternity.

Commemorations are no longer carried out at the scale they were during the conflict, however they remain problematic due to the explicit promotion of the flag and symbols of a proscribed organisation. There are also questions around the heroic remembrance of those who, by giving their lives to their cause, orchestrated the death of civilians. This is so in the case of the Black Tigers, who dedicated themselves to specialised suicide missions at specific targets, many of which were civilian spaces. Survivors and families of victims of the LTTE’s atrocities, including Tamils, question why the cadres should be remembered and celebrated as heroes in public collectively, in events that often have a political dimension. However, those interviewed in this piece say the former cadres’ families only want the right to remember and grieve.

Efforts in 2017 to remember those who perished in Mullivaikkal in May 2009 were restricted, because the police thought that those being mourned were LTTE cadres. The two are distinctly separate; Mullivaikkal commemorations in May are regarded as remembrance of all those who perished in the war, but a larger focus is on civilians. Similarly, journalists have written that it is ‘a grave blunder to assume that the ‘Maaveerar Naal’ of the LTTE is a day of national mourning for the Tamils of Sri Lanka.’

Though many in the North and East had family members who joined the LTTE and many Tamils are sympathetic towards the LTTE even today, not all Tamils have connections to the LTTE. There are those who have suffered under the LTTE; surviving assassination attempts, forcibly recruited, recruited as children, shot at when attempting to flee LTTE-controlled areas in May 2009, and more. These survivors, as well as families of Tamils who fell victim to LTTE’s violence, do not regard the LTTE as their representatives or as heroes.

There is also controversy as to why the JVP, who also took up arms against the state, and engaged in abuses against civilians, are allowed to mourn their dead publicly in heroes remembrances (viru samaruma) when the thuyilum illams have been destroyed by successive governments. It is interesting too to note that the JVP and the LTTE were described differently during the JVP insurgencies – the English and Sinhala media often referring to the former as ‘subversives’ and the latter as terrorists.

The army would destroy the thuyilum illams in its path as it gained ground during the war, reducing the headstones and graves to rubble and in a few instances, we were told had even dug bodies out of the ground.

The State’s efforts to clamp down on post-war memorialisation meant that families of the fallen cadres had no opportunity to mark Maaveerar Naal. But there were also restorations and reconstructions as the LTTE gained access to and varying degrees of control of areas the Army had earlier captured. For example, in Kopay, in the Jaffna district the thuyilum illamwas destroyed once the Army gained control of the area in 1995. But after the ceasefire of 2002, the LTTE regained access, rebuilt and memorials began again. They even had placed a plaque at the entrance, with remnants of the destruction. As the ceasefire collapsed, the Army again destroyed it and built a camp over it, which still stands. Around 2012, some Tamils in the North and East defied government’s crackdowns and organized remembrance events, but these were not held in thuyilum illam sites. In 2012, when Maaveerar Naal fell on the same day as Karthiaai Vilakeeduu, the Hindu festival of lights, residents lighting lamps at the University of Jaffna came under attack from the security forces.

From 2016, families and communities, supported by some Tamil politicians, clergy and diaspora, started to publicly but mutedly markMaaveerar Naal. Some did this by arranging remaining fragments of headstones, clearing the overgrown fields, and restoring some order to what had been destroyed. Surveillance and the presence of intelligence personnel was recorded in many locations, and some thereby resorted to a single lamp lit near where the resting place used to be.

The Right to Remember and Mourn

The right of all communities, and families, to remember their dead who were lost in combat is laid out in international humanitarian law. Government-appointed bodies such as the LLRC and the Office on Missing Persons have also made recommendations on remembrance and memorialisation in general while the Consultation Task Force on Reconciliation mechanisms (CTF) has explicit reference to remembrance of dead LTTE cadres. One submission, quoted in the report, said ‘20 LTTE graveyards from across the North and East of Sri Lanka, comprising thousands of graves and commemorative plaques for LTTE fighters were bulldozed after the war’ and acknowledged that “the destruction of LTTE cemeteries, the grief it had caused and the need to preserve the sanctity of the dead’ was raised frequently during its hearings. The CTF then recommended the restoration of burial plots to family members and the removal of all buildings subsequently erected on them. The CTF also made a general recommendation noting that the ‘sanctity of all sites, where those who perished or disappeared in armed conflicts are buried, interred or symbolically remembered is respected.’

A possible reason for the destruction of the thuyilum illams could be that the military who carried out these acts were motivated by a wish to ‘deny the defeated LTTE any focal points for resurgence’ . These actions, however, only serve to deepen divide between the ‘conquering’ and the ‘conquered’, hindering possibilities of understanding and reconciliation between groups.

As Sri Lanka nears ten years since the end of the conflict, many of the initiatives intended to address wartime abuses and post-war issues are yet to come to fruition. The families of the disappeared still wait for answers, and some have been engaged in protests for around 600 days at the time of writing. Land release is slow, and militarisation in the North and East remains an ever-present issue. These issues are compounded by the denial of their right to mourn their loved ones. The desecration of the thuyilam illam, in this light, acts not as a deterrent but as a ‘focal point for enhanced embitterment towards the government’.

Note: For a map of 14 locations, photos, description of each site with history, statistics, quotes from local people including family members of Maarveerar, see the full story at https://cpasl.atavist.com/nopeaceinrest