Sri Lanka looks forward to continuing its constructive engagement with the HRC, the High Commissioner and the OHCHR 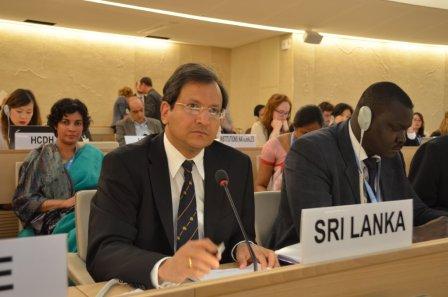 ” With regard to the immediate concern’ for the protection of human rights defenders, journalists and communities she met in Sri Lanka referred to by the High Commissioner, we wish to note that Sri Lanka has a vibrant civil society. ”
Statement by H.E. Mr. Ravinatha P. Aryasinha Ambassador at 24th session of UNHRC
Mr. President,
At the outset, Sri Lanka wishes to associate itself with the statement made by the Islamic Republic of Iran on behalf of the Non-Aligned Movement.
My delegation takes note of the High Commissioner’s opening statement. Sri Lanka is firmly committed to supporting the High Commissioner in the discharge of her mandate as contained in GA Resolution 48/141. Consistent with Sri Lanka’s policy of continuous engagement with the Council, I avail myself of this opportunity to update the Council on the progress made since the Council last met in June 2013, in protecting human rights and the furthering of the reconciliation process in Sri Lanka.

In July 2013 the Government accepted an additional 53 recommendations of the LLRC to be implemented via the National Plan of Action (NPoA).

These new recommendations include issues related to international humanitarian law, human rights, treatment of detainees, vulnerable groups, disabled persons, IDPs, concerns relating to the Muslim community in the North and the East, return and resettlement, restitution / compensatory relief, reconciliation, and the language policy.

In line with the recommendations of the LLRC, the new Ministry of Law and Order was created in August 2013, under which the Police Department is now placed.
The Commissioner General of Land has initiated a new programme to resolve land issues of people resettling in the Northern and Eastern provinces in the two-year period 2013 – 2014. A new Land Circular has been issued on 31 January 2013 to facilitate the work of those people wishing to lodge complaints regarding their land.

The Commissioner General envisages resolving land issues during the two-year period. Basic information is gathered in selected Divisional Secretariats in the North to ensure land ownership. This procedure is implemented under the Land Title and Registration Act. Under this scheme 85,166 applications have been received so far, and a database is under formulation. Steps are also underway to prepare a Land Use Plan for every district in the Northern and the Eastern Provinces to administer the process of land conservation and exclusion at district level. Advisory Committees are being set up at district level to prepare land use policies as per the recommendation of the LLRC. Eight such district Advisory Committees have been appointed so far.

The Government has also initiated a programme to pay compensation to residents of the Northern Province affected by the conflict, as per the recommendation of the LLRC.

The Government has allocated Rs 85 million for this purpose utilizing funds allocated for 2013 as recommended by the LLRC.

As at August 2013, approximately 99% of the areas identified for demining have been cleared and less than 89 square kilometres remain to be demined, out of 2,064 square kilometres left contaminated with landmines and UXOs at the conclusion of the conflict.

Demining continues to be undertaken in a few areas where the number of mines and IEDs laid by the LTTE were extensive.
Since the end of the conflict, as at 09 Sep 2013, 12,220 ex-LTTE combatants have surrendered to the Government for safety.

Up to date, over 11,758 have been rehabilitated and reintegrated into society. Only 234 are currently undergoing rehabilitation and 91 remain under legal proceedings.

The Government has spent Rs. 109.79 Million in 2012 and Rs. 69.29 Million up to June 2013, for the rehabilitation of ex-combatants. From 2009 to June 2013, the Government has expended a total of Rs. 1,291.85 Million on the rehabilitation of ex-combatants.
The presence of the military in the former conflict affected areas has been reduced gradually since the end of the conflict and those remaining in these regions are located for strategic security reasons.

The full responsibility for law and order has been handed over to the Police with the establishment of more police stations (16 new stations and 3 new posts) and the recruitment of more Tamil speaking Police personnel (1447) to serve in these areas.
Meanwhile, the former High Security Zones (HSZs) have ceased to exist.

The Palaly cantonment is now the only area on ground in which some security restrictions remain. But even within the cantonment, civilians have free access to the airport and the KKS harbour. The extent of the previous HSZ was 4098.36 hectares in the Jaffna peninsula, of which 2128.0722 hectares (52%) have been released. On either side of the Palaly airfield, more than 1,000 acres of land have also been returned to their owners this year. In August 2013, 136 houses were returned in the Jaffna area.

The Government in August 2013 appointed a three-member Commission to Investigate Missing Persons related to the conflict.

This Commission has a wide mandate and is tasked with investigating cases of persons missing from the Northern and Eastern provinces from 1990 to 2009 period. The Commission will conduct hearings in all districts. Evidence can be provided in all 3 languages. The Commission has been authorized to conduct necessary inquiries and investigations and submit a report to the President within six months.
The Government continues to engage with the Working Group on Enforced or Involuntary Disappearances (WGEID) to clear outstanding cases. An inter-agency working group is working in Colombo to support the work of the WGEID. The Government is also working with the ICRC on the issue of missing persons.

The Ministry of Justice has formulated a draft amendment to the Penal Code to criminalize enforced disappearances, and also formulated draft amendments to the Criminal Procedure Code and the Human Rights Commission of Sri Lanka Act in order to give effect to recommendations in the National Plan of Action for the Protection and Promotion of Human Rights (NHRAP).

The 10-year National Plan for a Trilingual Sri Lanka was launched in 2012 under the implementation of the Trilingual Policy.

The Government is in the process of recruiting / training the civil service as well as the police to work in the Tamil language under this programme. Currently, there are 1,447 police officers who speak Tamil in the North. The Ministry of National Languages and Social Integration which is charged with the realization of human rights in terms of language devotes proportionately a larger share of its resources in the former conflict-affected areas. This Ministry is in the process of implementing the LLRC recommendations, the commitments in the National Action Plan for the Promotion and Protection of Human Rights as well as our UPR pledges in terms of language policy, and is ahead of schedule in their implementation.

The inquiry into the case of the killing of 5 students in Trincomalee commenced on 5 August 2013, and 12 STF Police personnel have been arrested and remanded in this connection. A special prosecutor has been assigned to lead the team of prosecutors in this case.

A team of officers from the Attorney General’s Department have reviewed material on the ACF case, including the records of the Commission of Inquiry as well as archived material.

The Attorney General has given directions to the Police for further investigating the case following which the possibility of prosecution will be considered if the perpetrators can be identified.
The Attorney General’s Department People’s Petitions Division entertains complaints from the general public. The public can petition any grievance they have with government departments or in relation to public officers. The Attorney General will use his office to intervene and try to give administrative relief whenever possible. The draft Victim and Witness Protection Bill is being re-presented to the Cabinet following amendments to the text.

The Government is committed to enhancing the capacity of the National Human Rights Commission of Sri Lanka, and in this regard welcomes the support for capacity enhancement provided by the Commonwealth Secretariat.

In the field of education, all schools damaged during the conflict have been repaired and rehabilitated. At present, one thousand and twenty (1,020) schools are functioning in the Jaffna district with a student population of 260,582, and a teacher-strength of 13,967.
Mr. President,
For the reconciliation process to be viable and sustainable, it is also important to secure the economic contentment of the people coming out of a conflict situation. With a view to meeting this objective, since the end of the conflict, a significant portion of state resources have been channelled to the North and the East. The total investment by the Government for development projects in the Northern Province during the 2006 to 2011 amounts to approximately US$ 3 Billion. This investment portfolio is second only to that of the Western Province in comparison with other provinces in Sri Lanka. In the financial sector alone, 225 branches of banks and 76 finance and leasing companies have been established in the Northern Province since 2009. The work on the Northern expressway is being expedited. After 23 years, direct train services between Colombo and Killinochchi will resume shortly with the opening of the 63 kilometre rail track between Omanthai and Killinochchi, further consolidating connection between Colombo and the Vanni heartland.
It is a point of considerable satisfaction for the Government that for the first time since the introduction of the 13th amendment to the Constitution and Provincial Council system in 1987, elections to the Northern Provincial Council will be held on 21 September 2013, along with those for the Central and North Western Provinces.

We have additionally extended an invitation to the Special Rapporteur on Education to visit Sri Lanka in January 2014. Sri Lanka will continue to process requests for visits by special procedures mandate holders.
These actions, once again, prove those who doubted the will of the Government wrong.
Finally, we speak today in the aftermath of a week-long visit to Sri Lanka undertaken by the High Commissioner from 25 to 31 August, in response to the invitation the Government had extended to her in April 2011. The High Commissioner was provided with unfettered access to visit all parts of the country, including the former conflict-affected areas of the North and the East. In addition to a call on the President and meetings with the Chief Justice and stakeholders in Government including Ministers, the Attorney General, the head of the task force monitoring progress on the National Action Plan implementing the recommendations of the LLRC, Secretary/Defense. She also met with opposition political parties including the Tamil National Alliance, members of civil society and victims of the conflict.
Since the High Commissioner was able to ascertain first-hand the multi-faceted progress in the reconciliation process in Sri Lanka, we believe she is now better placed not to give credence to unsubstantiated allegations of those with vested interests and agendas, largely driven by certain extreme elements in the Sri Lankan Diaspora. In this context, we look forward to an objective and unbiased approach to Sri Lanka by the High Commissioner in fulfilment of her mandate.

With regard to the immediate concern’ for the protection of human rights defenders, journalists and communities she met in Sri Lanka referred to by the High Commissioner, we wish to note that Sri Lanka has a vibrant civil society.

This was amply demonstrated through the wide range of meetings and events that were arranged independently by the UN team in Colombo with civil society groups and persons of all ethnic and religious denominations for the High Commissioner during her recent visit. The Government of Sri Lanka is fully committed to protecting human rights defenders, and in this regard we have already requested the High Commissioner and her office to provide specific information of such incidents, if any. However, the Government does not wish to add credence to unsubstantiated allegations that are made for political purposes by certain groups with vested interests, who have also done so previously to embarrass the Government, which is in contravention of GA resolution 60/251.
In conclusion, Mr. President, Sri Lanka looks forward to continuing its constructive engagement with the HRC, the High Commissioner and the OHCHR.