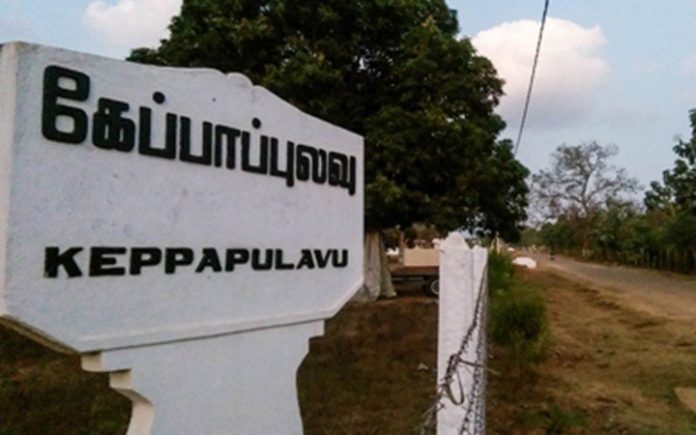 “We want to sleep, cook, eat in our own house and farm our own land”

700 days is a long time for a day and night protest outside an Army camp. Since March 1, 2017, the people of Keppapulavu, located in the Mullaitheevu district in Northern Sri Lanka, have been doing just that. They have had to brave intimidation and harassment from the Army, Police and intelligence agencies, and also brave the sun, rain, heat, cold and dust. They have faced challenges in continuing their livelihoods, sending children to school and caring for their elderly. It is the longest running community-led day and night continuous protest for land in Sri Lanka. They have also engaged in protests in Colombo and elsewhere, and have participated in meetings with government politicians, local Tamil politicians, government officials, the media, religious clergy, representatives of international community and others.

Buddhist Temple
Their stand inspired similar protests. They tasted some success, when a part of the Army occupied Keppapulavu was released in December 2017. But the protest for the release of the full extent of their lands continued.

Last year, President Sirisena promised to return occupied lands in the North and East by December 31, 2018. When this promise was broken, Keppapulavu residents marched to the Army camp and demanded their land. The Army refused to speak to them. In subsequent discussions with government officials, an Assistant Government Agent (AGA) had promised them their land would be released by January 25, 2019.

Soon after, one of the staff officers of the newly appointed Northern Governor had met some members of the Keppalulavu community. Afterwards, on Sunday, (January 20) the Governor also met them. Both had requested more time, but the community members, who had seen so many similar “time-buying” exercises, insisted that January 25 be the final day when all the land would be returned to them. One lady had asked the Governor whether he was going to ensure release of land by January 25, or whether he wished to see the guns of the Army turned on her and other villagers.

“If our lands are not released by 25th January, we will go and reclaim our lands” is what the villagers told me, and what they had told the Army, the Governor of the Northern Province and government officials in meetings they had had the last few days and weeks.

The occupied land sits between the main road between Puthukudiyiruppu and Vattrapalai and borders the Nanthikadal lagoon. It’s very fertile agricultural land and the lagoon has plenty of fish, prawns and crabs. “We can cross our legs and sit in the garden and still have enough food” one man told me. In addition to the houses, most of the community buildings such as the community hall, school, Rural Development Society (RDS) and places with strong emotional attachments such as the church and cemetery remain occupied by the Army. The community life in this village, woven around agriculture and fishing, and the traditional and rich cultural and religious practices, was destroyed first by the war and then by the Army occupation.

Indrani, a vocal community leader, says the local Army Headquarters is now in her garden and house. Last week, she had seen a Neem tree in her garden cut down. She described how she had marched to the camp and demanded to know why the Army had cut down the tree in hergarden. A senior officer had apologized, and at her insistence, had sent the tree that had been felled to her relative’s house, which she showed to us. She says she had insisted the Army first ask her if they need anything from her garden.

His home, as well as the land and homes of other Keppapulavu residents’, now Army-occupied, was visible from across the road, with the beautiful view of Nanthikadal lagoon beyond it. Listening to them was heart breaking as well as making me angry.

“Why are they (the Army) in our houses, our lands, when there is so much forest land around the area?”

“We want to live peacefully with Sinhalese. Why are they (Army) obstructing this by occupying our land? Do they want Prabhakaran (the late leader of the LTTE) to come back?” was another question that was raised.

I recalled similar sentiments heard during my previous visits spanning several years. “Every year our land changes more and more. Some houses have been destroyed. The wells have been closed. Other buildings have been put up. Boundaries have been demarcated differently. But the jak and coconut trees which we planted have started bearing fruit.”

“When I enter my home, it feels as fondly familiar to me as the love of my mother and father…”

I had known some of these community members for around 10 years, when they were being detained in “Menik Farm”. Even then, they always talked about the richness and beauty of their lands and their yearning to return. Even when I met them after they had been compelled to accept alternative lands in a nearby jungle area, they insisted on the right to return to their own land.

The day I visited Keppapulavu was also the day President Sirisena had visited nearby Mulliyawalai, around 10 kilometres away from the protest site. But the long suffering and struggling Keppapulavu people were clearly not of concern to the President who is the son of a farmer, and from an agricultural area.

It is now nearly 10 years since the end of the war. And it is more than 10 years since the Army had forcibly occupied Keppapulavu. For the people of Keppapulavu, justice, peace and reconciliation remain empty words – until and unless they are able to return to their houses, lands, and way of life.

As they said, “We have survived the war but, now we have to die for our lands!”