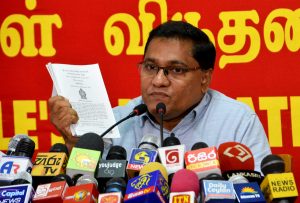 The JVP opposes the Prevention of Terrorism Act enacted in 1979 as well as the new Counter-Terrorism Bill and demands that the government abolishes the old Act and withdraws the new Bill that it intends introducing.
This was stated by the Information Secretary of the JVP Vijitha Herath at a press conference held at the head office of eh JVP at Pelawatta today (25th).

Several clauses from the bill enacted in 1979 have been removed and several more flagrant clauses have been entered, it is a bill to implement state terrorism on the pretext of countering terrorism and if the bill is enacted the right to engage in trade union activities too would be abolished said Mr Herath.

On 2nd September the government presented a draft of a new prevention of terrorism act to replace the bill that existed. It was named the ‘draft of the prevention of terrorism act’ in Sinhalese, in English, it was named ‘Counter Terrorism Bill’. Mr J.R. Jayawardene, the executive president, in 1979 presented the Prevention Of Terrorism (Temporary Provisions) Act (No. 48 of 1979) to Parliament as a temporary move.

There have been so many such incidents in the past. The innocent were adjudged guilty. Also, a suspect could be detained for 18 months without being produced before a Court or a case being filed. After the 18 months, the period could be extended. This was a person could be detained for 10 – 15 years. Even today there are so many being detained for long periods under the PTA. They have not been produced before Courts to find out whether they are guilty or not. It is a very inhuman Act. There is no justification in keeping someone as a suspect for 10 – 15 years. A person can be imprisoned once he is adjudged guilty by a Court. However, this Act could detain a person for a long period without a trial. This inhuman Act should be abolished.

When this government came to power it gave a promise that the PTA would be abolished. In the joint statement with UNHRC, it was promised to abolish PTA. We should abolish the Act not because the UNHRC tell us to do so. Such Acts are a hindrance to the civil rights of the citizens of the country. That’s why they should be abolished. What the government has done is a deception after spending 3 ½ years for its promise. What the government has done is to remove a few clauses from PTA and present a new Bill. The existing Act doesn’t accept a statement given before an ASP as evidence. Certain such clauses have been removed and more draconian clauses have been included in the Bill that has been presented.
There are several harmful clauses in the new Bill. The employees of the state and private sectors oppose when they do not get due rights or when they are treated unfairly. They have a right to oppose. According to the proposed amendment to PTA, the President can make their services essential services. The issue is that the new Bill describes hindrances to the essential services as terrorist acts. It is a very dangerous situation. According to the existing law they did not become guilty for a terrorist act. However, with the proposed Bill it could be so. How could such trade union action be classified as terrorist acts? What they have done is to grab the right of the people to oppose. According to the Bill, obstructing or damaging any essential infrastructure facility is an offence. This is a very dangerous situation.

Also, clause 62 of the Bill states a police officer having the rank of SSP or above could order not to hold any rally, meeting or demonstration at any given venue. According to the existing law in the country, such an order cannot be made by a police officer. Only a Court could give such an order under certain circumstances. This Bill has given the duty of the Courts to police officers. A police officer is given the right to halt activities of the people. This is a very dangerous state. This is not prevention of terrorism but the suppression of people’s democratic rights.

Also, we know that the government, without any consideration for privacy, is secretly listening to telephone conversations. It is illegal and an obstruction of privacy of citizens. There is no law to tap telephones. However, clause 67 of the Act states the police could have this right. The police get the power to listen to any telephone conversation, audio clip, video conversation or any communication through any other media. This is abolishing the right of the citizens. Also, this Bill is presented not by the Minister of Justice or the Minister of Defense but by the Minister of Foreign Affairs. This means the Bill is presented for the sole purpose of presenting it to UNHRC. The Bill is brought to fulfil the need of the UNHRC. Nevertheless, the laws required to suppression in the country too have been included.

More power to the Minister

According to clause 81 of the Bill, the Minister of Law and Order can issue an injunction. As such the Minister gets the power to suspend or ban any meeting, activity or programme to be held by any organization. He could continue this suspension or the ban for a year. After the year he could extend the ban or suspension. As such, the Minister get the power to arbitrarily suspend or ban the activities of an organization. The Minister also gets the power to monitor the activities of any person and limit his or her movements without the person being imprisoned. The Minister can also ban any media institution if he thinks that it acts against him or the government. The ban could be for one year. There are such draconian laws included in the new Bill.

This is a sugar-coated poison pill

Several clauses that were severely criticized have been removed. The UNHRC has been given the power to monitor detainees. There are a few such clauses. However, many arbitrary acts that could not be included in the previous Act have been included in the new Bill. This is really a sugar-coated poison pill. The police have been given draconian powers. The Bill is a severe obstacle for the freedom of the citizens of the country and democracy. It is a bill to implement state terrorism on the pretext of countering terrorism.

The biggest joke is in English the Bill is named ‘Counter Terrorism Act’ and in Sinhalese, it is named ‘Prevention of Terrorism Act’, the name that existed. The English name gives the true intention of bringing the new Bill. In Sinhalese it is prevention but in English, it is countering terrorism. People’s sentiment against terrorism is utilized to bring in state terrorism. We, the JVP, demand the government to immediately withdraw the draconian Bill on behalf of democracy and freedom in the country. The government should abolish the old act as well as the Bill they attempt to bring in.”