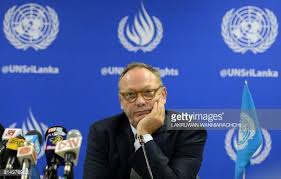 In his preliminary findings of the visit to Sri Lanka UN Special Rapporteur on human rights and counter-terrorism, Ben Emmerson said that ” I am pleased to be able to announce today that the Government has undertaken to engage in a process of constructive dialogue with my mandate in an effort to improve the draft legislation before it is placed before Parliament. There is still time to get this legislation right, and for it to become the cornerstone of a new order in Sri Lanka. The Ministry of Foreign Affairs has undertaken to consult with my team in Geneva within the next two weeks. The aim of this dialogue is to identify the flaws in the current draft, and to seek solutions for putting them right.”

Within 24 hours of Ben Emerson’s statement made in Colombo  Minister of Justice Rajapaksa has told the Sunday Times that ” the Government will not take instructions from the United Nations on how the new Counter-Terrorism Bill is drafted and will go ahead with the bill approved by the Cabinet. “The laws have to be made here and they have to be approved by our Parliament. We cannot have others doing it for us,” ”

This clearly contradicts the commitment made by Foreign Ministry to consult the UNHRC within next two weeks.