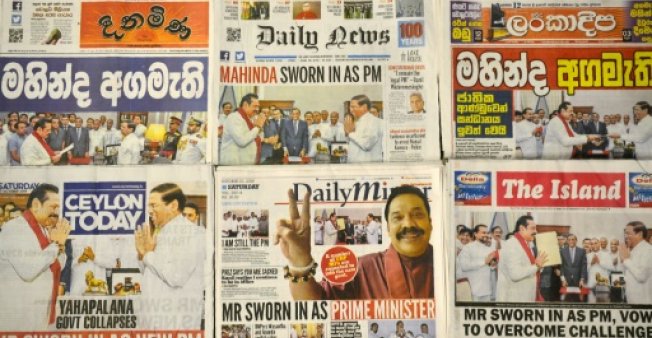 Sri Lanka’s journalists have become caught in the centre of the bitter power struggle between the country’s rival prime ministers, an international media watchdog said Wednesday, urging authorities to ensure their safety.

Sacked prime minister Ranil Wickremesinghe has refused to hand over power however, saying the move was illegal.

“The violence with which Mahinda Rajapakse’s bully boys took over the state media is absolutely unacceptable,” said an RSF statement.

“We call on all parties to act responsibly by guaranteeing journalists’ safety and by respecting their editorial independence, so that impartial news coverage is available to the public.”

“They took control of the two public service TV channels, Rupavahini and ITN, the radio stations that are part of the Sri Lanka Broadcasting Corporation, and the Lake House press group,” it added.

RSF said the SLPP activists “forced journalists at the Daily News and the Lake House group’s two leading weeklies, Silumina and Sunday Observer, to change the front pages of their next issues”.

Journalists said that in general state media has become pro-Rajapakse while private networks have kept up coverage of Wickremesinghe and his party.

RSF said the constitutional crisis recalled the “darkest hours of the Rajapakse presidency between 2005 and 2015,” when he lost an election to current president Maithripala Sirisena.

During Rajapakse’s tenure, 17 journalists and media workers were killed, according to rights organisations.

In 2015, Wickremesinghe helped Sirisena to defeat Rajapakse and formed a unity government, but the two have drifted apart over policy and personality clashes.

Tens of thousands of Wickremesinghe supporters blocked roads in Colombo on Tuesday, stepping up a showdown with Rajapakse.

Official sources said parliament speaker Karu Jayasuriya was to meet with the president on Wednesday to try to convince him to end a suspension of parliament so that deputies can vote on which prime minister they back.

Sirisena suspended parliament on Saturday to forestall any attempt by Wickremesinghe to prove he has a majority among the 225 lawmakers. Jayasuriya has warned the crisis could lead to a “bloodbath” on the streets if the assembly does not hold a vote soon.

Behind the scenes, the rivals are seeking to tempt lawmakers to defect to bolster their numbers if a vote is held.

Rajapakse, 72, has given five legislators from Wickremesinghe’s party ministerial portfolios in his cabinet after persuading them to change sides.

Wickremesinghe has convinced at least two lawmakers from Sirisena’s camp to join his United National Party.

Following the latest defections, Wickremesinghe has 104 MPs in the 225-seat chamber while Rajapakse and Sirisena together have 99. A majority of the 22 remaining MPs are expected to back Wickremesinghe in any vote, observers said.