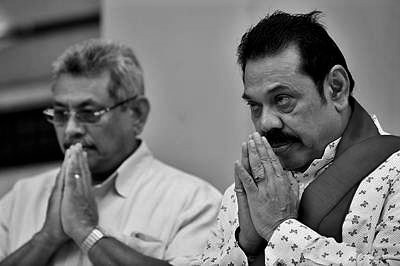 These, among other references in his speech, provide a positive spin and opportunities to some in the international community who search for openings to engage. Yet, for many Sri Lankans, these words are facetious and hollow.

Whilst the speech was targeting an international audience, there seems a disconnect with the very real challenges faced by many Sri Lankans. Notable was the omission that Sri Lanka was under a state of emergency at the time President Rajapaksa delivered his speech.

These incidents involving a state minister and a Buddhist monk represent two instances among many others where minorities were targeted, and capture the climate of impunity in Sri Lanka.

It also missed the very real concerns of heightened authoritarian and military governance, structural inequalities reinforced by the pandemic, and multiple policy blunders by the Rajapaksa regime with direct bearing on the cost of living and livelihoods with implications for significant sections of the population.

It was also delivered on the heels of a deeply troubling incident where a state minister in charge of prisons in President Rajapaksa’s Government allegedly entered the Anuradhapura Prison in an inebriated state, forcing 10 Tamil political prisoners to kneel before him and threatening them with his gun.

Gnanasara on the stage

This incident, against the backdrop of several violent prisons riots in Sri Lanka that resulted in deaths, coupled with custodial torture and death, drew strong condemnation from many quarters. The gravity of the incident was acknowledged in Parliament when the Minister for Justice apologised for the incident, but genuine reckoning from the State Minister in question is yet to happen, as he continues to function as a State Minister in the Rajapaksa Government.

Furthermore, September also saw a divisive Buddhist monk, convicted for contempt of court and subsequently given a presidential pardon, make insulting comments against the Muslim religion on a programme hosted by a private television channel in Sri Lanka. Despite the issue being raised in Parliament and a complaint made with the authorities, there is no known information of any action taken against the monk.

These incidents involving a state minister and a Buddhist monk represent two instances among many others where minorities were targeted, and capture the climate of impunity in Sri Lanka.

Despite the official narrative of resorting to “domestic processes”, the near two years of the Gotabaya Rajapaksa presidency has seen the dismantling of the limited work done with emblematic cases and further contributing to impunity and democratic decay in Sri Lanka.

These occur in the country where the Rajapaksa Government has taken concerted steps, since being elected to office in November 2019, to roll back on pro-democracy reforms and undermine independent institutions. Amidst the pandemic and the narrative of national security, Sri Lanka also witnessed a steady number of ad hoc measures taken to undermine the rule of law and impede civil liberties.

Furthermore, anyone seen as critical is demoted, detained, or intimidated, coupled with the appointment of investigations and commissions of inquiry, which take political victimisation to new levels. Despite the official narrative of resorting to “domestic processes”, the near two years of the Gotabaya Rajapaksa presidency has seen the dismantling of the limited work done with emblematic cases and further contributing to impunity and democratic decay in Sri Lanka.

The long list of emblematic cases in Sri Lanka

Last week marked 21 years since Mylvaganam Nimalarajan, a journalist based in Jaffna, was gunned down at his home by unidentified gunmen. Media reports blamed a government-aligned Tamil political party for this murder, with its leader continuing to enjoy a ministerial portfolio in the present Government. The suspects of the case were released in May 2021 and with it, the door to justice was shut. The case of Nimalarajan is one of many instances where the media in Sri Lanka faced attacks but with no accountability. The alleged abduction of Prageeth Ekneligoda, the assault on Keith Noyahr, and the assassinations of Dharmeratnam Sivaram and Lasantha Wickrematunge are a few among a long list of emblematic cases related to media where impunity is enjoyed by those allegedly associated with the attacks.

AG and the Former Navy Commander

The fragility of the criminal justice system was yet again exposed this month when the Attorney General informed the Court of Appeal that his office was not proceeding with the indictment against former Navy Commander Admiral of the Fleet Wasantha Karannagoda, in the alleged abduction and murder of 11 civilians. This case, one of the few cases where investigations resulted in indictments in recent years, is also extraordinary for the fact that media reports exposed not only the gruesome details of the abduction for ransom racket involving navy personnel, but also the complicity of key individuals in this heinous crime and the complex web of cover-ups and action taken to subvert justice by politicians, state officials, and others.

The former Navy Commander, his political backers, and the legal team may celebrate this recent victory, but reckoning is far from over.

Thus, the reasons for the Attorney General’s decision to not proceed with charges against Karannagoda must be contrasted against the evidence before court and the decision by the same department to indict him, with questions raised as to what transpired in the interim to withdraw charges. The Navy 11 case is merely one of many emblematic cases where the system not only failed to deliver on justice, but protected and promoted those accused of heinous crimes.

The case also stands out for another reason – it showed how an accused can outsmart a criminal justice system through shrewd legal measures to escape accountability in Sri Lanka. Despite the delays, stay orders, and now being discharged from the case, Karannagoda and his legal team were unable to prevent the publicity the case received including exposing the gruesome details of abduction, extortion, and murder of civilians, and the protection enjoyed by some; nor has years of watching the numerous setbacks in obtaining justice, including a system that continuously fails victims, diminished the courage and resilience of Sarojini Naganathan and other victims. The former Navy Commander, his political backers, and the legal team may celebrate this recent victory, but reckoning is far from over.

Even the rarest of cases that make it to court are confronted by numerous challenges. The presidential pardon of Sunil Ratnayake in 2020 is one such example. After numerous delays in the legal proceedings, Ratnayake was found guilty of the massacre of Tamil civilians, including a five-year-old child in Mirusuvil, Jaffna. The incident that occurred in 2000 was unique, where the trial resulted in a conviction of a military person in 2015, with the Supreme Court affirming the conviction in 2019.

These and many other emblematic cases expose Sri Lanka’s broken criminal justice system that is perceived by many as protecting the accused and continuously failing victims. The long delays with cases, reports of evidence tampering, and intimidation of victims and witnesses are merely some reasons for the denial of justice in Sri Lanka.

There are also increasing concerns with the role of the Attorney General’s Department with persistent calls for urgent reforms to the institution. The recent decision to not proceed with charges against Karannagoda in the Navy 11 case is not an isolated case. Earlier this year, the Attorney General decided to discontinue the prosecution in the assassination of MP Joseph Pararajasingham, another emblematic case that has faced long delays. Pararajasingham was gunned down during Christmas mass in the Batticaloa Cathedral in 2005 with several setbacks faced in the case. Notable is that one of the accused was a former Liberation Tigers of Tamil Eelam (LTTE) cadre and present MP Sivanesathurai Chandrakanthan (alias Pillayan).

Another case that recently received attention was the decision by the Attorney General to withdraw indictments against Finance Minister Basil Rajapaksa and others related to the alleged misappropriation of public funds in the Divineguma Department. The fact that the Attorney General has sole discretion to proceed or not to issue indictments against individuals and to discontinue criminal proceedings before a high court in respect of a suspect, is of concern, with these cases raising questions of how the department reaches such decisions and its implications.

All this speaks to a system that is rotten to its core. It is a system that has corroded under successive governments, with an elite that has abused the system to suit its own needs and protect its own.

These are pertinent questions considering the fact that the department, in a matter of months, has shifted in its positions on several cases, all involving politicians in government or close to the ruling elite. This is also against the backdrop of calls for structural reforms including the call for the establishment of an independent prosecutor, a proposal made by several including the Western, Southern, and Sabaragamuwa Disappearances Commission (1994) and the All Island Disappearances Commission (1998).

The few examples highlighted in this article are only an indicator of the many setbacks in the justice system in Sri Lanka. The multiple failures of the system beg the question as to why victims should trust a system that continues to betray them; this, when politicians and others aligned with the ruling party have on several instances been able to subvert justice with total impunity.

The recent incident of the alleged abuse of power by an inebriated state minister is one example of an individual known for his involvement in past violence but having escaped any legal consequence. The fact that he continues to remain a state minister, more than a month after the incident, speaks to a political culture that fails to penalise but protect and, on occasion, promote perpetrators.

Unless and otherwise urgent structural reforms are introduced that independently investigate and prosecute crimes in Sri Lanka coupled with a paradigm shift in the political culture, we are likely to continue to witness more violence and a further entrenching of impunity. This is also at a time when there is new vigour towards international justice with several processes underway including the evidence-gathering mechanism established via the United Nations Human Rights Council Resolution 46/1, attempts at universal jurisdiction, and other initiatives where the wheels of justice are starting to turn. One would think that such initiatives, if nothing else, would propel the Government and others towards course correction.