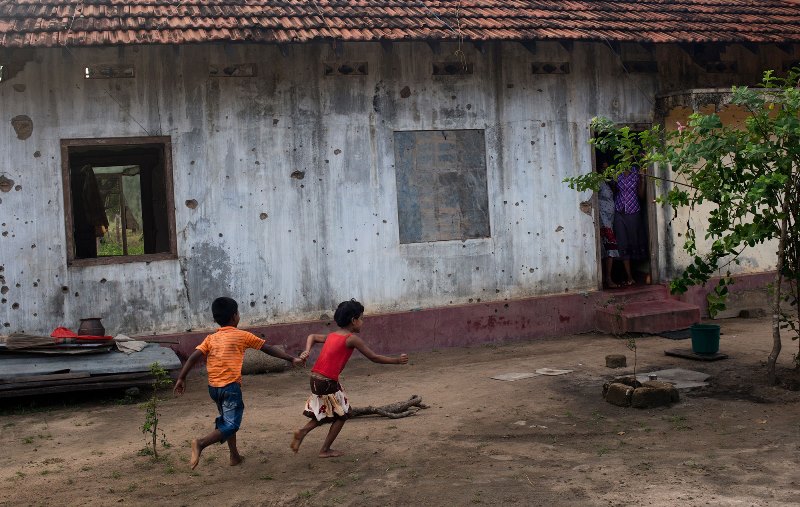 (Two children play in front of their house;Image courtesy AFP)

Issuing a statement Sri Lanka Human Rights Commission says that it is deeply concerned by attempts made by some quarters closely associated with the current constitution-making process to prevent the inclusion of economic, social and cultural rights (ESC rights), such as the right to education and an adequate standard of health, from the constitutional Bill of Rights as full-fledged rights for which judicial remedies are available. It has been argued that only civil and political rights should be guaranteed as full rights. Arguing strongly or the inclusion of Economic, social and cultural  rights in the new constitution that is being formulated it  calls on concerned citizens and civil society organizations to step up advocacy for full constitutional recognition of all human rights so that there will be no future regrets on missed opportunities.

The Statement of the Human Rights Commission of Sri Lanka (HRCSL):

The Need to incorporate Economic. Social and Cultural Rights in the Future Constitution of Sri Lanka The HRCSL calls on HE the President to give leadership in calling for, and the Hon.Prime Minister and all members of the Constitutional Assembly to ensure, the incorporation of economic, social and cultural rights in the future constitutional chapter on rights as fully protected rights. The HRCSL is deeply concerned by moves by some to prevent the inclusion of such rights in violation of the principle that human rights are all inter-connected and cannot be divided.

The constitution-making process must necessarily recognize the views articulated by the public in the public consultations process (201G) demanding the constitutional protection of rights such as the right to education, an adequate standard of health, housing and fair conditions of labour in the future Constitution. Failure to do so is also a violation of legal obligations undertaken by Sri Lanka, particularly under the lnternational Covenant on Economic, Social and Cultural Rights (1956). Sri Lanka’s improving human rights record will be sullied by such a failure and would seriously undermine public confidence in the future Constitution.

The HRCSL is deeply concerned by attempts made by some quarters closely associated with the current constitution-making process to prevent the inclusion of economic, social and cultural rights (ESC rights), such as the right to education and an adequate standard of health, from the constitutional Bill of Rights as full-fledged rights for which judicial remedies are available. It has been argued that only civil and political rights should be guaranteed as full rights.

ln March of this year, the HRCSL made submissions before the Public Representations Committee on its proposals for constitutional reform. The proposals were sent to the Hon. Prime Minister and the Hon. Speaker and were made available to the public in Sinhala, Tamil and English. ln its proposals, the HRCSL endorsed the Draft Charter of Rights completed in 2009 for inclusion in the new constitution of Sri Lanka. The Charter, formulated by a group of experts appointed by an inter-ministerial committee guarantees not only civil and political rights but also economic, social and cultural rights as full-fledged rights capable of attracting judicial remedies.

The HRCSL proposals also emphasized the need to, among other things, recognize the promotion of social justice as a fundamental constitutional principle. lt reiterated the importance of incorporating a strong system of checks and balances, including judicial review of legislation to ensure the effective protection of people’s rights. Above all, the need to recognize the principle of supremacy of the constitution was underscored.

The HRCSL proposals were made fully conscious of the unique opportunity this moment presents for Sri Lanka, especially as a post-war society, to acquire a modern constitution that addresses concerns of its people within a strong democratic State structure.

This is a moment to right the wrongs of the past, and forge ahead to create a new Sri Lanka that is humane and just, as much as it is prosperous. Protection of the rights of the people in a strong and holistic manner is critical to achieving those goals. The post conflict constitutions of South Africa, Kenya and Nepal, for example, are illustrative of such efforts. Sri Lanka too should follow suit and not miss out on this unique opportunity.

The HRCSL points to the following in that regard:
1. Human rights are recognized in order for people to live in dignity realizing their full potential. As much as all aspects of human life are inter-connected, so also are human rights. lt would be futile to divide rights and selectively protect only some of them. Today, the idea of indivisibility of rights is a firmly established principle recognized by the community of nations. The Vienna Declaration and Program of Action adopted by consensus by 171 States participating in the World Conference on Human Rights held in Vienna in June 1993 declares that ‘All human rights are universal, indivisible and interdependent and interrelated’.

According to the detailed report of the Public Representations Committee on Constitutional Reform (May 2016), public representations had strongly demanded the strengthening of the existing constitutional chapter on rights by including rights such as the right to education, an adequate standard of health, housing and just conditions of work (Chapter 12). lt is clear that such rights are no longer viewed by the people as welfare entitlements. They are recognized as human rights. lt is worthy of note that the representations place strong emphasis on social justice in shaping the nature of the State. The demand is clearly not for cosmetic entitlements, but for full-fledged rights.

3. The need to secure social justice in a post-war society cannot be emphasized more. lt is the glue that could hold a fractured society together by building trust. People need to believe that the State is empathetic to their critical needs such as housing, food security, livelihoods, schooling for children and healthcare. Experiences in post-conflict societies everywhere, more recently in countries such as South Africa, Kenya, Nepal and Colombia, have proved that a constitutional to social justice is needed to bring about political stability and instill credibility

4.It is significant that recent public representations have referred to Sri Lanka’s international human rights obligations in articulating their demands (Report on Public Representations on Constitutional Reform (2016), Chapter L2). Reference has been made, among others, to legal obligations under the international Covenant on Economic, Social and Cultural Rights (ICESCR) which Sri Lanka ratified way back in 1980.

Often, what is at issue is not the unavailability of resources but the failure to use available resources in a responsible and reasonable manner to realize the rights of the people. lnternational human rights obligations compel States to utilize resources in a disciplined and accountable manner for public benefit.

6. Where there is a right, there is a remedy’ ( (ubi jus ibi remedium)) is a sacred legal maxim. Critics of full recognition of ESC rights argue that canvassing such rights before courts would permit unelected judges to pronounce upon policy matters involving allocation of public resources and, therefore, should not be constitutionally recognized as rights for which judicial remedies would be available. That position is unacceptable for conceptual reasons and is also in violation of the international obligations of Sri Lanka.

Judges would not called on to initiate policy making in that regard, but are called on to review questionable policies. That is an essential feature of any functional democracy. The ICESCR obligates Sri Lanka to provide remedies, including judicial remedies, for violation of ESC rights (Committee on Economic, Social and Cultural Rights, General Comment No.9 on ‘Domestic Application of the Covenant’, ElC.Lzl L998124 (1998) ). The UN Committee on Economic, Social and Cultural Rights, which supervises the implementation of ICESCR, has declared that it is no longer possible to deny remedies, including judicial remedies, in regard to ESC rights.

Human rights discourse at both national and international levels has moved on to new frontiers, recognizing that ESC rights as well as civil and political rights entail positive as well as negative State obligations and that the realization of all rights have financial implications for the State.

ln fact, the right to vote and the right to a fairtrial (civil and political rights)are two of the most expensive rights entailing the formulation and implementation of complex policies. That do not mean, therefore, such rights should be denied judicial remedies. However, skeptics argue that the right to education and right to health, for example, should not have judicial remedies as they entail both State resources and policy implications. Therefore, such matte.rs should be left to the whims of the political branches without judicial review.

The HRCSL finds such a position to be illogical and internally contradictory. As the ESC rights Committee points out, such reasoning negates the linkage between rights (indivisibility of rights) and seriously curtails the possibility of courts to protect the rights of the most vulnerable and disadvantaged in society (General Comment No.9 (above), para 10).

7. Reluctance to fully recognize ESC rights has much to do with one’s economic policy orientations. Human rights of the people cannot be contingent on the shifting vagaries of the market or official economic policy priorities that may change from time to time.

ln Sri Lanka too public representations have been made to that effect (Report of the Public Representations Committee (2016), p 1271. HRCSL proposals on constitutional reform have recommended that human rights obligations be extended to private actors. The right to property and the right to engage in an occupation of one’s choice should be balanced with obligations to larger society. Rather than be deterred by such obligations, private business entities should welcome the opportunity to earn public goodwill and credibility. Many are discovering that socially responsible business practices are good for business. lt is evidenced by the 8000 + companies that have joined the UN Global Compact.

9. lt is also argued that full constitutional recognition of ESC rights would encroach on devolved powers. Devolution of power is not a license to violate or diminish people’s rights, but is a means to better protect rights. Recognized human rights norms recognize minimum standards that should be respected and protected by all constituent units of a state.

The world is watching the reform agenda in Sri Lanka with great anticipation, especially in regard to deepening of democratic governance and protection of human rights. Regression of the kind proposed by the critics of ESC rights would be a serious rolling back of progressive constitutional trajectories established by more recent constitutions such as those of South Africa, Kenya and Nepal. It would be a black mark against Sri Lanka’s improving human rights record. Not only should the people of Sri Lanka make use of this unique opportunity to secure a strong constitution for themselves, but also ensure that a healthy precedent is established for other countries to emulate.

Accordingly, the HRCSL calls on His Excellency the President to give leadership in this regard. We urge the Hon. Prime Minister and all members of the Constitutional Assembly to ensure that the ongoing constitutional reform process ensures the inclusion also of ESC rights in the future constitutional chapter on rights as fully protected rights capable of vindication by courts, respecting the principle of indivisibility of rights that would enable the full enjoyment of human rights by the people of Sri Lanka.

The HRCSL calls on concerned citizens and civil society organizations to step up advocacy for full constitutional recognition of all human rights so that there will be no future regrets on missed opportunities.