Sri Lanka: GSP plus benifits should be shared with workers – EU delegation 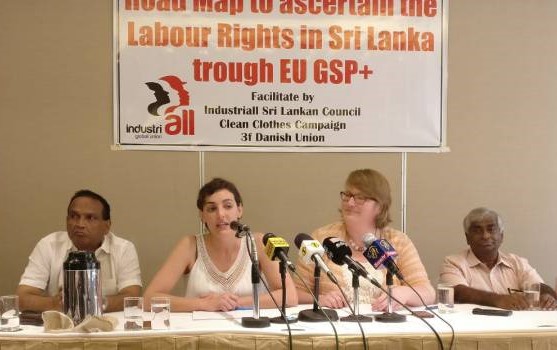 Issuing a statement the Fact Finding Mission including Members of the European Parliament Anne-Marie Mineur and Lola Sánchez Caldentey that visited Sri Lanka has emphasised that GSP plus concessions will be granted to Sri Lanka only  that the benefit goes also to the workers.

The statment further says that:

The main focus of the Fact Finding Mission (FMM), which took place between the 10 and 12 April, has been to evaluate the status of labour rights in the country, which is a main concern for some political groups in the European Union. As a member of the delegation Anne-Marie Mineur stressed, “it is the Government´s obligation to effectively guarantee the fundamental rights of workers and their trade unions. Collective bargaining and the right to strike should be an integral part of this”. Her colleague, Lola Sánchez Caldentey stressed the European Union shall not grant a special trade status to Sri Lanka if the money coming from this advantage remains only in the pockets of a few business people.

The European Union will decide in the following month whether Sri Lanka is duly entitled, or not, to be granted Generalized System of Preferences Plus status (GSP+). This status is a component of the EU policy for developing countries which offers trade incentives to those which implement core international conventions on human and labour rights, sustainable development and good governance.

Members of the European Parliament Anne-Marie Mineur and Lola Sánchez Caldentey with other members of the FFM that includes trade union 3F of Denmark, International Transport Workers Federation (ITWF) and Clean Clothes Campaign (CCC) were invited by the invited by IndustriALL Sri Lanka Council, with the aim of evaluating the progress of the country in recent years. “In 2015 we received with satisfaction the commitment of the Sri Lanka government to put in place legislation to address Human Rights violations. However the implementation of that legislation remains very questionable”, says Anne-Marie Mineur.

The delegation has encountered workers who have been object of labour rights violations, including harassment to trade unions, illegal dismissal of trade union leaders, sexual harassment and labour rights violations within the Free Trade Zones. After more than ten meetings the delegates had, Lola Sánchez Caldentey concludes that “if the European Union consumers knew the abusive conditions under which the women do the cloth that they buy, they would be ashamed” to which Anne-Marie Mineur adds “the government must ensure that these workers can organize themselves through trade unions, because otherwise they will keep on being exploited”. The delegates have also expressed their concerns about the extensive use of manpower agencies for co-working arrangements, which have undermined freedom of association and collective bargaining; and on the fact that the judiciary has increasingly been interfering in labour disputes and collective bargaining to the detriment of trade unions.

Following this fact-finding mission, the delegation met among other officials, the Minister of Labour Mr.W.D. John Seneviratne to whom they have addressed their serious concerns regarding labour rights. The Minister has expressed his commitment to ensure that 50% of the benefits of GSP+ status will be for the workers. “We obviously welcome this engagement, but we still don’t know how the government will deliver this promise; we will therefore be closely following its implementation. From our perspective, the first step to make sure that the benefits go to the workers is to make sure that they get fair wages, have the effective right to organise and bargain collectively. Signing a convention is just the beginning. The real challenge is to implement it; to ensure that workers not only have the theoretical right to organise, but also that, in reality, there is no harassment towards trade unions by the employers”, concluded the delegates, who endorsed the trade union’s road map to assert Labour Rights in Sri Lanka as a way to ensure that workers will effectively benefit from GSP+ status.