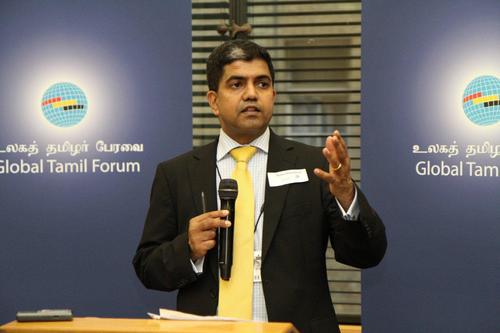 Global Tamil Forum which has been an unofficial diaspora partner of the Tamil National Alliance says that it is dismayed that more than eight years after the end of war, Sri Lanka has yet to demonstrate that it is genuinely committed to addressing the accountability issues occurred during the brutal armed conflict.

Despite twice co-sponsoring UNHRC resolutions calling for comprehensive transitional justice measures, the present coalition government has not lived up to its commitments and yet to take any meaningful steps in this respect, says GTF in its latest press release.

it further says that:

The lack of progress to-date in many ways is eerily reminiscent of the past when commitments made on political and governance issues concerning to the Tamil people (such as Bandaranaike-Chelvanayakam or Dudley-Chelvanayakam pacts) were reneged at the slightest of political opposition. While GTF acknowledges that some progress has been made it is far from adequate.

A careful comparison of the commitments made and the actions carried out unambiguously shows a glaring disparity. No efforts have been made by the top Sri Lankan leaders to integrate credible international participation in the local judicial processes as stipulated in the UNHRC resolutions. The report from the government’s own Consultation Task Force (CTF) – set up to recommend transitional justice measures based on country-wide consultations – has remained ignored for more than six months after its official release, reinforcing the impression most Tamils have that setting up Commissions and then discarding their reports is a continuation of delaying strategy practiced by many previous governments.

The Office of Missing Persons (OMP), the only transitional justice mechanism Sri Lankan Parliament enacted exactly a year ago, was signed into law by the President only recently and yet to be operationalised. Mothers of disappeared have been protesting for over five months crying for attention living with the agony of not knowing the fate of their children for so many years. A month has passed since President Sirisena met with the relatives of the missing, but his promise to release any existing lists of surrendered and detained within 48 hours remains unfulfilled. We fail to understand the obstacles in bringing justice to these mothers, four of whom have died since the vigils started, and the unwillingness on the part of the government to bring closure to this highly emotive issue.

The parliamentary process to ratify Enforced Disappearances as illegal has been indefinitely postponed and the Prevention of Terrorism Act (PTA) is yet to be repealed, while continuing use of torture to extract confessions is widely reported. Complete elimination of this dreadful practice from Sri Lanka needs leadership from the government which is solely lacking.

The government has utterly failed to engage the majority Sinhala community about the need for true reconciliation and the indispensability of transitional justice to achieve that. In fact, a consistent narrative articulating the above and the need for ending the culture of impunity is absent in the political discourse of the country. If Sri Lanka is to enter a new era of respect for rule-of-law and good governance, resolute and consistent efforts are imperative.

Though the GTF commends Sri Lankan Government for allowing external scrutiny of the human rights situation by facilitating visits by various UNHRC Special Rapporteurs, their assessments and reports are unsurprisingly scathing. The latest (July 14, 2017) is from Ben Emmerson, the U.N. Special Rapporteur on Human Rights and Counter-Terrorism, who told reporters at the conclusion of a four-day visit: “There is little evidence that perpetrators of war crimes committed by members of the Sri Lankan armed forces are being brought to justice,”… … “None of the measures so far adopted to fulfil Sri Lanka’s transitional justice commitments are adequate to ensure real progress” … … and progress on meeting commitments made under a 2015 U.N. Resolution have ground “to a virtual halt.”

A report tabled at the 35th session of the UNHRC (May 2017) by the UN Special Rapporteur on the Independence of Judges and Lawyers, Diego García-Sayán, was again highly critical of the Sri Lankan justice system. The report identified ‘continuation of a normative framework based on PTA’, ‘persisting impunity for any abuses committed by the police or the security forces’ and ‘the lack of effective victim and witness protection’ as key areas where urgent action was needed. Both Special Rapporteurs concluded that it was the Tamil community that was at the receiving end, disproportionately.

Various statements released by International Crisis Group (ICG), Human Rights Watch, Amnesty International and the International Truth and Justice Project during the last six months also concur with the findings and sentiments expressed by the UN Special Rapporteurs. Clearly stating that Sri Lanka is faltering on its commitments made to its own people as well as to the international community, these institutions have called for re-energising the process of addressing the war’s legacy.

The latest report from the ICG (July 28) highlighted the plight of the Tamil speaking women in the North and East, stating that these women “have been marginalised during the transitional justice process” and called on the government to act “promptly by establishing the offices on missing persons and reparations” to prevent the emergence of “renewed grievance that damage already slim hopes of reconciliation among communities, and between the state and its Tamil citizens.”

GTF calls upon the International Community and the Government of Sri Lanka to take serious note of the impartial assessments made by such eminent organisations and mandate holders, and to recognise that Sri Lanka is truly in danger of losing the momentum in addressing the accountability issues that are critically important at this juncture. The Tamils are seeing the same old political dynamics that has plagued Sri Lanka since Independence and are understandably becoming cynical of the Government. For our part, the GTF would like to reaffirm its commitment to assist in any meaningful initiatives to arrest this dangerous trend.

It is essential that Sri Lanka take urgent concrete measures that will assure confidence to all its people, and most importantly to the victims, that achieving justice that has been denied for so long is possible.