Sri lanka Govt. thugs attack street drama troupe; This is not a democracy but a ‘thugcracy’ 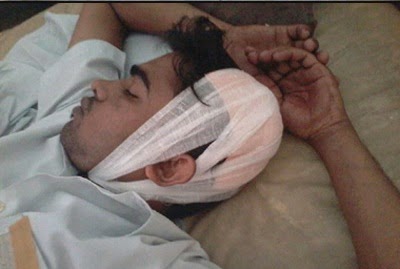 A gang of government thugs attacked the street drama group of the Society for Socialist Art of the JVP performing at the bus stand at Panadura a few moments ago. The street drama group was performing at the bus stand to apprise the public regarding the situation in the country when government thugs attacked the performers with iron bars. Nine members of the drama troupe who were injured in the attack have been admitted to Panadura General Hospital while the condition of three of them is serious say hospital sources.
A complaint has been lodged at Panadura Police regarding the attack. The attackers have been identified as a group led by security personnel of the bus stand. The organizers of the street drama have informed the police regarding the perpetrators

This is not a democracy but a ‘thugcracy’, thug dramas’ performed beside Street Dramas – Artistes

This country has been turned not into a democracy but a ‘thugcracy’ says Senior Lecturer Chandraguptha Thenuwara. While a ‘Geneva’ drama is being playacted in the country ‘thug dramas’ too are being played said Mr. Thenuwara.
He said this at a press conference held at the Center for Society and Religion at Maradana yesterday to protest against the thug attack on the street drama troupe of the Society for Socialist Art of the Socialist Youth Union.
“Today thugs volunteer to engage in violence on behalf of the government but the same thugs get killed ‘trying to show weapons’. This is what we call ‘thugcracy’.
I don’t like the word ‘artiste’. For, today the word ‘artiste’ is used for those ‘sensitive performers’ who wait to catch crumbs thrown from government’s table. Today, genuine artistes do not have an opportunity to express their thoughts. Where John de Silva Arts Theater was has been turned into a car park. The Arts Theatre has become an eating place.
Street dramas, ‘Kolam’ are forms of theatrical performances and presentations in outdoor public spaces without a specific paying audience. These creations are satirical where human vice or folly is attacked through irony, derision, or wit. There is no democracy in a country if people are unable to respect others’ views or tolerate them. Today, any deceitful or violent act could be carried out using President’s name. The question is who does the police that are paid from our tax money serve,” said Mr. Thenuwara.
Street drama artist Deepani Silva, who was deeply affected due to the thug attack on the street drama troupe said, “I was in Mr. Gamini Haththotuwagama’s street drama troupe. I was deeply moved when I heard the artists of the street drama troupe were attacked by thugs. For, I have been in this sector for more than forty years. Street dramas are a kind of creations that are performed without charging any money. Street drama artists do not receive anything in return. They perform under very trying conditions. Attacking and assaulting artistes is a mean and a savage act.”
Winnie Hettigoda addressing the media said today those who trade oil unhealthy for people and magicians have freedom on the street but street drama artists do not have that freedom. The rulers have destroyed the country for 66 years and masses who like or dislike aesthetics should act with this in mind said Mr. Hettigoda.
Mr. Susil Wickremesinghe said any creation that doesn’t have politics in it is not art. Genuine politicians should be able to respect and enjoy a piece of art. Those politicians who cannot appreciate art are politicians with petty interests said Mr. Wickremesinghe and added, “Time has come to change this wretched society and as artistes we should make our maximum contribution to make such a change. We call upon all masses to rally against the barbarism that exists in the country at present.”
Buddhika Damayantha, Sunil Chandrasiri also spoke while Anura Srinath, Sdesha Mohotti and Premaratna Tennekone were present.