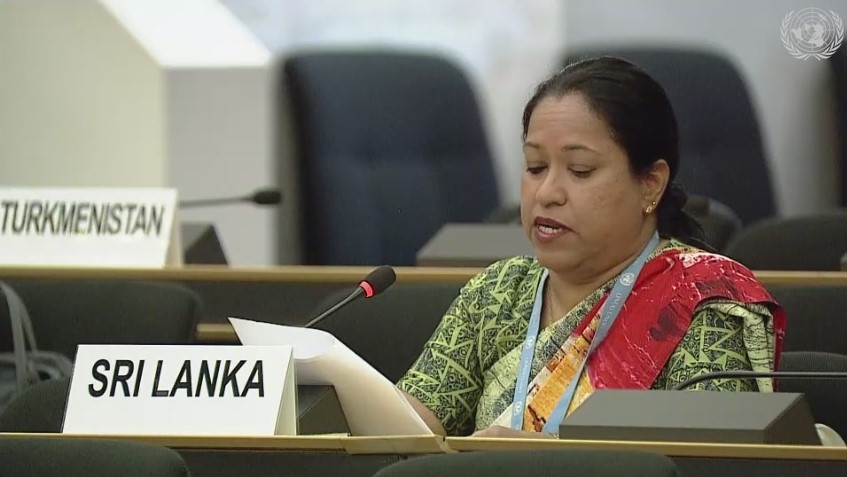 The Statement made by Sri Lanka at the interactive dialogue with Special Rapporteur on the Right to Freedom of Assembly and of Association.

Sri Lanka thanks Mr. Clément Nyaletsossi Voule, Special Rapporteur on the rights to freedom of peaceful assembly and of association for the report on his visit to Sri Lanka from 18-26 July 2019 (A/HRC/44/50/Add.1). The Government of Sri Lanka shared its comments on the contents of the Special Rapporteur’s advanced unedited report, some of which have been incorporated into the final version that has been presented today. At this interactive dialogue, we wish to share some further comments on matters contained in the report, and provide updates where available.

We take note of the recognition in the report, of Sri Lanka’s “particular circumstances as a post-conflict and multi-ethnic society”, and the Special Rapporteur’s condolences to the victims of the Easter Sunday terrorist attacks.

The facilitation of the Special Rapporteur’s visit, even as the country was grappling with challenges associated with a new manifestation of terrorism, demonstrates Sri Lanka’s commitment to continue its constructive engagement with UN human rights mechanisms. The visit of the Special Rapporteur was among the 9 country visits undertaken by Special Procedure Mandate Holders on different thematic mandates to Sri Lanka in the past 5 years, and we remain committed to fostering this cooperative dialogue.

Sri Lanka concurs with the Special Rapporteur that the rights to peaceful assembly and association are essential for the full realization of democracy. The longstanding importance guaranteed to these rights is evidenced by the Constitution of Sri Lanka. The trade union movement in Sri Lanka dates back to the early 1900s and has been a pivotal driver in not only safeguarding workers’ rights to assembly and association but also in the struggle for democracy in the 1930s and 1940s amidst restrictions imposed by colonial rulers.

Today, these rights have been guaranteed under Article 14 of the Constitution, and are subject only to the limitations recognized by the International Covenant on Civil and Political Rights (ICCPR) and the exceptional grounds set out under Article 15 of the Constitution. The rich jurisprudence of decisions by the Supreme Court of Sri Lanka on Article 14 indicates how the Sri Lankan judiciary has consistently upheld the rights to peaceful assembly and association as a justiciable fundamental right. The protests, demonstrations and other forms of assembly and association by different groups, which one witnesses in the country, show how these rights are being enjoyed by the people, in Sri Lanka’s vibrant democratic process.

These constitutional rights have been exercised across the Sri Lankan society, including by human rights activists, other civil society actors, university students as well as trade unions. It may be noted that the Industrial Disputes (Amendment) Act No 56 of 1999, which provided for prohibition of unfair labour practices by employers, sets out that No employer shall –

(a)   Require a workman to join, or refrain from joining, any trade union, or to withdraw from, or to refrain from withdrawing from, his membership of a trade union of which he is a member, as a condition of his employment;

(b)   Dismiss a workman by reason only of his membership of a trade union or of his engaging in trade union activities;

(c)   Give any inducement or promise to a workman for the purpose of preventing him from becoming, or continuing to be, a member, office bearer or representative of a trade union;

(d)   Prevent a workman from

(ii)   Supporting a trade union, by financial or other means;

(e)   Interfere with the conduct of the activities of a trade union;

(f)     Dismiss, or otherwise take disciplinary action against, any workman or office bearer of a trade union;

(i)     For a statement made by such workman or office bearer in good faith before any tribunal or person in authority; or

(ii)    For any statement regarding acts or omission of the employer relating to the terms and conditions of employment, of the members of such trade union made by such workman or office bearer, in pursuance of an industrial dispute for the purpose of securing redress or amelioration of working conditions of such members;

A key challenge for democratic, rules-based societies lies in their ability to strike an equitable balance between competing human rights. Therefore, just as the rights to peaceful assembly and association are vital, it is equally important that they are exercised responsibly, in a manner that does not violate the rights of other persons or groups. It is this key consideration, which, in our view, underpins the restrictions on assembly/association in Articles 21 and 22 of the ICCPR, namely, “in the interests of national security or public safety, public order (ordre public), the protection of public health or morals or the protection of the rights and freedoms of others”. It is this same consideration that forms the basis for limitations to these rights under the Sri Lankan Constitution, including in the interests of ‘racial or religious harmony’ and ‘national economy’, particularly as a multi-ethnic and multi-religious developing nation.

The Government of Sri Lanka has strived to ensure that these limitations on the rights to peaceful assembly and association are applied in line with the principles of legality, necessity and proportionality:

–        The Emergency Regulations which were promulgated soon after the Easter Sunday terrorist attacks, in accordance with applicable law, were lifted as soon as the circumstances which warranted their extension ceased to exist. We acknowledge that the Special Rapporteur has recognised the “legitimate need to protect the nation from terrorist attacks”, and wish to update that the persons arrested under these Regulations were expeditiously investigated and either released or directed to appropriate legal processes.

–        With regard to registration of Non-Governmental Organisations (NGOs), we wish to note that the requirements relating to registration are intended to balance the Government’s commitment to safeguarding freedom of association, with legitimate national security interests. It is noteworthy that investigations conducted in the aftermath of the Easter Sunday attacks have indicated the possibility of terrorists abusing an unregulated process to transfer funds for their activities/organizations.

–        As for the declaration of some public services as essential, it must be noted that these legal provisions have been used by the Government only in instances where certain trade union action posed an imminent threat to the rights of the general public, as provided for by the ICCPR as well. We wish to highlight that this law has been used only twice in the recent past, when continued strike action by transport service employees threatened the basic human rights of a larger segment of the population.

–        The requirement for notification referred to in the Special Rapporteur’s report applies only to processions, with a view to managing the possible obstruction of public roads and consequent disruption of public life that it may cause, particularly during rush hours. Since February this year, the Government has allocated a dedicated land space in the heart of the capital for people to carry out their protests or assemblies with least disruption to the day to day lives of the rest of the population.

–        As noted by the Special Rapporteur in his report, the Department of Police, in 2016, has issued clear Orders to the police force that measures to disperse unlawful assemblies should be lawful, proportionate and purely for the purpose of maintaining law and order and protecting the society. Use of force has been permitted only as the last possible resort, to be exercised strictly according to stipulated laws and guidelines, in a manner that does not infringe upon the fundamental rights of the people. Members of the police receive regular training in this regard as part of their human rights training programmes. The Government will work towards ensuring the full implementation of these Orders, while also ensuring that errant officers are made accountable according to due process of the law.

With reference to reports of alleged surveillance and intimidation, we would like to reiterate our invitation to the parties concerned to make formal complaints to law enforcement authorities or to independent national institutions such as the Human Rights Commission of Sri Lanka or the National Police Commission, so that action can be taken to investigate the alleged incidents. The Government remains committed to protecting and promoting civil society space, and ensuring that complaints received on alleged intimidation are investigated and prosecuted.

It is also reiterated that, apart from operating routine security networks in the interest of national security, particularly after the devastating Easter Sunday terrorist attacks, the Security Forces and intelligence agencies are not engaged in monitoring any specific group of people in the country. We believe for any country, compromising its national security interests amidst looming sophistication of strategies of radical and extreme elements world around, is bound to face regrettable consequences. Hence, the GoSL requests the Special Rapporteur to be mindful of that stark reality when making recommendations related to security sector reforms.

Steps will be taken to address concerns related to alleged harassment of religious minorities and to safeguard persons of all faiths. In this respect, an amendment to the Penal Code is under consideration to prevent hate speech and incitement of hatred among communities through mainstream and social media.

In conclusion, Mr. Vice President, Sri Lanka would like to restate its commitment to remaining engaged with the Special Rapporteur on peaceful assembly and of association as well as other Special Procedure Mandate Holders of this Council in an open and constructive manner, in line with our domestic policies and priorities.