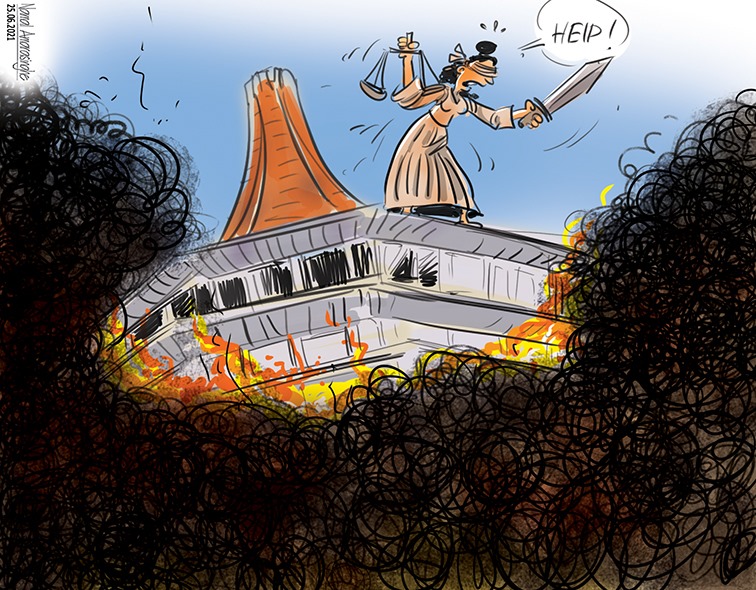 Stirring scenes of Sri Lanka’s ancient grandeur in the backdrop of President Gotabaya Rajapaksa’s speech to a nation in tumult this Friday does not minimise the frightening disconnect between perception and reality that emerged from what the President thought it fit to speak (or rather, fulminated) about.

Centre will not hold, it cannot hold in the face of this most grievous crisis that the nation has faced since independence. That our farmers know and realise. It is up to the nation’s leadership to understand that fact.

This must surely concern all Sri Lankans, even those who voted with eyes criminally wide open to bestow a two-thirds majority  on this Presidency and Government in 2019 and 2020.

For one must concede, it takes special panache to announce, as the President did, that the Government has ‘successfully contained the underworld’ and that ‘the drug menace has been largely brought under control’ on the very day after he pardons a notorious druglord who was convicted of murder ‘in broad daylight’ by Sri Lanka’s apex court.

As irrepressible satirists depicted the Supreme Court in flames with a blindfolded Lady Justice atop shouting ‘help’ and a President wielding a sword decapitating the scales of justice, the Bar Association of Sri Lanka called for clarification on whether legally mandated procedures had been followed in the conferring of this pardon. Constitutionally, a report must be called for from the judge/judges who tried the case which must be forwarded to the Attorney General for advice. Thereafter, the report together with the advice must be sent to the Minister of Justice who is called upon by the proviso to Article 34(1), to forward the report together with his/her recommendation to the President.

These are procedures that have been observed in the breach since Sri Lanka’s Constitution was enacted in 1978. Typically Presidents exercise these powers with no constraints as was the case in recent years when former President Maithripala Sirisena exercised his powers to pardon (a murderer again) and the incumbent President pardoned a soldier convicted for the massacre of Tamil civilians last year. Importantly the Bar’s warning that while the presidential power to pardon is constitutional, it cannot be wielded arbitrarily speaks to Presidential vulnerability under the 20th Amendment to fundamental rights challenge of his actions.

This is a feature of the precedent 19th Amendment (Article 35) that was continued in its successor after a furious struggle in 2020. That said and veritably so, the Bar’s bite must equal its bark in exercising the constitutional scrutiny of presidential actions. In other words, it cannot release a statement calling for accountability of the President’s actions and stop at that. The courts must not be reduced to the status of stunned bystanders in these cases. Regardless, if we may proceed beyond the uncertain vagaries of the law for a moment, what is of larger concern is the palpable disconnect that permeated almost every aspect of Friday’s Presidential speech.

This was a President who appeared to believe what he was saying which made the whole even more profusely anxiety-ridden. Certainly he may be credited with his claim that ‘justice’ had been done in following rules of seniority in the appointments/promotions of judges and the new Attorney General. But in almost every other aspect, what stood out was the grim contradiction between what was presidentially articulated and the reality confronting the Sri Lankan citizenry. To proclaim that members of all communities and people belonging to different religions’ are living ‘with dignity without causing harm to others, while preserving their identities’ when the contrary is evidenced with extreme ethnocentric if not xenophobic forces at play, is unbelievable.

Meanwhile the President’s injunction that we must ‘gradually ‘increase the use of organic fertilizers is something that few would argue about. Yet as crooks with ties to Government politicians hoard fertiliser needed for the current harvests for profit, farmers join hands to shout that they need fertiliser, ‘any type of fertiliser.’ Some cry that they will commit suicide and others eat pathetically malnourished stalks of vegetation to show their plight whilst screaming that starvation will soon ensure. All this defeats the promise to ensure ‘food security’ let alone ‘revive’ the agricultural sector.’

A chain of causation that must be recognised

Thus too is the boast regarding ‘tens of thousands of schools have been provided with fiber optics internet connections’ when schoolchildren are literally climbing trees and roofs of houses to get connectivity to study. Even so, to actually understand the problem that is before us, there is a chain of causation that has to be traced. Simply put, the electoral results of 2019 and 2020 sweeping a military official to the high seat of the Presidency would have been inconceivable absent catastrophic convulsions during 2015-2019.

As we may recall, those colossal failures range from clumsily manipulated constitutional reforms to compromised corruption inquiries betrayed by the very ‘crusaders’ involved in that process and so-called transitional justice mechanisms that went nowhere. So when former President Maithripala Sirisena and former Prime Minister Ranil Wickremesinghe rise in their seats in the House to pontificate on where things have gone wrong and how it may be set to right, they may remember their part in this cataclysmic process, the final catastrophic stages of which we see now.

Indeed as echoes of Friday’s speech ring in our ears, there are unmistakable precedents that come to mind. Just as much as the exultant promise of former President Maithripala Sirisena’s swearing into office as the sixth President of Sri Lanka at Independence Square on  January 9th 2015 was betrayed by both himself and his Prime Minister Ranil Wickremesinghe not long thereafter , the pugnacious tone and tenor of President Rajapaksa’s address this Friday reveals more than what is said. When the President complains bitterly that, ‘the truth is being overshadowed by lies,’ that tells a tall tale.

Listen to the public roar of anger

This was not a happy marking of milestones on a Presidential journey. Rather, it was a recitation of woes and evident fury at those whom the President castigated as ‘some people’ who were ‘angry with the government for not fulfilling their personal demands.‘ But the loud roar of anger arising from the populace, ranging from farmers to fishermen, from the poor at the margins of society facing near starvation to city denizens deprived of their due doses of vaccinations due to politicisation of the process, cannot just be relegated to ‘some people.’

These are not a ‘few’ that the President casually referred to on Friday as criticizing the Government in order to discredit it but rather, the near totality of the public ranging the length and breadth of the land from afflicted fishermen of Mullaitivu, Chilaw and Negombo to enraged vegetable farmers of Bandarawela and paddy cultivators of Hambantota.  What they are asking is for the President of Sri Lanka to listen to their agonised voices, not to categorise them in the ranks of the politically disaffected. Ironically, these comprised the very electoral mass that brought this Presidency and this Government into power on an enormous mandate deprived to earlier rulers.

That the Presidential ear is so resolutely turned away from their pleas is not reassuring. Indeed, we may look to Yeats for his ruminations on the best lacking all conviction ‘while the worst are full of passionate intensity’ at yet another time of disease, conflict and death (1918-1919 flu pandemic). For as he warned, only unprecedented anarchy will follow when ‘… the blood-dimmed tide is loosed.’  This is a warning that the nation’s grievously afflicted people and Sri Lanka’s leadership will learn to their cost. Lives are lost and a few hundred thousand more lives potentially are at stake, variously due to the mismanaged handling of a global pandemic or starvation as the case may be.

For the Centre will not hold, it cannot hold in the face of this most grievous crisis that the nation has faced since independence. That our farmers know and realise. It is up to the nation’s leadership to understand that fact.

(Sunday Times – Justice in flames and a president’s grievous paradoxes)