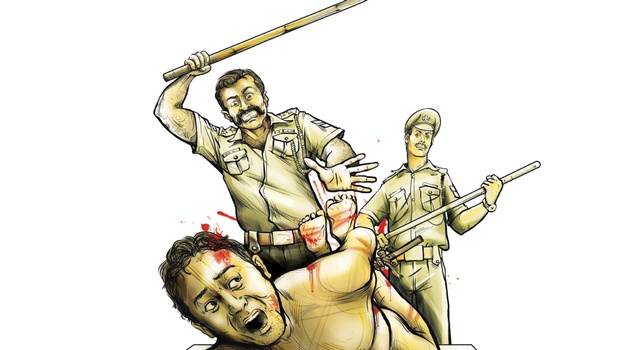 (AHRC) 14-year-old Kahingala Waduge Kanidu Minsara Silva, who was illegally arrested, detained and tortured by the Moratuwa Police Station on 10 October 2017. Minsara is a student at Uyana Kanishta Vidyalaya. On October 8, he had a non-violent dispute with a senior student, after which, Minsara was called to the police station and tortured. After he was produced in court, the Magistrate ordered a medical report and the police to investigate. Until now however, no investigation has been conducted.

On 8 October 2017 Minsara participated in a religious pageant organized by the Buddhist Temple of the village to celebrate the end of Buddhist monks’ raining season precepts (‘Katina’ Perahera). While the pageant was proceeding, Minsara had a small dispute with a fellow school student of the upper class. After the pageant ended, Minsara went home.

On October 10, Priyantha received a police message to appear before the Officer-in-Charge (OIC) of the Moratuwa Police Station, along with his son Minsara. When he questioned the police officer for the reason, he simply stated that they needed to record a statement. At 3:30 p.m., both the son and father went to the police station. Inside the police station they observed that the parents of the upper class student along with a local politician were also present, talking to the senior police officers.

The police officers called both parties for an inquiry before the OIC. The OIC questioned the parties for the dispute among the children. Then he suddenly informed Priyantha that they are arresting his son and later producing him before the Moratuwa Magistrate’s Court. Shocked, Priyantha pleaded with the officer that his son is innocent, and a minor. He further explained that although the children have a dispute, it was not violent or with any damages. However, the OIC insisted that Minsara needed to be arrested, detained and will be produced before the magistrate only on the next day. Later Priyantha left the police station while Minsara was crying. Priyantha wanted to consult an attorney-at-law.

At 5:30 p.m., Priyantha received a telephone call from an unknown number, and his son Minsara pleaded with him to come to the police station as he is in fear of his life. He was crying continuously. Priyantha again visited the police station, where Minsara informed him that, with the help of a woman visitor, he called him. Minsara explained that he was tortured by the police officer who took him to the rear of the police compound. Minsara narrated that, the officer first came with uniform and then later came in civilian clothes. Then he was beaten with fists and kicks. When Minsara fell down, the officer kicked his chest three times. Minsara clearly mentioned that while being tortured, the officer was blaming him for having a dispute with the other child. The torturer never questioned him for any information. It was clearly for revenge taking and proved as a punishment.

On October11, Minsara was produced before the Moratuwa Magistrate’s Court in case no. B/1667/17. His lawyer, Manoj R Gamage, appeared before the Magistrate and explained that the child was tortured, and the circumstances of the torture. When Minsara was questioned, he was still suffering from chest pain.

The Magistrate questioned the police for the identities of the individual officers responsible for this kind of torture to a child. Later, the Magistrate granted bail to Minsara and ordered the Judicial Medical Officer of the Panadura Base Hospital to examine the child and report to the court on his medical condition.

( Above cartoon courtesy of the Indian Express)