Sri Lanka: Former ministers admit to killing those who surrendered to the Army (video) 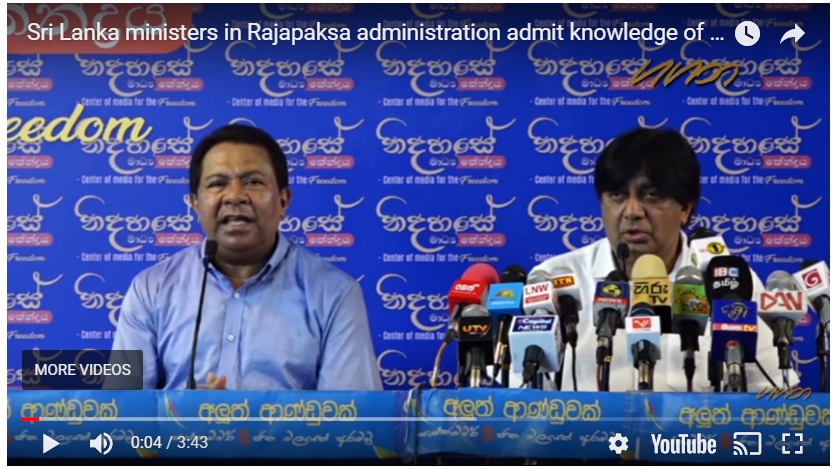 Two former ministers who served during the Rajapaksa regime have admitted that LTTE members including Tamils who had surrendered to the Army had been killed.

This allegation has been levelled against the Sri Lankan security forces for almost ten years by the war affected Tamil including the Diaspora and the international Human Rights Organisations, and the charge was accepted by two former ministers who are working hard towards the unification of the Maithripala and Mahinda factions.

“There are some whom we know as well, who surrendered, but they were killed,” former Higher Education Minister S.B Dissanayake had told the media in Colombo. He had said that the LTTE Ampara and Batticaloa leader Ramesh had been killed subsequent to surrendering to the Army.

After Vinayagamoorthi Muralitharan alias Karuna left the LTTE and decided to support the Army, the Ampara, Batticaloa operations were handed over by the LTTE to Thambirajah Thurairajasingham.

Known as Colonel Ramesh, he had notified Minister SB by phone just ten minutes prior to surrendering to the Army, Dissanayake revealed. “Ramesh surrendered and he was killed. There are such things,” he said in a lighter vein.

The government dismissed the Channel Four video footage of Ramesh while alive being questioned by the Army and later being killed, as being fake.

This video published with this report shows Ramesh being questioned and according what the soldiers say it’s the 22nd. However, the Sri Lankan Government declared the end of the war as May 19, 2009.

The government claimed that LTTE Political wing head Balasingham Nadesan and Peace Secretariat Head Seevaratnam Pulidevan had died during the war and have failed to investigate reliable evidence that they had been killed after they had surrendered holding white flags.

The former minister had also indicated about the two of them. “There is another group whom none of us talk about. We know very well that they died after they surrendered. You and us, both know it.”

Former Minister Dilan Perera who had also come to where Dissnayake was had also admitted that unarmed Tamil civilians were killed during the war.

He laid the blame of the then Army Commander Sarath Fonseka.