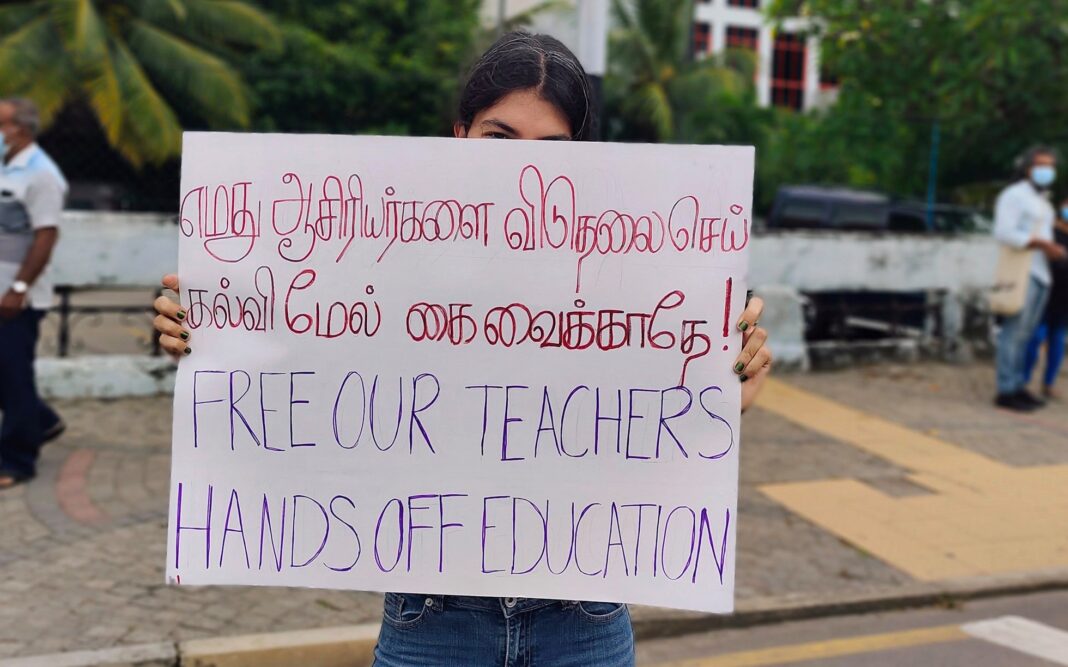 The Ceylon Teacher Services Union (CTSU) announced on Sunday that it would refrain from conducting online teaching practices from Monday (yesterday) to protest against the Government’s move to forcibly direct Ceylon Teachers’ Union (CTU) General Secretary Joseph Stalin and several others to be quarantined after being released on bail and until providing a solution for online teaching.

Meanwhile, National Trade Union Centre (NTUC) Chairman K.D. Lal Kantha warned on Sunday that the trade unions and civil organisations would resort to a joint trade union action if all the protesters including Joseph Stalin and Politburo member of the Frontline Socialist Party (FSP), Duminda Nagamuwa, who were sent to quarantine, were not released after PCR tests conducted on them by Tuesday (today).

With these trade union actions and the threats of further such actions it is clear that the government would face an embarrassing situation. If the government backtracked on its suppressive action against the trade union leaders, it would be deemed a defeat on the part of it. On the other hand if the government took tougher stand on the issue, there is a possibility of education of the students who have already hit hard by the COVID-19 pandemic collapsing totally while the essential services are being disrupted.

This is an utterly unnecessary situation created by the authorities, especially the police by acting highhandedly, in respect of trade union actions. Joseph Starlin an internationally known trade union personality and other trade activists who had been forcibly taken to Mullaithivu to be quarantined after they demonstrated against the proposed General Sir John Kotelawala National Defence University Bill on July 8. What would have happened had the trade union agitation been allowed to go ahead? They would have chanted slogans for an hour or two and dispersed. There were no signs of the agitation taking a violent turn, neither were they seemed breaching health instructions, i.e. those pertaining to wearing masks and maintaining social distancing.

The police, when dealing with these demonstrators had acted upon a communication by the Director General of Health Services (DGHS) to curb demonstrations which seems to be illogical in the light of him having drastically relaxed restrictions imposed on the public earlier, in view of the third wave of COVID-19 in Sri Lanka, which was evident since the Sinhala and Hindu New Year in April.

Even Spas are allowed to function now while TV channels are showing the congestion in buses and trains to which the authorities are turning a blind eye, in spite of various new variants of coronavirus have been detected in the country.

Quarantine is a measure aimed at minimising spread of diseases and not a means of punishment or detention. There must be a basis which should be logical and reasonable for one to be isolated or quarantined from the other members of the society. There should have been people infected with coronavirus or their contact persons among the demonstrators for them to be quarantined. Hence, the crackdown on the trade union leaders and activists seems to have contravened several fundamental rights of those who have forcibly detained enshrined in the Sri Lankan Constitution and the Universal Declaration of Human Rights.

UN resident coordinator in Sri Lanka, Hanaa Singer-Hamdy and the Bar Association of Sri Lanka have already expressed concern over the arrest and “quarantining” of these trade union activists. These things happen at a time when Sri Lanka’s human rights situation has come under a renewed spotlight of the UNHRC and European Union, risking even the GSP+ concessions for the country. This is a good case in point where officials have put the government leaders in difficulty just to earn brownie points from the same leaders. Now the government must have a pragmatic approach rather than an egoistic one, in order to find a way out.