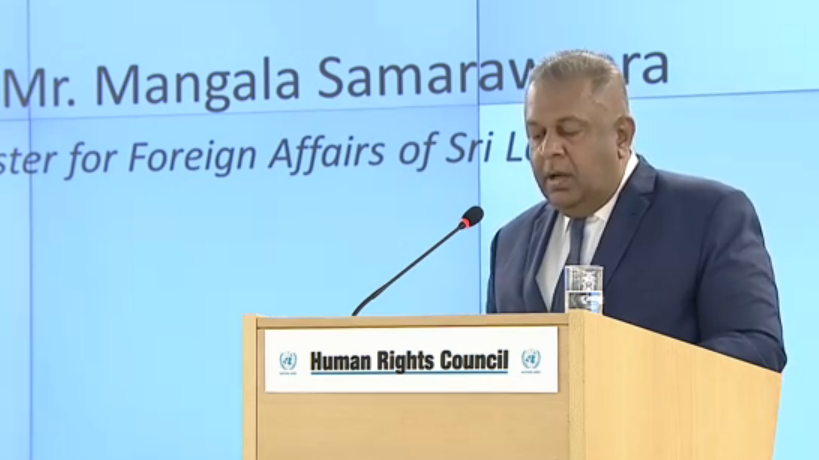 Statement by Foreign Minister Mangala Samaraweera at the High Level Segment of the 34th Session of the Human Rights Council.

It is an honour for me to be here today at the 34th Session of the UN Human Rights Council which I believe has the highest number of dignitaries in attendance.

I stand here today at a time when the very basis and fundamentals of human rights are being questioned around the world. Many of the universal values that we subscribe to are being challenged in the name of ‘populism’, with populists spinning webs from threads of ignorance. The role of this Organisation, in this context, is becoming more important than ever.

This Council is familiar with Sri Lanka’s story. After years of denial, disengagement, and self-isolation, the National Unity Government of President Maithripala Sirisena and Prime Minister Ranil Wickremesinghe, proceeded to set our country on a transformative trajectory in terms of human rights, good governance, rule of law, justice, reconciliation and economic development.

The people of our country voted in large numbers granting a resounding victory to President Sirisena at the election in January 2015. The voter turnout was the highest recorded for any Presidential candidate, and in the North and the East, President Sirisena’s share of the vote was also the highest ever as people placed their trust in President Sirisena who they believe will not short change them as in the past. Therefore, we not only owe the people who voted for us 2 years ago, but also to history to uphold that trust, and we are committed to do so.

It is with this firm conviction, that soon after the August 2015 Parliamentary Election, we co-sponsored Resolution 30/1 titled ‘Promoting Reconciliation and Accountability in Sri Lanka’, which was adopted unanimously by this Council, on the 1st of October 2015.

I speak today, just over a year, or 15 months since Sri Lanka took the historic step of co-sponsoring Resolution 30/1. Many in our country criticised and continue to criticise us for this step. Some even see this as an act of treachery and betrayal of the nation. We have a simple message for them, as we journey towards 2018, our 70th year as an Independent Nation:

The Sinhalese, the Tamils, the Muslims, the Burghers, those of different faiths and beliefs, across gender, caste and creed, that constitute our country, worked together to gain Independence for our nation in 1948. That achieved, we failed to forge the perfect nation of individuals who all hold equal rights, working as one to achieve the heights our nation could attain. As a result, for 69 long years, we journeyed through pain, violence, loss of life and precious human resources, ruining chances of socio economic progress. This was clearly an experiment in nation building that failed, which is certainly not worth pursuing further. We must have the courage to acknowledge that truth, and that era must now end. The Sri Lanka that we seek to build here onwards, should be one where justice reigns; where human rights are valued; where every individual’s dignity is upheld; and where civil society and the media play their due role; a society that believes in the importance of the independence of the judiciary, and the rule of law; and where everyone has equal rights.

As we move forward in this journey, the forces of extremism and regression on both sides of the divide are creating road blocks for narrow, short-term political gain. While stubbornly refusing to acknowledge any of the far-reaching gains we have made in the last 2 years, they argue that we have either done too much or too little. I would, in this backdrop, like to say that the recommendation of the GSP+ concessions from Brussels, and MCC compact assistance from USA were announced recently, in recognition of the progress made in Sri Lanka in the last two years, and we await their formal approval in the coming months.

– legislation to give effect to the International Convention for the Protection of All Persons from Enforced Disappearance was approved by the Cabinet of Ministers, and published in the Government Gazette, and is expected to be tabled in Parliament shortly;

– the formulation of the Policy and Legal Framework of the proposed Counter Terrorism Act has progressed in keeping with accepted international practices;

– Sri Lanka’s Parliament has enacted legislation to establish a Permanent Office on Missing Persons. The Act that has been certified by the Speaker of Parliament, is now the law of the land, and awaits the assignment of the subject, for its operationalisation. The budget for the year 2017 has, in the interim, allocated over a billion Rupees for this

-National Policy on Durable Solutions for Conflict-affected Displacement was approved by the Cabinet of Ministers;

– the Registration of Deaths (Temporary Provisions) Act No 19 of 2010 was amended by Parliament, and the issuance of Certificates of Absence was enabled;

-the UN Secretary-General at the time, Mr. Ban Ki-moon, and the Special Rapporteur on Minority Issues visited the country, at the invitation of the Government;

-the List of Designated Persons under Regulation 4(7) of the UN Regulation No. 1 of 2012 was further amended;

– the Reports of the 6 Sub Committees of the Steering Committee tasked with deliberating and submitting reports on fundamental rights; judiciary; law and order; public finance; public service; and centre-periphery relations; have been completed, and handed over to the Constitutional Assembly;

– the National Human Rights Action Plan for the period 2017-2021, evolved through a wide consultative process, was approved by the Cabinet of Ministers;

– the first ever National Integration and Reconciliation Week was observed from 8th to 14th January 2017, with all public officials as well as school children taking a pledge, resolving to work together, hand in hand, respecting the richness of our diversity, to foster peace, understanding, and mutual trust, for a new Sri Lanka that is united in its diversity;

Another important undertaking that was successfully concluded during this period, is public consultations carried out by the Consultation Task Force on Reconciliation Mechanisms, the first of this nature carried out in the country. Over 7000 written submissions were received from persons from all walks of life, many of them victims of human rights violations who came forward to give their views. The Report of the Task Force is presently being studied in the context of designing the relevant Mechanisms for Truth-seeking, Reparations, Justice, and other reconciliation processes.

We expect the draft legislation on the Truth-Seeking Commission to be presented to the Cabinet of Ministers within the next two months. Our resolve to bring justice to the victims of human rights violations remains firm.

While taking the allegations of continuing incidence of torture seriously, it is reiterated that the Government maintains a zero-tolerance policy towards torture as also demonstrated by the President’s participation against torture last year. Although the National Human Rights Commission has recently indicated to us that there is a downward spiral of incidents, even one incident of torture is one too many. The Human Rights Commission of Sri Lanka, the Police Commission, the Ministry of Law & Order and other relevant agencies are working together to prevent and combat torture. As in many other areas, this too is an area in which we require technical assistance, and I hope that countries with experience in this area will come to our assistance.

The Constitution drafting process is for us both central and essential not only for democratisation, but also for ensuring non-recurrence of conflict. As this Council is aware, the Parliament of Sri Lanka, in April 2016, unanimously adopted a Resolution to prepare a draft Constitutional Bill for the consideration of Parliament. As we approach the 70th year of our nation’s Independence, we seek, for the first time in our country’s modern history, to engage in this process wholeheartedly as an exercise that would unite our people who have been divided for far too long. The Parliamentary process and referendum are for us, imperative. We want to ensure that this Constitution, the 3rd Republican Constitution, unlike those before, that did not involve consensual and consultative processes, would reflect the true aspirations of our people. An exercise where, after years of conflict, the executive, legislature and sovereign – that is the people of our country – will unite to define and chart our nation’s future, guaranteeing equal rights, justice, and dignity for all citizens, honouring the multi-ethnic, multi-religious, multi-lingual character of our nation, upholding the right of citizens to participate more fully in decisions that impact their lives, and guaranteeing non-recurrence of conflict.

The journey we have undertaken, arising from our commitments to our people and the mandates received at elections, is challenging. This may be a journey strewn with both success as well as some setbacks. In the face of roadblocks and other obstacles in the day to day world of realpolitik, there may have to be detours from time to time, but the destination and our resolve to walk the distance will remain unchanged. Our resolve to see the transitional justice process through, has not diminished. With the help of all our citizens in all walks of life, our friends and partners in the international community, and Sri Lankans overseas; with patience, understanding, and constant and consistent effort and perseverance; we strongly believe that we can make the reconciliation process a success, and establish a progressive and united society, working in harmony to take our nation towards new heights of socio-economic development. We believe that we can make Sri Lanka a shining example of a country that is prosperous, united in its diversity, upholding human rights, justice, and the rule of law.