Sri Lanka: families of the disappeared face police harassment on the UN Day of the Victims of Enforced Disappearances – Ruki Fernando 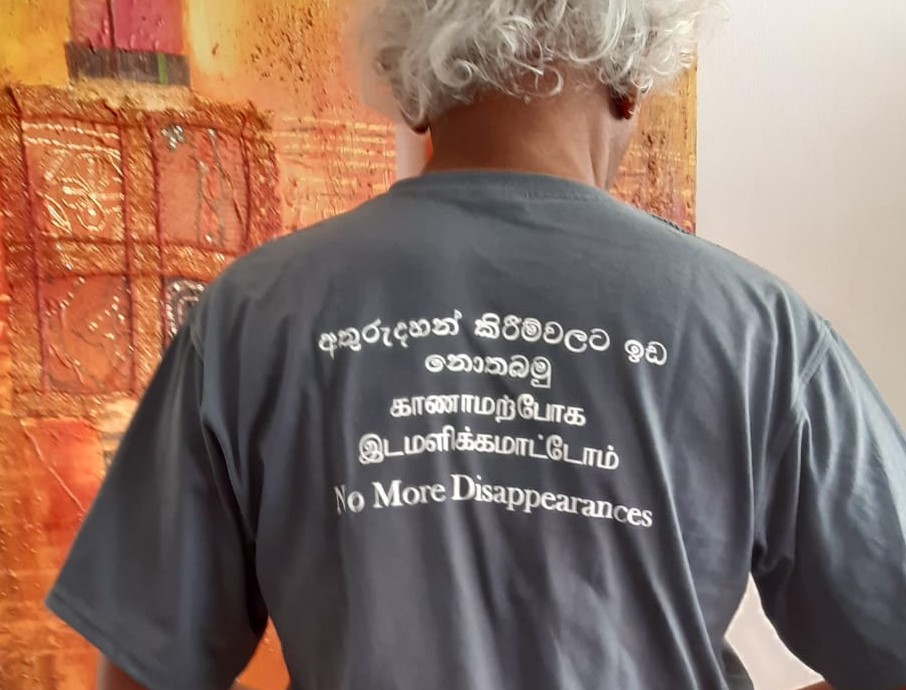 In different parts of Sri Lanka, families of the disappeared came together to hold events to commemorate the UN Day of the Victims of Enforced Disappearances on August 30. In Digana (Central province), families held a fair at a Catholic church. In Jaffna (Northern province), families from across the North joined a protest march. In Batticaloa (Eastern province), families from the East staged a protest march across the town. The day before, families of the disappeared in Vavuniya (Northern province) had religious observances and in Colombo (Western province), some families held a protest vigil in support of the detained former Director of the Criminal Investigation Department (CID), Shani Abeysekara, whose investigations had led to arrests and prosecutions of senior Navy officers, Army intelligence offices, a prison officer and others in relation to enforced disappearances and other serious crimes.

The Office of Missing Persons (OMP), the permanent state institution established by an act of parliament to establish the truth (not justice), acknowledged the missing and disappeared from all communities and commemorated the day with a discussion with organisations working on the issue. Some diplomats in Colombo, including UN Resident Coordinator Hanaa Singer, tweeted their concerns and views. Despite Sri Lanka being a party to the UN resolution calling on UN member states to observe August 30 as the International Day of the Victims of Enforced Disappearances, I couldn’t find news of any government initiative to observe the day.

Paangshu, a film highlighting the struggle of a mother looking for her missing son, has been screened in cinemas across Sri Lanka from August. In many cinemas, there were discussions after the screenings.

There was an effort to mark the day with children of the disappeared doing a wall painting but this did not happen because organisers could not find anyone willing to provide a wall. Some religious leaders and school principals, although sympathetic, were too scared to offer the walls of their institutions. One asked me what the paintings might look like, to which I could only reply that I could not predict nor censor the artistic freedom of children.

Many of the events faced restrictions and intimidation. Intelligence agents questioned the priest who hosted the event in Digana. Some families in Jaffna were asked not to join the protest and some bus operators pulled out of transporting them due to intimidation.

But the worst and most serious obstructions happened in Batticaloa, where police tried to mislead the Magistrate in their desperation to get a court order to stop the march. The families had gathered at a Catholic church, along with some nuns and priests. At one point, police entered the church compound and locked the gate to prevent the mostly elderly female family members and supporters from going to the road. But the protesters managed to force open the gate, resisted further police attempts to stop them and walked nearly two kilometres in the scorching sun to Gandhi park. One woman complained that a senior police officer had threatened to take action against them later. Leader of the group in the Ampara district, Thambirasa Selvarani, was distraught and angry that a policeman had grabbed the photo of her missing husband, the only one that she had.

Alarmingly, the police had referred to the event as illegal, citing three concerns. One claimed the event might cause a nuisance to the public and that the peace could be disturbed. But it was a Sunday and the march caused no inconvenience because people walked on the side of the road and crossed roads guided by helpful traffic policemen. No roads were blocked, no vehicles, pedestrians, shops, offices or residences were obstructed. I saw more inconvenience caused by an elected government parliamentarian engaged in a victory parade few weeks ago around Batticaloa.

The most absurd and dangerous concern of the police cited in the court order was to link struggles of families of the disappeared to potential resurgence of the LTTE. The attempt by police to discredit and label the families as terrorists or terrorist supporters when they were trying to find what had happened to their loved ones and demand those responsible to be held legally accountable is deplorable and must be rejected and put to rest.

In the past, state intelligence officers have also tried discourage and intimidate activists from supporting families of the disappeared by telling them that it was equivalent to supporting terrorism. In my many interactions with families of the disappeared spanning many years, including at the Batticaloa protest march, I have never heard them advocating violence, armed struggle or for a separate state.

It is the duty of the government to find out the truth of what happened to the disappeared, hold those responsible accountable and provide reparations. The government has a duty to ensure families of the disappeared and those who support them can engage in efforts to search for truth and justice freely and securely without being called terrorists or terrorist supporters.

The determination and courage shown by families of the disappeared to continue their efforts is inspiring, especially the defiance and resistance in the face of police obstructions in Batticaloa. The OMP, politicians, religious leaders, media, professionals, foreign governments, UN officials and bodies and all people of goodwill must support families of the disappeared in their struggles.