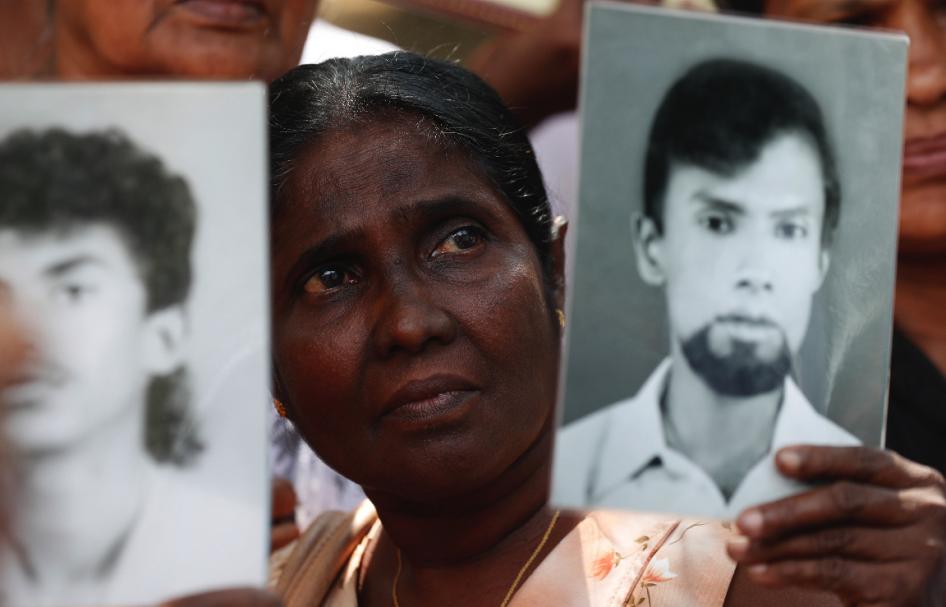 (New York) – Sri Lankan security forces and intelligence agencies have intensified surveillance and threats against families of victims of enforced disappearance and activists supporting them since Gotabaya Rajapaksa became president in November 2019, Human Rights Watch said today. The Sri Lankan government should fulfill its commitments to the United Nations Human Rights Council to strengthen efforts to locate the “disappeared” and bring those responsible to justice.

Activists working in six locations in the northern and eastern parts of the country on behalf of relatives of the forcibly disappeared told Human Rights Watch that there has been a significant increase in government surveillance and intimidation. One activist said that prior to a recent victims’ meeting, “every one of the mothers got at least six telephone calls from different intelligence agencies asking, ‘Where is the meeting?’ ‘Who is organizing the meeting?’ ‘What is being said?’” Another activist said, “We can’t do any visible programs.… We’ve stopped everything.”

“The families of Sri Lanka’s ‘disappeared’ have spent years waiting for answers, but with the Rajapaksas back in power, security forces are threatening them to drop their demands for truth and accountability,” said Meenakshi Ganguly, South Asia director. “The government needs to stop the harassment immediately and abide by Sri Lanka’s pledges to the UN to uncover the fate of the ‘disappeared’ and provide justice to victims’ families.”

Thousands of people, primarily ethnic Tamils, are believed to have been forcibly disappeared in state custody between 2005 and 2015, when the current president was defense secretary and his brother, current Prime Minister Mahinda Rajapaksa, was president. President Rajapaksa has resisted demands for justice, including past Sri Lankan commitments to the UN Human Rights Council, and said at a recent meeting with the UN that the “missing persons are actually dead.”

During the bloody civil war, from 1983 to 2009, between the Sri Lankan government and the separatist Liberation Tigers of Tamil Eelam (LTTE), both sides committed numerous abuses, including enforced disappearances. UN reports found credible allegations of enforced disappearances by government forces of captured LTTE fighters and Tamil civilians during the final months of the war in 2009. Among the army units the UN implicated in the worst atrocities at the war’s end were those commanded by the current army chief, Gen. Shavendra Silva, and the defense secretary, Gen. Kamal Gunaratne. On February 14, 2020, the United States State Department designated Silva and his immediate family members ineligible for entry into the US “due to credible information of his involvement, through command responsibility, in gross violations of human rights, namely extrajudicial killings.”

The new Rajapaksa administration has halted legal proceedings initiated by the previous government against navy officers accused of the enforced disappearance and alleged killing of 11 young men in Colombo and its suburbs in 2008 and 2009. In November 2019, following the presidential election, a government investigator looking into this and other cases of alleged serious rights violations implicating government officials fled the country following threats. Other criminal investigators have since been put under travel restrictions.

A member of the advocacy group Mothers of the Disappeared whose son was forcibly disappeared in 2009 told Human Rights Watch that since the presidential election she has been repeatedly visited by members of the police Criminal Investigation Department (CID).

“They have come and asked who is going to meetings,” she said. “And who is going to Geneva [to attend the UN Human Rights Council]. These are children who were taken by white vans from our houses or who surrendered [to the army]. These are the children we are talking about. I want to know what happened to my son – whether he is dead or alive, and if he is not alive, what happened to him and who did it; whether he was beaten, whether they broke a limb.”

The previous Rajapaksa administration had repeatedly denied government involvement in serious human rights violations, including enforced disappearances. However, under international pressure, Mahinda Rajapaksa in 2010 established the Lessons Learnt and Reconciliation Commission, which acknowledged an “alarming” number of allegations of disappearances in state custody, and said the government was “duty bound” to take “immediate” steps to bring those responsible to justice.

In 2015, the Sri Lankan government under President Maithripala Sirisena joined a consensus resolution of the UN Human Rights Council. A core commitment was to set up four transitional justice mechanisms to promote “reconciliation, accountability and human rights,” including an accountability mechanism involving international judges, prosecutors, and investigators; a truth and reconciliation mechanism; an office on missing persons; and an office for reparations.

Sri Lanka has made limited progress in meeting these commitments, but an Office on Missing Persons and an Office for Reparations have been established. During the election campaign and since taking office, the Rajapaksa government has said it does not intend to abide by the internationally recognized process to address alleged grave international crimes by both sides. The government has also cast doubt on the future of the Office on Missing Persons.

Given Sri Lanka’s long history of enforced disappearance, it is vitally important not to allow the government to simply dismiss these cases. UN member states at the Human Rights Council in late February should call upon Sri Lanka to comply with its international legal obligations, protect victims and witnesses, and keep its UN pledges in a time-bound manner.

Should the government fail to do so, the council should take the initiative and adopt accountability measures leading toward international investigation and prosecutions.

“Family members of Sri Lanka’s many ‘disappeared’ have a right to know what happened to their loved ones,” Ganguly said. “The UN Human Rights Council is the one flicker of hope many families have that the fate of those disappeared will one day be known, and that justice will be done.”