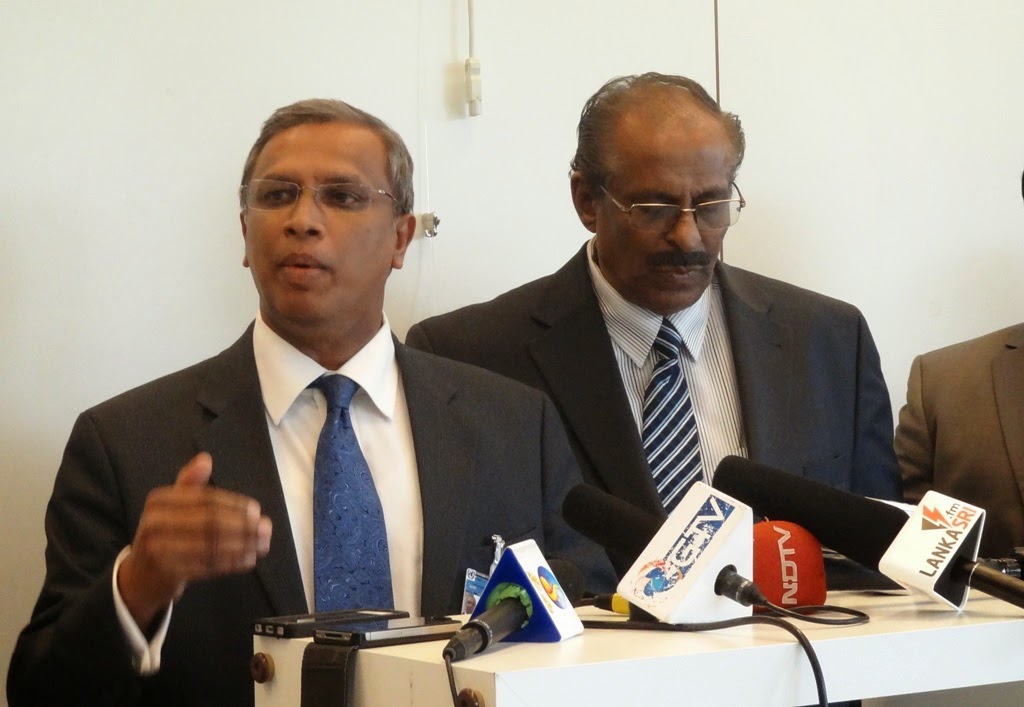 Sri Lanka faces fresh condemnation at the UN’s top human rights body this week in a move that observers say could lead to an international criminal investigation for war crimes.
A US-led resolution demanding accountability for thousands of deaths of ethnic Tamil civilians five years ago is almost certain to be adopted at the UN Human Rights Council (UNHRC) in Geneva.
President Mahinda Rajapakse has launched a diplomatic offensive to drum up support from smaller nations, but officials privately admit that it is a big ask given that even neighbouring India is siding with the US.
Rajapakse, who has tightened his grip on power after crushing Tamil separatists and declaring an end to 37 years of ethnic bloodshed in May 2009, feels he is being unfairly targeted by Western nations.
“This is like Cassius Clay using a schoolboy as a punching bag,” Rajapakse said in a recent reference to the former heavyweight boxing champion, Muhammad Ali.
Sri Lanka regards China and Russia as allies who will block any Security Council resolution, but the two permanent members have no veto at the UNHRC where a simple majority is sufficient to approve a censure motion.
The draft resolution, seen by AFP in Geneva, asks the office of the UN human rights chief Navi Pillay to “undertake a comprehensive investigation into alleged serious violations and abuses of human rights and related crimes by both parties in Sri Lanka”.
The resolution is to be taken up by the 47-member council on Thursday and followed by a possible vote.
Diplomats say Colombo has been dodging the issue of accountability, and its repeated promises to improve human rights no longer cut any ice because of a perceived lack of progress.
International watchdogs say there has actually been a deterioration of Sri Lanka’s rights record since the end of the conflict.
The arrest last week of two leading rights activists under strict anti-terrorism laws triggered international condemnation.
“With these latest actions, we remain convinced that continued scrutiny by the Human Rights Council is necessary,” the US embassy in Colombo said after Catholic priest Praveen Mahesan and fellow activist Ruki Fernando were detained as they met relatives who lost loved ones during the war.
Rajapakse’s former top envoy to Geneva, Dayan Jayatilleka, said the international community was wary of giving more time to Sri Lanka to ensure ethnic reconciliation and accountability five years after the fighting ended.
“I wouldn’t blame any state, however friendly and well-intentioned, of being exceedingly wary of buying in,” Jayatilleka said, writing in the daily “Island” newspaper.
In an article headlined “Last week, last chance in Geneva,” he argued that this week would be the most significant for the nation since the defeat of the Tamil Tigers in May 2009.

The military’s spectacular success in crushing the Tigers, who were known for their trademark suicide bombings, also sparked allegations that up to 40,000 ethnic Tamil civilians were ordered into a no-fire zone and bombed.

Charu Lata Hogg of London-based think tank Chatham House believes Sri Lanka may not agree to any foreign scrutiny of its war record, but the latest resolution could have a serious cumulative effect and lead to prosecutions at the International Criminal Court, based in The Hague.

“Any investigation conducted by the Office of the High Commissioner for Human Rights (as proposed in the draft resolution) will ultimately need to be referred to the International Criminal Court to initiate prosecutable action,” she said.

A Colombo-based European diplomatic source said any failure by Sri Lanka to conform with the resolution would accelerate the prospect of a international criminal investigation.

“The (draft) resolution says Sri Lanka must cooperate with an investigation,” the source told AFP on condition of anonymity.

“If Colombo does not, it will only speed up an international criminal investigation that is down the road.”

A new study published by international rights lawyer Yasmin Sooka, who had also been a UN advisor on post-war accountability issues in Sri Lanka, said there was evidence that merited action in the International Criminal Court.

“We urge the ICC prosecutor to explore the cases of individuals who bear the greatest responsibility,” said Sooka’s 110-page report unveiled last week following testimony from survivors of rights abuses in Sri Lanka.

Western diplomats said it was too early to discuss punitive action such as economic sanctions or travel bans, but the clock was ticking.

The US has said it was bringing a third resolution against Colombo in as many years because of its support for the Sri Lankan people and “concerns about the deteriorating human rights situation”.

Debate on the resolution is scheduled to begin in Geneva on Wednesday.

Local officials have maintained that the resolution is an “unwarranted interference” in Sri Lanka’s internal affairs.

However, in the short-term, the government is capitalising on the resolution to muster nationalist support ahead of a key local election.