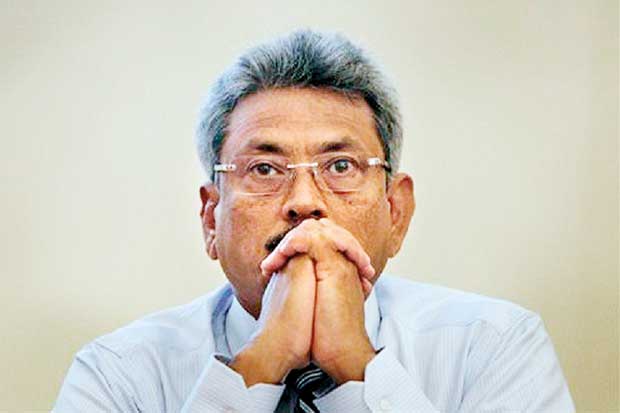 (ECONOMYNEXT 02.03.19) – Former navy chief, Wasantha Karannagoda, who is wanted in connection with the abduction and killing of 11 young men has for the first time involved former defence secretary Gotabhaya Rajapaksa in the case, court records showed.

Filing a petition in the Supreme Court seeking the prevention of his imminent arrest by the Criminal Investigations Department, Karannagoda has said that Rajapaksa was also aware of the case.

One of the key allegations against the war-time navy chief is that he did nothing to prevent the killing of the 11 men when the illegal incarcerations by the navy was brought to his attention in 2009.

The most chilling evidence against Karannagoda is that he knew about the abductions and the killings, but took no action to prevent them or secure justice for the victims. Involving Gotabhaya Rajapaksa adds a new dimension to the case.

Setting out the sequence of events according to him, Karannagoda for the first time brought Rajapaksa into the case in an apparent bid to shift responsibility to the then defence ministry chief who was also in charge of the police.

Karannagoda, in his 12-page petition said he had been informed of the allegations against his own security officer Sampath Munasinghe who was accused of abducting several men who were illegally held at a navy facility in Trincomalee in 2009.

“In those circumstances, on the 23rd of May, 2009, the petitioner (Karannagoda) informed the then secretary, ministry of defence, Mr. Gotabhaya Rajapaksa of the allegations and recommended that the police investigate the matter,” according to the petition filed by Karannagoda’s lawyers.

However, Karannagoda’s then naval secretary Shamal Fernando had in his testimony to the police made it clear that Karannagoda took no action when the then minister Felix Perera brought the matter to his attention. Had Karannagoda taken action promptly, the lives of at least five of the victims could have been saved, Fernando had said.

Karannagoda’s fundamental rights application seeking an order preventing the CID arresting him — after he was named the 14th in a list of 14 suspects accused of conspiracy to murder — was put off for March 7 for support by his lawyers.

The state prosecutors refused to give an undertaking that he will not be arrested until the Supreme Court case was disposed of. This was despite Justice Priyantha Jayawardena, one of the judges from the three-judge bench headed by Chief Justice Nalin Perera, repeatedly asking Senior Deputy Solicitor General Viraj Dayaratne for that assurance. Justice Jayawardena recused himself from the case.

Late last month, Colombo Fort Magistrate Ranga Dissanayake impounded Karannagoda’s passport and informed immigration authorities to prevent him from leaving the island. He is now on the run and police have not been able to track him down.

The CID informed the magistrate that Karannagoda had aided and abetted the illegal confinement of the 11 young men by navy personnel directly under him. He was also accused of concealing information as well as trying to mislead investigators.

CID detectives have uncovered shocking details of how men directly linked to Karannagoda carried on a lucrative “white van operation” abducting children of wealthy business families and killing them after extorting money from them. Karannagoda’s security officer was known to be a lavish spender despite his modest income as a navy officer.

One of the naval officers implicated in murder had used a car from a victim and given it as a birthday gift to his wife. While investigating the abduction of the young men, the CID stumbled on another double murder of businessmen carried out by a naval unit which operated from the Welisara camp.

A van stolen from those two victims had been cannibalised, but police were able to trace some of the parts. There were reports of some navy personnel meeting with mothers of the victims and forcing them to part with their gold jewellery in exchange for the return of their children, a promise never kept.

An internal naval investigation had revealed sordid details of the organised criminal activities of navy officers and men under Karannagoda who had kept silent when he was told about the plight of five out of the 11 men.

The crimes of the navy men under Karannagoda were not made public till the change of government in 2015.

“Had Admiral Karannagoda taken steps at the time he was told about the five children (out of the 11 young men) who had been illegally incarcerated by the navy, they could have been saved,” an investigator told the Colombo Fort magistrate last month.

Eight suspects – all navy personnel – are currently on bail and four are in remand custody. Karannagoda is most likely to join the four in remand custody, but police have failed to track him down. Although his lawyers filed a petition in the Supreme Court, he himself did not show up.