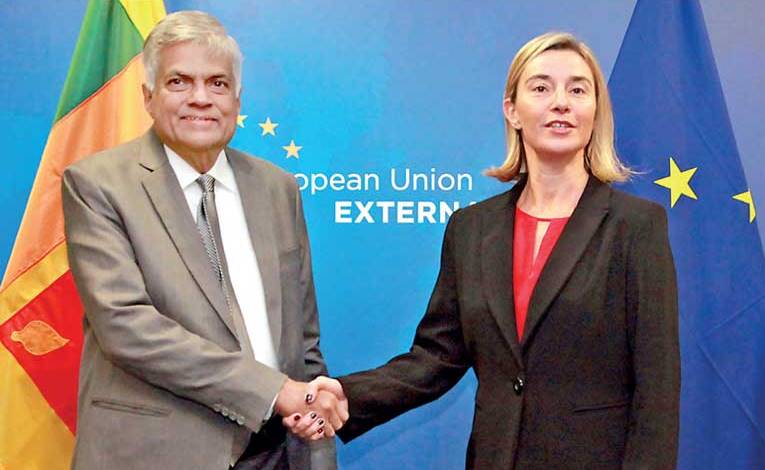 The European Union (EU) has nearly doubled its development assistance to Sri Lanka to € 210 million (approximately Rs. 34 billion) for the period until 2020, compared to the amount from 2007-2013.

The EU will finance projects in a wide range of areas, including those supporting the Government’s reconciliation priorities under the Peacebuilding Priority Plan, the resettlement of Internally Displaced People, assisting transitional justice and building local government capacity as well as supporting development in Sri Lanka’s poorest areas.

The High Representative congratulated the Sri Lankan authorities on their achievements over the past 21 months and reaffirmed the European Union’s continued support to the Sri Lankan Government and its reform agenda, which is committed to improving governance, fighting corruption, strengthening economic growth and protecting human rights, for the benefit of all Sri Lankans.

The HR/VP and the Prime Minister discussed the process of national reconciliation in the country, highlighting the importance of addressing the underlying causes of the conflict and beginning a process of healing.

They also discussed the implementation of last year’s UN Human Rights Council Resolution, which was cosponsored by the Sri Lankan Government. The steps taken so far send a clear signal that the Sri Lankan Government is committed to moving towards genuine reconciliation and accountability, processes that the European Union will continue to support.

Progress has been made in a number of areas in EU-Sri Lanka relations, including the resumption of Sri Lankan fish exports to the EU in June this year.

The HR/VP welcomed Sri Lanka’s GSP+ application, which will give the country preferential access to the European Union’s market.

The High Representative informed the Prime Minister of the ongoing technical application assessment, while the Prime Minister committed to making additional efforts to implement Sri Lanka’s international human rights, labour and environmental commitments, so as to give the highest possible chance for a successful application. Regional issues in South Asia were also discussed during the meeting. (Colombo Gazette)