Sri Lanka: Establishing the Office of the Missing Persons (OMP) is absurd and of no use – Defence Secretary General (Rtd) Kamal Gunaratne 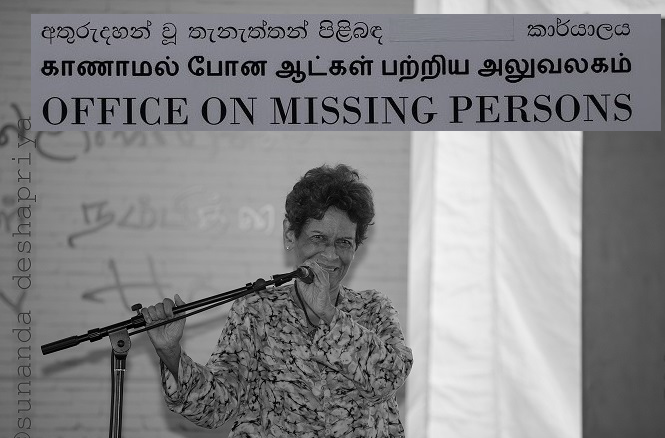 In an interview with state-owned Daily News Defence Secretary General (Rtd) Kamal Gunaratne says that establishing the Office of the Missing Persons (OMP)as per the UNHRC recommendations was absurd and it is of no use.

Further, he says that instead of implementing the commitments previous government have made through UN Human Rights Council (UNHRC) resolutions, the Sri Lankan Government  will pursue a national effort to achieve “sustainable peace” through an “inclusive, domestically designed and executed reconciliation and accountability process.”

Here is the relevant section of the interview.

Q: The Office of the Missing Persons (OMP) was established during the previous regime as per the UNHRC recommendations. How effective do you think this was?

A. This is absurd. Anyone can just come and complain that their son or family member is missing. But you need to ascertain the accuracy of these claims. They are just accepting complaints and those giving evidence are kept secret and they want the members of the Security Forces to be charged, without being given any opportunity for cross-examination as those people are not identified. This is a totally wrong procedure and it does not suit our legal system.

Q. Isn’t there some form of closure to offer the families of disappeared persons?

We have to start a new mechanism and go into lots of details and if we are issuing death certificates or compensation then it has to be established without doubt that the person concerned is really dead. This cannot be done by this OMP and it is of no use. The motive of this organization is questionable as they have been going to people’s houses and getting them to come forward and say that their loved ones are missing. How can we trust them and cooperate?

But I agree with you there has to be a system to give closure to the sufferings of these people, so we must scrutinise this list and try to find solutions.

Here is what General Gunarathna says about the Tamil demand for self-governance.

Q: One of the main demands of the Tamils is to be given self-governance on the grounds that Tamils are deprived of their rights. Do you agree?

A. I would like to invite anyone who is levelling these allegations to go around the South of this country and see the percentage of Tamils living in these areas. See if they have any problem living among the other communities. They are in fact, doing very well. Of course there are the rich and the poor in every community and that is not limited to just the Tamils. But some are highly educated and others are top class businessmen. I too have so many Tamils who are my very good friends and I assure you Tamils in this country are definitely not ill-treated. This is a ploy played by politicians who want to inculcate hatred among the people. They want to create hatred and anger in order to come into power. The Tamil people have suffered enough and they should now stop trying to ride to power on the sufferings of their people. They should be discussing with the Government and trying to get the best for the people they are representing.