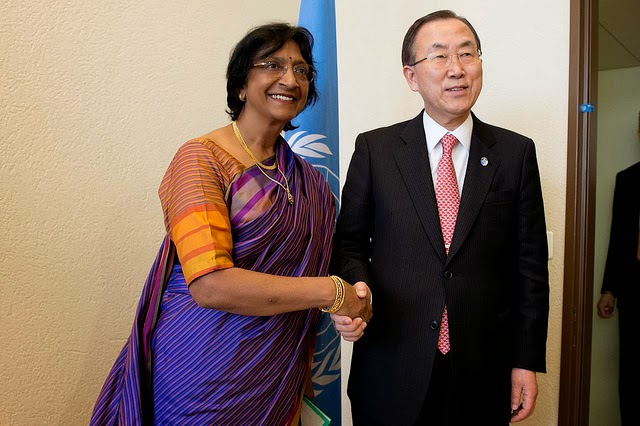 A first draft of the third and toughest US sponsored resolution on Sri Lanka at the UN Human Rights Council calls for an investigation into alleged abuses by both parties to the conflict to be led by the Office of the High Commissioner for Human Rights (OHCHR) Navi Pillay. The draft resolution which was in circulation yesterday, rules out an investigation by a Commission of Inquiry, but sets the stage for a Pillay-led probe to be supported by findings of special procedures mandate holders – or special rapporteurs.
The resolution in its initial draft has opted for the OHCHR inquiry mechanism, one of the investigative processes available to the Council to hold the Sri Lankan Government to account over mounting allegations of rights abuses.
Circulated by the US, UK, Montenegro, Macedonia and Mauritius, the resolution draft requests the office of the High Commissioner to assess progress towards accountability and reconciliation, monitor relevant national processes and to investigate alleged violations and abuses of human rights and related crimes by both parties in Sri Lanka.
The latest resolution welcomes Pillay’s recommendation in her Sri Lanka report, on the need for “an independent and credible international investigation in the absence of a credible national process with tangible results.”
The OHCHR probe offers the Sri Lankan Government the grace period of yet another year, before facing a potential North Korea style UNHRC Commission of Inquiry, analysts said.
Pillay is being called upon to present an oral update to the UNHRC at its 27th Session (in September) and a comprehensive report followed by a discussion on the present resolution at its 28th session.
The resolution also encourages the Office of the High Commissioner and relevant special procedures mandate holders to provide advice and technical assistance on implementation of the steps outlined.
The resolution has called on the Government of Sri Lanka to release the results of its investigations into violations by security forces, including the attack on unarmed protestors in Weliweriya.
In its first text, the resolution urges the Government to investigate attacks on temples, mosques and churches and take steps to prevent further attacks. “Calls on the Government of Sri Lanka to investigate and hold accountable perpetrators of attacks on places of worship, journalists, human rights defenders, members of religious minority groups and other members of civil society,” the text says.
Going into the nitty gritty of devolution issues in the country, the draft resolution also encourages the Government to provide the Northern Provincial Council and its chief minister with “the resources and authority necessary to govern, as required, by the 13th Amendment of the constitution”.
Intense lobbying on the language of the resolution will commence this week and continue through till it is officially tabled in late March.