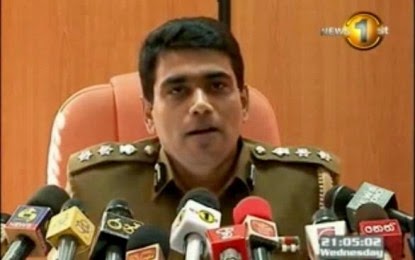 Editorial – Ceylon Today
Yesterday, our lead story, quoting Police Spokesman SSP Ajith Rohana said that hereafter police would use ‘necessary force’ as opposed to ‘minimum force’ in dealing with troublemakers.He said this to seemingly justify the recent killings of suspects in police custody and the police assault on protesting undergraduates.
Extra judicial killings by the police and the country’s armed forces first came into focus during the April 1971 insurgency, where it is estimated that 13,000 Sinhala youth, both men and women, from the South, lost their lives, many of whom, ipso facto, were victims of extra-judicial killings.
It once more gained the dubious limelight 12 years later, after the July ’83 riots, which spawned Tamil terrorism and ended only 26 years afterwards, in May 2009.
In the interim period, with the signing of the Indo-Lanka Peace Accord and the Sri Lankan security forces being confined to barracks after the induction of the IPKF as a condition of the Accord, Southern Terrorism which had previously been ruthlessly crushed 16 years ago in April ’71, once more raised its head as a protest against India’s armed intervention in the internal affairs of the island.
If the rise of Southern Terrorism in April 1971 was to instal a Marxist State in Sri Lanka by an armed revolution, the ostensible reason for its ‘rebirth’ in July 1987 was as a protest against the Indo-Lanka Accord and the induction of the IPKF to the Northern and Eastern parts of the country, supposedly to maintain the peace, just when the Sri Lankan security forces were about to deliver the death knell to Tamil terrorism in the North.
The resurgence of Southern Terrorism in the South in July 1987 was finally put down after the end of a bloody war (in the South) which lasted for more than two years, leaving in its aftermath, the brutal killings of thousands of Sinhala youth once more, many of whom were victims of extra judicial killings, a repetition of April ’71.
This doesn’t discount the fact of the thousands of innocent Tamil civilians who also lost their lives, especially in the period, July 1983 to May 2009, victims of the establishments, whether it was the Sri Lanka Government or the Indian Government, the latter, vis-à-vis the IPKF.

The focus of this piece is the danger of institutionalizing extra judicial killings in the present and in the future, as insinuated by SSP Rohana’s alleged apologia in respect of the recent police assaults on unarmed, protesting undergraduates and the killings of suspects while in police custody, ostensibly being put to death in self defence for threatening to attack their law enforcement escorts with lethal weapons while being in handcuffs!

When considering such tragedies, it was not so long ago that the people of this country equated such extra-judicial killings to take place with such unwavering consistency and monotonous regularity, to the banana republics of the Latin Americas, countries in Sub-Saharan Africa, Bangladesh and States such as Taiwan, South Korea and Malaysia, in the Far East and in South East Asia.
Though unreported, such killings were accepted as the norm, taking place behind the Bamboo Curtain (Mao’s China) and the then USSR and its satellite countries, but never in Sri Lanka, with the possible blight being during the time of the ’71 April Insurgency.
But now, the tables apparently have changed, with those countries once labelled as being pariahs, returning to respectability and decency, and thus being recognized and accepted by the global community of nations, while Sri Lanka is seemingly, wantonly, sinking into that abyss, by apparently being nonchalant about what the world community thinks of such in the 21st century, which have shaken the dust off their feet which was the 20th Century, after the Cold War was relegated to history with the collapse of the Berlin Wall, 25 years ago in 1989.
SSP Rohana and the Government of Sri Lanka will be living in a fool’s paradise if they think that they can get away scot free by playing a word game by using phrases such as ‘minimum force’ and ‘necessary force,’ in a globalized environment, where Sri Lanka is but a pawn on the global chessboard of geo-politics and human rights and neither a King or Queen, to strut about and strut around in a state of self-imaginary aggrandizement, as metaphorically exemplified in Hans Christian Andersen’s popular children’s fable, “The Emperor and his New Clothes.”