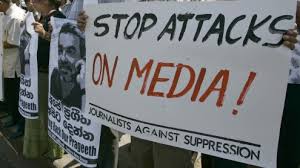 Aluthgama police were yet to arrest the suspects identified in connection with the assault of Daily Mirror /Lankadeepa Aluthgama Correspondent Thusitha Kumara de Silva and his wife on Friday night over an alleged exposure of an artificial toddy mafia in the Kalutara District.

Apparently he was t journalist who covered t raid some months back of t huge illicit distillery belonging to a then opp politician. It is alleged t assault was carried out by his goons now that he is again a powerful minister. After 5 years breaking journalist bones has begun. https://t.co/6EXm7OASko

Thusitha Kumara and his wife, who had been rushed to Aluthgama Base Hospital in a traumatic condition with assaults to their heads and body by clubs on Friday night, had later been transferred to Kalutara General Hospital in Nagoda on Saturday.

The journo and his wife were away from home on a personal matter and had rushed back hearing that an armed gang had stormed their house and was attacking it around 7.00 p.m. Friday (06). Their son was the only occupant at home during the incident.

When the couple reached the scene, about 10 to 15 men armed with clubs had started attacking them threatening “you were the one who wrote about the artificial toddy industry in newspapers and exposed us”.

The gang had soon left the scene leaving the wounded couple behind who were rushed to the hospital by the neighbours.

Thusitha Kumara had lodged a complaint with the Aluthgama police regarding the assault and had given details of five of the gang as identified to be residents of the same area. His mobile phone and cash amounting to Rs.4,800 had also been missing in the attack.

Speaking to the Daily Mirror, National Organiser of Independent Media Foundation of Kalutara Suresh Wijeyarangana said the district journalists gathered in solidarity to demand justice to Thusitha Kumara and his wife.

He said Thusitha was renowned for his brave reporting against illegal artificial toddy manufacturers in the area, where several large scale detections were made by Police Special Task Force (STF) personnel a few months back and seized 40,000 litres of chemical toddy in Aluthgama.

The demonstration was held to urge the law enforcement authorities to secure the lives of journalists who fight against this illegal and artificial toddy industry in the area carried out by the goons of top politicians and some leading underworld figures of Kosgama area.

Meanwhile, the Aluthgama police had searched the houses of the five identified suspects who had reportedly fled the area.

Special police protection has been given to journo Thusitha Kumara and his wife at the hospital as well as to their smashed house in Hettimulla.