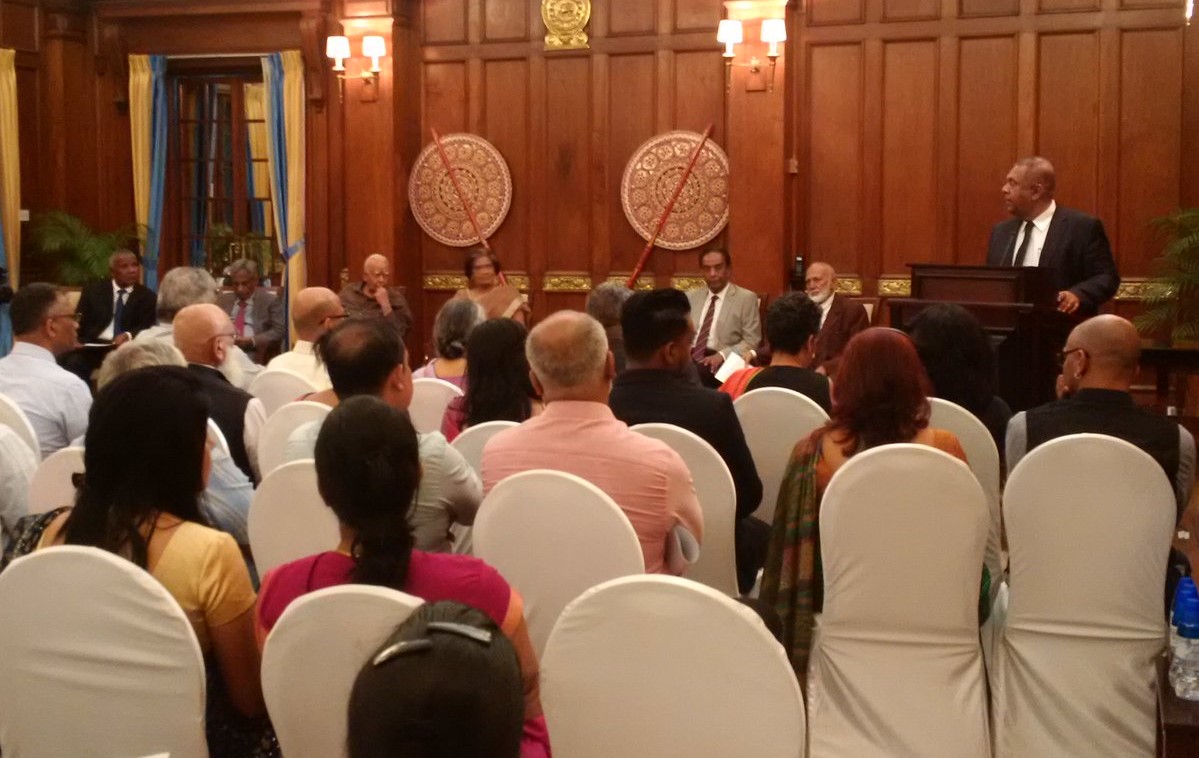 Image: Foreign Minister speaking at the event for handing over the Consultation Task Force Report at the Presidential Secretariat.

The Consultation Task Force on Reconciliation Mechanisms (CTF) in its final report submitted on Tuesday recommended to have a majority of national judges and at least one international judge on every bench to try war crimes and serious violation of Human Rights allegedly taken place in Sri Lanka.

“The Court shall ensure that there will be a majority of national judges and at least one international judge on every bench,” it recommended.

It also stated that: “International crimes such as war crimes and crimes against humanity must be criminalised and incorporated into Sri Lankan law immediately through legislation, without temporal prescriptions and in a manner that allows for the prosecution of these crimes committed in the past, in line with Article 13(6) of the Constitution and Article 13(2) of the International Covenant on Civil and Political Rights (ICCPR).”

The report said that consultations in the North and East in particular, as well as in some in the rest of the country, revealed the overwhelming lack of trust in the State, its institutions and mechanisms. The belief was strongly expressed that exclusively domestic mechanisms would not be credible. At the same time, consultations outside of the North and East and with the armed forces, revealed strong opposition to international participation on the mechanisms. Many however, did recognise that given the limitations of existing national capacity in specific areas, international expertise should be engaged. The CTF also notes the commitments made by the Government of Sri Lanka on international participation in the mechanisms, in the resolution that it co-sponsored at the UN Human Rights Council in October 2015.

“Therefore, the CTF recommends the participation of both international and national personnel on the four mechanisms ranging from the provision of advice and expertise to active membership of the mechanisms including as judges and prosecutors, as spelt out in the UN Human Rights Council Resolution of October 2015, co-sponsored by the Government of Sri Lanka.” It said.

Further, the report recommend that “the Special Court should be mandated to try international crimes, including war crimes and crimes against humanity and pay particular attention to crimes of sexual violence and crimes against children. Bearing in mind the mandate of the court in terms of transitional justice and addressing impunity, the CTF recommends that there be no temporal limitations to the jurisdiction of the Special Court.”

The CTF presented its final report to former President Chandrika Bandaranaike Kumaratunga, the Chairperson of the Office for National Unity and Reconciliation (ONUR) on Tuesday at the Presidential Secretariat.

The CTF was appointed by Prime Minister Ranil Wickremesinghe on the January 26, 2016 to ascertain public views, particularly those of affected communities across the country, on the reconciliation mechanisms proposed by the Government and incorporated in the Resolution on Sri Lanka at the UN Human Rights Council.

Issuing a statement the CTF said it was assisted in its work by two advisory panels—one of Experts and the other of Representatives. Consultations throughout the country were carried out by 15 CTF-appointed Zonal Task Forces (ZTFs).

The ZTFs conducted public meetings in all districts as well as focus group discussions with affected individuals and communities.
www.dailymirror.lk