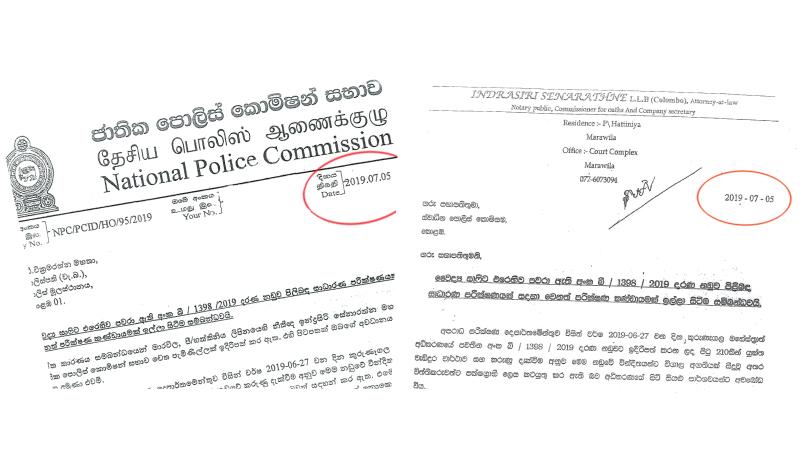 The National Police Commission (NPC) decision to prevent the transfer of two senior cops in Kurunegala over their involvement in framing a Muslim doctor in a pseudo illegal sterilisation scare has raised serious questions about its alleged role in the communally charged controversy.

The NPC stopped the transfers despite therecommendation for Kurunegala DIG Kithsiri Jayalath to Trincomalee and SP Mahinda Dissanayake to Kattankudy, Batticaloa, being accompanied by a two page justification for their removal by Acting IGP Chandana Wickremaratne.

In his note to the Police Commission dated July 27 and seen by Sunday Observer, the Acting IGP explained that allowing

DIG Jayalath to remain in Kurunegala would obstruct ongoing investigations in the Dr Shafi Shihabdeen case. The Acting IGP’s note added that CID investigations had revealed that DIG Jayalath had told the Divaina journalist that a special police team was conducting investigations to take a Muslim doctor linked to the National Thowheed Jamaath who was alleged to have made 4000 Sinhalese mothers infertile.

On May 23, the Divaina newspaper published a lead story the headline that “A Thowheed Jamaath doctor has rendered 4000 Sinhala mothers infertile”.

The sensational report sent shockwaves across the country and paved the way for Dr Shafi’s arrest two days later. After the Muslim doctor working at the Kurunegala Teaching Hospital was arrested, DIG Jayalath invited women with complaints of being sterilised without their consent to come forward against Dr Shafi.

The IGP’s letter to the Commission stated that based on a report by the Senior DIG of the CID, DIG Jayalath and SP Dissanayake continuing in their present stations would be inimical to the conduct of investigations in the alleged sterilisation case.

However, in a stunning move, the NPC has refused to transfer the DIG in spite of the IGP’s damning report on his activities in the Kurunegala region. The NPC has also turned down the recommended transfer of the Kurunegala SP Mahinda Dissanayake.

The Sunday Observer can now reveal that this is not the first time the conduct of the NPC has been brought into question over its handling of the Kurunegala sterilisation controversy. Two weeks ago, the Police Commission wrote to Acting IGP Wickremaratne based on a complaint the Commission received, instructing him to remove the Dr Shafi probe from the CID’s purview and appoint an independent body to investigate the allegations. The NPC directed the IGP to allow the Special Investigations Unit to supervise the CID investigation into the sterilisation scare.

Documentation seen by the Sunday Observer revealed that the Police Commission issued directives to the IGP about the CID investigation on the very same day it received the complaint. The complaint dated July 5, 2019 was made by a lawyer named Indirasiri Senaratne from Marawila. Employing extraordinary haste, the very same day – July 5, 2019 – the Police Commission directed the IGP to have the SIU investigate the CID’s investigation and submit a report to the NPC as soon as possible. The SIU investigation into the CID was ordered before the NPC saw fit to call for and study the 210 page B report submitted to the Kurunegala Magistrate’s Court by the CID on June 27 to report on the investigation.

The Kurunegala sterilisation scare has brought to light an astounding degree of collusion between multiple institutions of the state and professional bodies.

During their investigations, the CID found evidence of falsified and backdated police complaints. Investigators informed court that the Director of the Kurunegala Hospital, one of the sterilisation drama’s main protagonists, has repeatedly attempted to mislead court and the CID. The Director of the Hospital has also been accused of hindering the probe. Furthermore, at least four complaints have been forwarded to the Judicial Service Commission (JSC) – including one from the CID itself, through the IGP – about the conduct of the Kurunegala Magistrate Sampath Hewawasam.

CID Director SSP Shani Abeysekera told the Parliamentary Select Committee probing the Easter attacks that the Magistrate’s wife works as an anaesthetist at the Kurunegala Teaching Hospital where the scandal erupted.

If the CID investigations continue to be obstructed by the Kurunegala DIG and SP with the tacit support of the Police Commission, sleuths may be left with little choice but to cut short investigations against them and produce them for offences under the ICCPR Act, according to highly placed police sources.