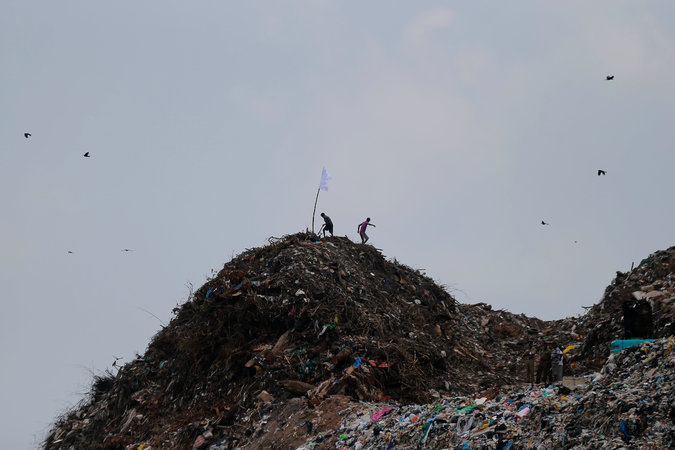 Image: White flag being hoisted on the top on the Meetotamulla Garbage dump after the tragedy in April 2017.

It is a typical incongruity of these times that constitutional reforms promising protection of civil liberties are discussed in tight-lipped seriousness in Colombo even while the police seem unable to arrest the hate mongering leader of the Bodu Bala Sena, Galaboda Gnanasara despite two arrest warrants being issued by the courts.

Business establishments of the Muslim community are subjected to one arson attack after another in a carefully targeted strategy. Meanwhile the leadership of the unity alliance holds forth in stern pronouncements on hate speech, exhorting the police to do their job properly.

Hallucinatory wanderings of apreposterous nightmare
In that most peculiar of ironies, Sri Lankans are also promised more law to tackle the problem of unrestrained hate speech while the law already on the statute books is not being properly implemented, as would be evident to a wide-eyed child.

All these comprise the sum of hallucinatory wanderings of a preposterous nightmare. In what sense can complicated constitutional rights be presented for discussion with any measure of credibility when the miserable basics of a Rule of Law system are not evidenced in the first place? This question well reflects the predicament in which this country finds itself today.

There are more contrasts at play. Affording a right of legal counsel to a suspect upon being detained by the police appears to be anathema to some. They gasp and they stutter as if the vilest of suggestions was being made. One embarrassment upon another follows the drafting sequence of amendments to the Criminal Procedure Code, culminating most recently in the red-faced withdrawal of the latest Bill. This unacceptably vested police officers with the discretion to prevent or allow the right to legal counsel depending on if it would prejudice the investigation.

Silly and cursory ‘safeguards’ are not sufficient
The same question is applicable to the fiasco of a legally flawed draft Counter–Terrorism policy framework. This was permitted to be drafted in secret for well over a year in a hushed and tightly screened process without significant protest from any source. Disquietingly this included those who would have screamed literally from the rooftops in Geneva and New York if such a dastardly proposal had emerged from the Rajapaksa Presidency. That point bears repeating. The ready propensity to churn out papers and engage in a plethora of conferences on the comforting albeit illusionary topic of transitional justice in Colombo was starkly absent here. And therein the hypocrisy of the process is thoroughly exposed.

Suffice it to be said that the main distinction between counter terror law and the criminal justice law is that the first caters for extraordinary situations even while not abandoning fundamental civil liberties. The second deals with the ordinary process of bringing criminal offenders to book with well defined safeguards against abuse. But the extraordinary cannot be allowed to become the ordinary through bad law reform. Slapping a silly and cursory provision exhorting that a counter–terror law is not meant to be used other than for combating terror, as the draft CTA attempts to do, will not suffice. That flowery injunction will merely be a disregarded footnote in the abuse of power by law enforcement agencies. That profound danger can only be prevented by narrowly and tightly drawn offences. But what we have on the table as draft counter-terror legislation illustrates the very opposite of that caution.

Sri Lankans do not need to be taught the perils of superimposing emergency law on ordinary law. Our entire unhappy history bears testimony to that fact. Emergency law had de facto replaced the normal law of the land for decades, starting from the first southern insurrection in the seventies, leading through to a brutal ethnic war in the North and East and swallowing up also a second catastrophic wave of disappearances and killings in the South in the eighties. This column has repeatedly made the point that ordinary people of all ethnicities are the first victims of the abuse of emergency law. Its impact is not limited to one race or one community. That point remains true then as it does now.

Restoring the Rule of law at a mundane level
Moreover it beggars belief that a counter-terror draft which gives enormous powers to the police can be presented when the lack of public respect in the institution of the police has fallen to an extreme low. Just this week, enraged villagers in Nanu-Oya protesting over the death of a child by a speeding driver of a tipper who then sought shelter in the police station, compelled a senior police officer to write an affirmation on a sheet of paper that the police will take action according to law and prosecute the responsible individual. What absurdity is this? It is at such a mundane level that the Rule of Law must be restored.

The questions are simple. Could not these embarrassments of a thwarted CCP amendment and a grossly problematic CTA have been prevented in the first place by more farsighted strategy or in the minimum, by adherence to accepted legal norms? Who exactly is driving such subverted law reform policies? Why is it that at the very mention of contemplated law reform, the more sensible among us cannot but flinch, uncertain of what monstrosity may now be inflicted on the people?

Certainly the reluctance to allow full blooded rights to the unfortunate denizens of this land is a peculiarity of this country. Across the Palk Strait, India allowed the right to life to its citizens at the very dawn of independence and the drafting of a new Constitution. This has, by and large stood the rigorous test of time and served the people well. Here, in contrast, the inventiveness with which rights have been denied by the political and legal elite is something to marvel at. As a matter of established history, resistance to framing the law in a way that actually protects the vulnerable has certainly stemmed not only from the political establishment.

Unpalatable realities of garbage in more ways than one
This same dysfunction is present today in all its distressing features. This is why discussions on constitutional reforms are perceived by citizens as an isolated, cosmetic and political exercise in which they play no part. Indeed, as garbage piles up on their doorsteps, victims affected by natural disasters complain of no redress and parliamentarians are seen as increasing their luxuries while the people languish in misery, the Constitution has become of pitiable, negligible value. Its value stagnates, almost like garbage itself.

This perception is unfortunate. Yet it is increasingly becoming an unpalatable truth.