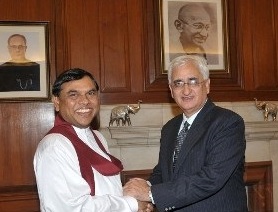 The conduct of NPC polls figured somewhat prominently when Economic Development Minister, Basil Rajapaksa held talks with Indian External Affairs Minister Salman Khurshid in New Delhi on Friday. For months now, a diplomatic tussle over a visit to New Delhi by Basil Rajapaksa and or one by Khurshid to Colombo had gone on. Sri Lanka sought the visit to explain to Indian leaders the Government’s position with regard to the 13th Amendment.
However, the Indian side had on many occasions cited previous commitments and India’s inability to arrange a meeting. Similarly, requests by India’s former High Commissioner in Sri Lanka, Ashok Kantha seeking Colombo’s acceptance of a visit by Khurshid was put on hold on the grounds that Sri Lankan leaders had previous commitments. As Indian concerns grew, New Delhi cashed in on the request from Sri Lanka and invited Economic Development Minister Basil Rajapaksa.

He flew to New Delhi on Thursday accompanied by India’s new High Commissioner, Y.K. Sinha. The latter had only presented his credentials to President Rajapaksa on Wednesday and his first mission on Sri Lanka was back on Indian soil. According to External Affairs Ministry sources in Colombo, Rajapaksa also met with a delegation representing fishermen from Tamil Nadu. He heard the different issues raised by them.

Minister Rajapaksa explained to EAM Khurshid that a Parliamentary Select Committee (PSC) had been appointed to examine the changes required in the 13th Amendment, these sources said. They added that Minister Rajapaksa had also explained to New Delhi what he called the Government’s three ‘D’s programme — Demilitarisation, Democratisation and Development. The sources claimed Rajapaksa’s visit was a success since he was able to apprise India about Sri Lanka’s position. Yet there was no formal media briefing or statements from the Sri Lanka side, either in New Delhi or in Colombo.

In marked contrast, India declared it had told Rajapaksa that the PCs were established as a result of the Indo-Sri Lanka Agreement of 1987. Hence, New Delhi argued that any changes to those provisions could not be made “unilaterally” without consultation with India. New Delhi wants Sri Lanka to also go beyond the 13th Amendment as ‘promised’ by UPFA leaders.

The message means India is opposed to any change even after the NPC polls. Electronic and print media in New Delhi and other world capitals reported an ‘on camera’ briefing by V. Narayanaswamy, the Tamil Minister from Pondicherry in Tamil Nadu in the Indian Prime Minister’s office. Here is a transcript of the widely televised statement:

“Initially, the Rajapaksa Government gave an assurance that they will fully implement the 13th Amendment. Our Government was very happy about it. Now, of late, we get to know from the Sri Lankan authorities and also Sri Lankan political persons that the Sri Lankan Government is trying to dilute the 13th Amendment. Therefore, at the time the President Rajapaksa met the Honorable Prime Minister Dr Manmohan Singh in Delhi, the Prime Minister made it very clear to him three important points. Number one, the fishermen in Tamil Nadu should not be harassed. Number two, the people who lost their homes — the land, they should be rehabilitated and also the people should be given the rehabilitation as early as possible, the Tamils in Sri Lanka who have been… the war ravaged people. And thirdly, the Prime Minister said that the 13th Amendment should be implemented in toto.

Minister Rajapaksa’s talks in New Delhi this week therefore assume much greater significance in the light of the bold Indian assertions. They do throw light on why the Government first went into high gear to change the 13th Amendment and later placed it in the hands of a PSC. More so, when the latter has turned out to be a body made up of only UPFA representatives. Now that India has made public that it does not want any “unilateral” changes, will the process the Sri Lanka Government has set in motion to amend the Constitution until other issues overshadow them go ahead or will it risk a full frontal diplomatic confrontation with India. That indeed would be the challenge for the UPFA.

Externally such a challenge comes at a time when action and “corrective” measures are being taken by the Government in the wake of the US backed second resolution at the UN Human Rights Council (UNHRC) in Geneva. It has officially declared that NPC polls will be held in September. More than 50 additional recommendations of the Lessons Learnt and Reconciliation Commission (LLRC), as exclusively revealed in these columns on June 9, have now been included in the National Action Plan. A separate website has been set up for this plan. Twelve Police Special Task Force (STF) commandos have been arrested in connection with the 2006 murder of five students in Trincomalee. Changes to the 13th Amendment have been put on hold with a much publicised ‘Urgent Bill’ to amend the Constitution virtually forgotten, at least until NPC polls are over. These and other measures are aimed at setting the backdrop for both the visit of United Nations Human Rights High Commissioner Navi Pillay in August and the September UNHRC sessions.

With those over, the question for the UPFA will be how constitutional changes thereafter will be viewed by the international community. This is particularly in the light of the UNHRC sessions in March next year. Sri Lanka at that session could be accused of reneging on its promises. There is little doubt that India, which voted with the second US resolution, will publicly support punitive measures against Sri Lanka, in such an event. At least temporarily, by not making changes to the constitution before the NPC polls, the UPFA Government has won a respite– from the so-called international community and India. Hopes of conducting the Commonwealth Heads of Government Meeting (CHOGM) in November in Colombo successfully, and having fuller participation of Heads of Governments have increased. Indian participation at the highest levels is likely though a forerunner would be the ‘smooth conduct’ and outcome of the NPC polls.
ST