Sri Lanka: Bring up the bodies- Creeping towards an international inquiry into war crimes 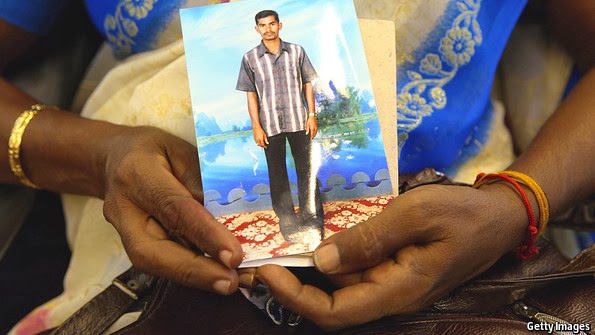 EVIDENCE of past atrocities keeps turning up in Sri Lanka. Last year 154 bodies were unearthed from a mass grave behind a hospital in Matale, in the centre of the island—victims, in all likelihood, of an uprising by Marxist rebels in the 1980s. In February an excavation in Mannar, in the north-west, produced 81 bodies, casualties of a bigger and more recent conflict, the long civil war between Tamil secessionists and the state. The police blame the rebels, a cruel and bloodthirsty movement defeated in 2009, for the deaths. But the army is not above suspicion either.
Now comes a small but gruesome find near Mullaitivu in the north-east, the site of awful fighting and massacres in the final months of the civil war. Then, perhaps 40,000 people, many of them civilians, were killed as the army trapped the rebels and fleeing Tamils. Late last month nine skeletons were lifted from a shallow grave in the garden of a family home. The government pins the blame on the Tamil rebels. Tamil activists say that the grave lends credence to claims that the Sri Lankan army has systematically hidden evidence of wartime massacres which it committed in the north and east.
In this section
The fate of many Sri Lankans remains unknown. The Red Cross counts 16,000 missing people since 1990, with a surge as the civil war came to an end. Yet the government of President Mahinda Rajapaksa is unwilling to look deeply into the disappearances. The army launched an inquiry which cleared it of wrongdoing. Recommendations from a government-appointed body, the “lessons learnt” commission, achieved little. Last August the president ordered a new inquiry into the missing, which is due to report in August. Critics call it a sham, set up to discourage foreigners from launching more serious investigations. Similarly, official suggestions that Sri Lanka could adopt a South African-style truth-and-reconciliation process appear to be attempts to stall.
Mr Rajapaksa’s administration is only occasionally ruffled. This month, as in each of the past two years, the UN’s human-rights council in Geneva is assessing Sri Lanka’s post-war progress. It will probably conclude that Sri Lanka must do more to account for disappearances, but allow it more time to do so. Last year Navi Pillay, the UN’s commissioner on human rights, toured Sri Lanka and heard of wartime atrocities carried out by both sides, and of government intimidation since. On February 24th she released her draft report to the council, calling for an independent international inquiry, following an effort by experts sent in 2011 by the UN secretary-general. She says she is concerned at the government’s refusal to allow “a credible national process with tangible results”.
This week a British-based group, the Sri Lanka Campaign for Peace and Justice, issued a report with details of rape, torture and murder carried out, it says, by government forces in the north over the past five years. It suggests that such crimes “are still taking place” and warrant foreign scrutiny. Sri Lanka’s rulers see all this as meddling. In recent speeches Mr Rajapaksa has accused his Western critics of duplicity, talking of law and rights when they really want to do down his country, proud conquerors of terrorists. He expects such talk to go down well with nationalist-minded voters. Sri Lankan diplomats flit to Geneva to deflect criticism. They even suggest that Indian peacekeepers, present in the late 1980s, may have carried out massacres. Ms Pillay is unlikely to get agreement on an international inquiry just yet, but one is inching closer. And it is putting pressure on Mr Rajapaksa to make his own investigative efforts more convincing.
Meanwhile, northern Sri Lanka continues to feel like a land under occupation, with an all-pervasive military intelligence snooping on Tamils deemed to be suspicious. The government says it is cutting by nearly a third the large numbers of soldiers stationed in the north since the war. A successful provincial election in September produced a local government led by a Tamil opposition party. Though it enjoys only grudging co-operation from Mr Rajapaksa, progress towards reconciliation is still possible. But the country’s bloody past has still to be accounted for.