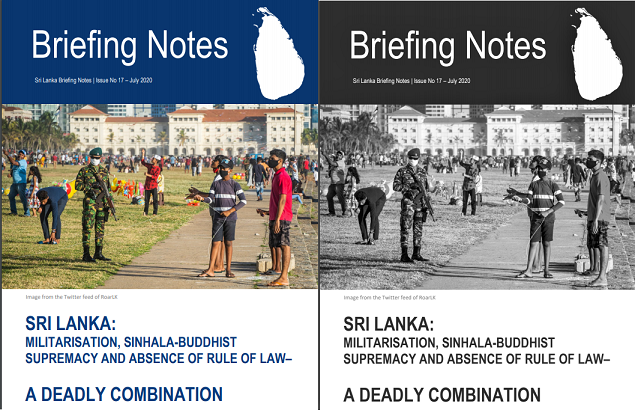 Sri Lanka is slowly emerging from the lockdown imposed to contain the COVID-19 outbreak and heading towards the General Elections that is scheduled to be held on the 2nd August. At this moment, three factors dominate Sri Lanka’s social and political landscape.

The first is the militarization of government and governance. The second is the Sinhala Buddhist supremacy. The third is the non-complacence with the Constitution and the absence of rule of law. All these three factors are inter-connected and inter-dependent, national security being the underlying theme of all these factors.

President Rajapaksa has begun to meet the Buddhist Advisory Council, which consists of leading Buddhist monks, on a monthly basis. This is the only religious body from which he regularly seeks advice. He has appointed another Presidential Task Force that is entirely made up of Sinhalese Buddhists for archaeological heritage management in the multi-ethnic and multi-religious Eastern Province. Amidst all these changes, hate speech against minorities goes scot-free even in mainstream media.

President Rajapaksa has not appointed a Minister of Defence. Currently, the Ministry is run by the Secretary to the Ministry– Major General (Retd) Kamal Gunaratne. In order to control the COVID-19 pandemic, the President used unconstitutional police curfew for months. More than 60,000 people and 10,000 vehicles were taken into custody for violating the curfew. Dissenting voices and actions were suppressed while pro-Rajapaksa forces were given free reign.

This Briefing Note presents opinions and analysis by prominent Sri Lankans as well as civil society organizations on these recent developments.